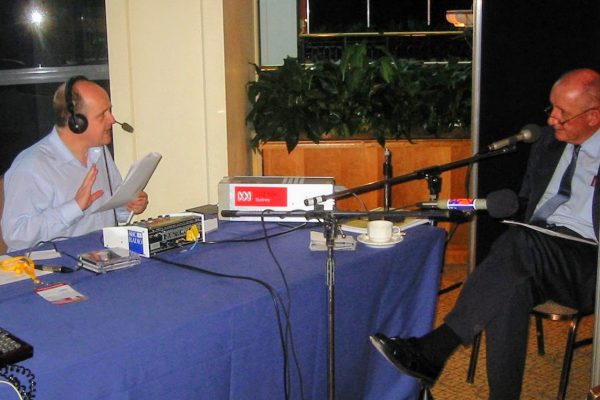 The Boy from Boree Creek

On one side of politics, I’ve had the son a politician threaten me with physical violence over a fairly explosive interview I did with his father. On the other side of politics, I’ve had a former Senator tell me my career was now “fucked” because of an interview I did with him. “Your career at the ABC, mate, is over”, he shouted down the phone line.

Less “explosive” were my interactions with Tim Fischer, who I first met when I was presenting the Morning Show for ABC Radio Riverina in Wagga Wagga. It was the early 1990s, and Mr Fischer, who was then the Member for Farrer, lived about 50km away, at a place called Boree Creek. When he was at home, he would often listen to my program, he told me.

I remember him once calling my producer, Tiffany, saying he was in a hot air balloon and he told her he could describe what conditions were like flying over Hay, in the far western part of the Riverina. “Tim Fischer’s on the phone, flying in a hot air balloon. Do you want to talk to him?”, she asked. It was a Friday morning, it was a bit of “colour”, so of course we put him to air. Delightfully, he described the landscape and his near encounter with some power lines.

On another occasion, I recall getting a call from him one morning just after 7.45 after I’d appeared on the Breakfast Show, previewing what was planned for the Morning Show. “I just heard your preview. It sounds like you’re a bit light-on this morning. I’ve got a few stories I could give you” and he then went on to offer me five “announcements” he could make.

I guess this highlights the often symbiotic relationship between media and politics. The media provides the oxygen; the politicians provide the stories. Many of those of us working in the media would often describe him as a bit of a “media whore”. I don’t know if he loved appearing on radio and TV, but he most certainly knew it was a way of getting his name and message out there to the public.

Though much has been said today of the important and powerful role he played in ensuring the passage of gun laws in Australia, there has also been some some commentary made about some of the misinformation he communicated about land rights. No politician is a saint.

Often, when politicians tell you they’re leaving politics “to spend more time with their family”, that generally means one of two things. Either they’ve lost their steam, or they’ve lost the support of their political allies. When Tim Fischer declared the reason for leaving politics was to “spend more time” with his family, it seemed genuine. He had a family “later in life”, and his son had been recently diagnosed with high level autism. Of course, he kept busy with his various interests, and later became the Ambassador to The Vatican, but his “retirement” seemed genuine. I remember feeling a little sad at the time, because I’d come to know Mr Fischer as a seemingly, genuinely lovely man.

As a boy from the bush, myself, who was also interested in the “outside world”, I connected with Tim. I loved the fact that one day I could be interviewing him about inland rail development, and minutes later, I could be interviewing him about development in the Kingdom of Bhutan. Unlikely many of our politicians, these days, he had interests “outside his portfolio”.

As a person, I really liked Tim, and I was sad to hear of his grave health over the last few days, and news of his death this morning.