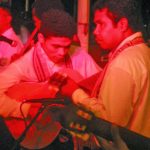 It’s Thursday afternoon and I’m just about to finish work. The last few days have been pretty flat-out and I haven’t had much time to think about writing in this online diary.

Sunday night was pretty amazing. I met Sarah from work for dinner at the local Chinese restaurant, called Yum Cha, before heading off to the Darwin Entertainment Centre for a performance by visiting performer, Steven Brinberg, aka, Simply Barbra. His tribute to Streisand was pretty good and there were a couple of very funny moments, such as when he impersonates just about every “diva” you might want to consider. The fore-runner to the Streisand show was two Darwin-based drag-queens who did a show in tribute to the Chief Minister, Claire Martin. It was worth a few smiles.

After the drag shows, it was off to something far more serious, and far more moving: the East Timorese Independence Celebrations. Since the 1975 invasion by Indonesia, literally thousands of East Timorese have sought refuge in Darwin, many of them still here. As the midnight hour in Dili approached, several hundred East Timorese and supporters gathered to watch the big-screen, to celebrate, and to raise a flag at Darwin’s Parliament House. It was a wonderfully moving experience, especially as one older woman weeped loudly during the flag raising ceremony and thanked the Lord for independence. As soon as I can, I’ll post some of the photographs from the evening.

In the early hours of Monday morning, I returned to work to put together a package for programs. As it was a late night, Monday evening was spent at home, sound asleep, and Tuesday was also rather quiet… just an opportunity to rest.

On Wednesday evening, I joined Penny and a few friends for dinner, before heading off to Darwin Airport, to pick up Kate. We sat around, had a few drinks, enjoyed our conversation and hit the sack.

This morning, Kate and I wandered around town… made it to work at about 10… met her for lunch… came back to work… and now I’m just about to leave. Not sure what the evening holds, but if I should die in a pool of my own vomit… don’t worry about flowers at the funeral!