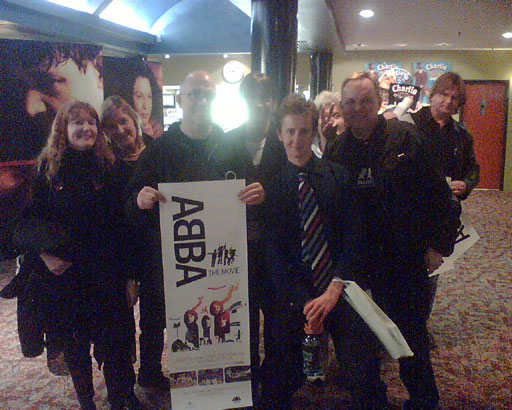 It’s Saturday night and I’ve just been for a walk down the street to get some takeaway Indian food. Oddly enough, it’s been quite some time since I’ve walked down Crown Street on a Saturday night. What struck me most was the large number of people standing on the roadside smoking outside restaurants. Even though we’ve had the new smoking laws in NSW for several months now, I think it’s only this week that I’ve actually noticed the impact.

The other time I noticed it this week was when Kate and I went to a venue called Spectrum (formerly The Lizard Lounge) for a book and CD launch on Wednesday night. As a smoke-free venue, Kate was forced to spend much of the night standing outside on Oxford Street.

For a while, Kate worked as a rock photographer and many of her photographs are contained in the book, Inner City Sound, described as the legendary Australian rock music book (which) is being republished after more than 20 years. To coincide with this event Laughing Outlaw (in conjunction with author Clinton Walker) has compiled a magnificent double CD.. The launch was good, and the band which played, The Plug Uglies were also good, although I thought some of the comments made in the speeches about the musical content were a little self-serving. Yes, it was an interesting period in music, but to claim it (1976-1985) was the only period of history when the music industry failed to listen to the musical tastes of young people was both churlish and inaccurate. Although most of the crowd attending would hate to admit it, they were such classic baby boomers, nostalgically remembering their adolescence.

On a different musical tangent, I also went to the official launch of the DVD version of ABBA – The Movie, filmed during ABBA’s 1977 concert tour of Australia. It was a really great night catching up with all of the usual ABBAmail crowd and it was great seeing the movie on the big screen again. Maybe because it was on the big screen I became aware of so many of the continuity errors in the film, mostly due to the way in which it was made. ABBA insisted the movie should not interfere with the tour, so the filmmaker, Lasse Hallstrom wrote around them. That aside, the concert footage is just fantastic!

One of the other really interesting things I did this week was going for a drive around Castlecrag, which is a suburb of about a thousand houses located only 7 kilometres from Sydney’s central business district, but its careful planning and conservation of the natural bushland enable its residents to enjoy the suburb’s increasingly rich diversity of fauna and flora and wander through hectares of healthy Australian bushland.. Thanks to the design of Walter Burley Griffin, it was like driving around a suburb of Canberra, though of course not as flat.

The other highlight of the last week was going out for Yum Cha with Colin and his niece and nephew in law, who had travelled from Newcastle to see “The Producers”. Great conversation and great company.

Otherwise, a reasonably quiet life with work taking up most of my time.