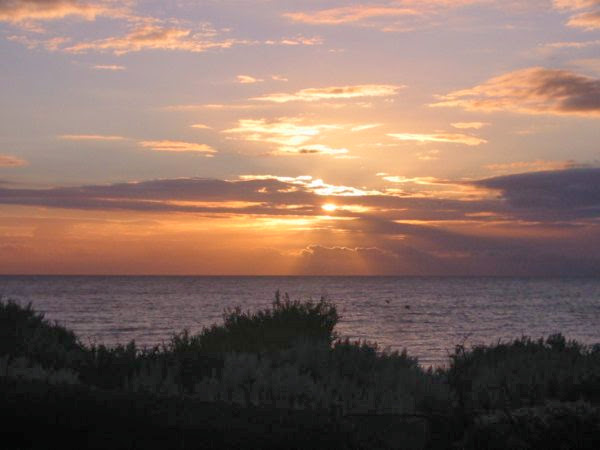 I’ve just returned home from a terrific week’s holiday on the Mornington Peninsula, south of Melbourne. I feel fully rested, have had some terrific experiences and have almost completely forgotten about work for a while (a major goal),In some respects it was a little like going home to Lismore, starting from the flight down. Not being entirely au fait with the geography of Melbourne, I booked a flight through Jetstar which flies into Avalon Airport. When my friend, Sue, told me “Avalon airport is half way to Geelong”, I thought she was just being dramatic. But no, she’s correct. And arriving there was just like arriving at Lismore airport in many ways.

We stayed at the house of a couple of Sue’s friends, Sue and Richard who were away. The house was at Frankston, overlooking Port Phillip Bay, and it was literally a 10 or 15 second walk from the back door to the beach, as this sunset photograph taken from the backstairs shows. In stark contrast to my life in inner-city Sydney, the house Sue and I were staying in was on a really quiet street, with the only noises we heard being that of the ocean and birdlife.

Consequently, we slept in most days until about 10am (or thereabouts), starting off the day with a bit of mid-morning television and breakfast ahead of some daytime wandering, shopping, eating, touring and visiting galleries.

The first gallery we visited was that of Marion Rozestky, an artist who specialises in painted pottery. Curiousity got the better of me, and I asked her if she was related to David Rozestky, to which she replied “I’m the mother of the artist”. I thought this was interesting, as the art group I’m part of, Hawkesbury One owns one of David Rozestky’s works. We spoke for a while about her talented children and about her own late interest in developing her artistic skills. “I still can’t draw”, she told us, “and so I guess that’s why I do dots”.

The local regional gallery, the Mornington Peninsula Regional Gallery had a very good exhibition called, Moist, featuring watercolours from the National Gallery. The exhibition featured an eclectic range of works, including Sue’s favourite, a piece called, “Curtis Dancing On E”. There was also an exhibition by Melbourne print-makers, including one called Lesbia Thorpe? “Do you reckon many children are called Lesbia, Sue?” I asked wyrly. “I’ll suggest it to Karen as she’s looking for interesting baby names at the moment”, she replied.

Visiting the gallery was the first sign of the local sponsorship of Dame Elisabeth Murdoch who lives closeby. Dame Elisabeth has also contributed to the new Royal Botanic Gardens (Cranbourne) which specialises in Australian plants. Our guide, Sue Galbally, told us the gardens had only recently been planted and that it would probably be two or three years before it comes into its own, since most Australian plants are reasonably fast growers (with the exception of the eucalypts).
With an emphasis on the importance of water on the Australian continent, the gardens recognise the many different biospheres, and in a very practical sense for gardens provides recommendations about various plants depending on water availability. An especially interesting aspect of the design was the use of computer modelling to help mimic the sound of flowing water in the bush, and the use of rusted steel to create the nearby escarpment. Overall, a very worthwhile experience and we would both recommend a visit.

When we weren’t out and about, we spent a fair bit of time just relaxing, eating, and watching DVDs. We watched loads of DVD’s including “My Fair Lady”, “Prick Up Your Ears”, “Ride On Stranger”, “Primary Colours”, “Frontline”, “To The Manner Born” and “Six Feet Under”. I’m not sure if the final episode of “Six Feet Under” has screened on free to air television here yet, but I have a preview DVD which we watched. It’s interesting. “A bit surreal”, as just about everyone who appears on television seems to say these days.

Mostly, we ate at home. But when we did wander out, we visited a couple of nice places including the “Flinders Bakery” (for lunch), where we enjoyed some yummy pies, as well as “The Baths” (for afternoon tea) at Sorrento, where the coffee and biscuits were good.

So yeah, it was a pretty enjoyable holiday.