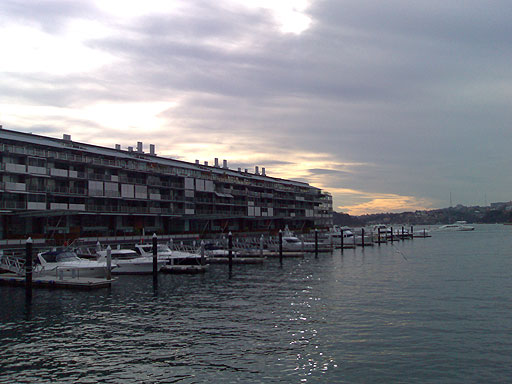 It was one of those really great winter days in Sydney, where the sky is blue, the sun is warm, and there’s lots to do. Although unfortunately I didn’t make it to the Italian Festival in East Sydney, I had a really enjoyable day hanging out around Circular Quay and Walsh Bay.

The day started with a bit of thud when I woke late and quickly realised I was already running late for a preview screening of the new Australian film “Lucky Miles”. The film concerns what happens when an Indonesian fishing boat abandons a group of refugees on a remote part of the coast of Western Australia. For a week, or maybe longer, they wander throughout the landscape in search of the promised land. Along the way, some of them are arrested, while the others face the problems of a lack of food, water, and any sense of direction about where they’re headed.

Like most films, these days, it’s probably ten minutes too long and there are aspects of the film that could have been edited out to achieve that. For example, I thought the film would have no weaker (in fact stronger), if they’d dumped the plotline about the three coastal patrol blokes looking for the refugees.

I think it might have been a stronger film if they’d just concentrated on the central refugee characters, without feeling the need to bring in some central Australian characters. Nonetheless, I thought it was a really lovely film, that was well-acted (mostly) and told a good little story without getting too political along the way. Highly recommended.

And from there it was off to Damo’s place, as we’d made plans to see a couple of talks together at the Sydney Writers Festival. Unfortunately, one of the talks we really wanted to see was canceled, since the author was stuck in Afghanistan.

So with a couple of hours to fill we wandered along the wharf at Walsh Bay, finally settling at a restaurant, Ventuno where we enjoyed a nice bottle of Italian wine made predominantly with chardonnay grapes. They have very comfortable couches, a great view, and the food looked good from a distance (we’d already eaten), even if they did mess up the cheque. “We only had ONE bottle of wine”, I told them.

And from there, we wandered back to the Writers Festival to see the talk featuring Caroline Overington and Alison Broinowski. Broinowski is a former diplomat (she worked with Alexander Downer, apparently) turned academic, with a strong interest in (and supporter of) the United Nations, describing it as “the only things that separates us from chaos”. Overington is a journalist turned author who has written a very extensive book about the Australian Wheat Board “oil for food scandal” called Kickback.

They made no bones about their belief that everyone who claimed to know nothing about the scandal in fact knew a lot. They also foreshadowed class actions and criminal breaches of the companies act, but said nothing would occur this year, an election year.

They both spoke with such an incredible passion. As we walked out, Damien observed they’d both be great fun to have dinner with (including a couple of bottles of wine), though I thought they might be a little scarey. Both, however, appeared to have great minds, a great attention to detail, and a great sense of “the right thing to do”.

So yeah, a great day, with lots to think about. And now, of course, I’m watching “Big Brother Up Late”. A life of contrasts.