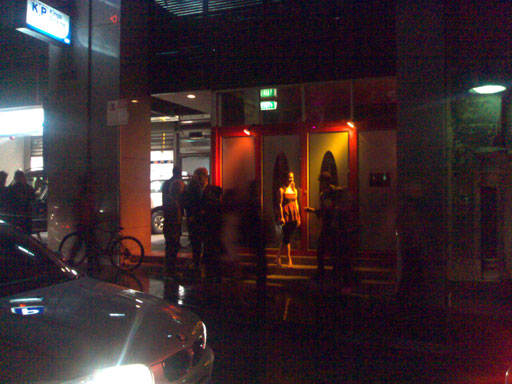 While visiting Melbourne this week, I decided to check out some of those lane-ways and bars that Clover Moore thinks we should have in Sydney. On the issue of bars, I remain open-minded, though a little skeptical. I mean, do we really need even more outlets selling alcohol? Don’t we have enough. And I have to say the one “small bar”, I peered through the window into looked pretty grotty, if you ask me.I’ve was in Melbourne for work, and stayed an extra day or so to catch up with my friend Sue.

As her mum was also visiting, we went last night to see “Priscilla” and we spent most of today hanging out around the city, which is where I saw the laneways. The city was also where I bought a pair of new shoes (half price Julius Marlow), before heading out to have lunch and afternoon tea at Williamstown.

Aside from that brief visit to the city today, I spent most of my time at St Kilda, hardly ever leaving the motel in which I was staying and conferencing. I mean, there was a brief visit to the hairdresser, there was a dinner at “The Melbourne Winery” (I think that’s what it was called) and there was a brief beer at the Prince of Wales Hotel. The reason for my lack of non-curricular activity was the ill-effects of hayfever, due to the beautiful but hay-fever inducing plane trees (Platanus x hybrida) you find throughout Sydney. Thus, after the official work-related activity, I mostly went back to my motel room to rest.

Maybe it’s a factor of having not moved around all that much this time, but I became consciously aware this time of how largely European the population of Melbourne is. When you go to the city in Sydney you’ll generally see a large number of Asian faces, many people from the Pacific Islands, and many people from the Middle East. That was not the case in Melbourne, where the faces where overwhelmingly European (not just Anglo Saxon, but also Italian, Greek etc). It’s something I hadn’t really noticed before, but once I’d made the observation it became more and more evident. Or maybe I just didn’t see enough of Melbourne?

But although seemingly lacking in cultural diversity, Melbourne does have its lane-ways and on the issue of lane-ways, I say yes please. Although I’m not sure how many interesting lane-ways there really are, the two I saw today looked kinda interesting, with lots of interesting places to eat and “to be seen”. Yes, I know that’s often a trait associated with Sydney, and Melbourne readers of this blog would probably hate such a trait being associated with “the cultural capital of Australia“, but I did get the impression Melbourne residents like “to be seen” just as much as those of us in Sin City.

I also noticed today there’s a lot of development going on at the moment, if you can judge that by the number of construction cranes across the skyline. A couple of years ago, NSW Premier Bob Carr declared, “that’s enough” to development, urging immigrants to settle in other Australian capital cities to stop Sydney from becoming over-crowded and over-developed. Hopefully, someone in Melbourne will say something similar sometime soon, lest a very attractive city could lose some of its attractiveness and charm.