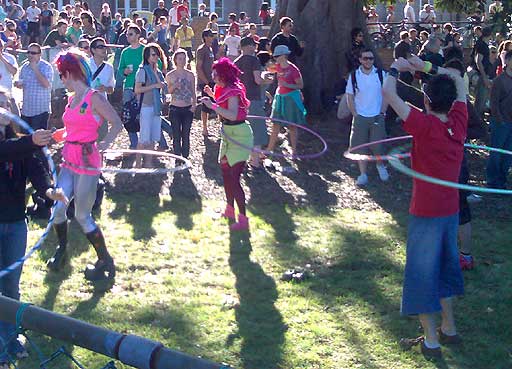 “Have you ever seen the cover of the Shine album by Frida?”, I said to my friend Andrew this afternoon. As soon as I’d finished asking the question, I instantly recognised the obscurity of the popular cultural reference I’d just asked him to consider. Of course, he replied no, but still laughed when I observed one of the women using a hula-hoop in the dance space at today’s Surry Hills Festival looked just like Frida on the front cover of her 1984 English language solo Cd.

“The one in fluoro pink and green with the funny red hair”, I re-assuringly told him, referring to the cover of one of my favourite Frida CD’s, though regrettably an international chart failure as the follow up to “Something’s Going On”. Even at the time of its release, I remember looking at the cover and thinking she looked a little dated in her choice of fashion, though I never said it out loud amongst other ABBA fans. Well, not so much dated, more just, well… you know… just trying… “too hard”.

Actually, I thought the girl using the hula-hoop was kind of cool, really standing out in the otherwise large crowd of people who all looked remarkably similar in their slim-hipped jeans, big sun-glasses, and emu-haircuts (yes, I know they’re emos, not emus, but it makes me laugh to call them emus). Those participating in the festival today hardly represented the great level of diversity that I know and love about those who live in Surry Hills.

Nah, it’s a young person’s festival, we realised mid-afternoon as we walked around the park and, aged in our early forties, recognised we were amongst the oldest people there. It’s really the “Surry Hills Festival” in name only. Even thinking back to when the festival was on Crown Street (oh, I am a long-term local), it was ever thus, despite representation from local groups including the Surry Hills Neighbourhood Centre. That said, we had a lot of fun wandering around for a couple of hours, enjoying the sights, and enjoying the sunshine on an otherwise perfect Sydney spring day.

Afterwards we headed over to the Chinatown for an early evening meal, an excellent $15 special at one of my favourite outdoor eating areas, Hingara. Over dinner we continued to watch the world go by, picking out the tourists, the visitors, and the locals. “I think they’re from New Zealand and mum wants to buy an opal”, Andrew observed as we watched a mum, a son, and a step-dad walk into the souvenir shop across the road. We smiled with recognition at the two young gay guys who sat down at the table next to us on their “first date” (or so it seemed), as one asked the other if he would like to “share a fried rice”. We also smiled in recognition was we noticed the two lead actors from Holding The Man walking around looking for something to eat. For just a brief second we both noticed how “in character” they appeared off-stage also. There’s nothing like a few people watching with a good mate on a Saturday afternoon, eh?