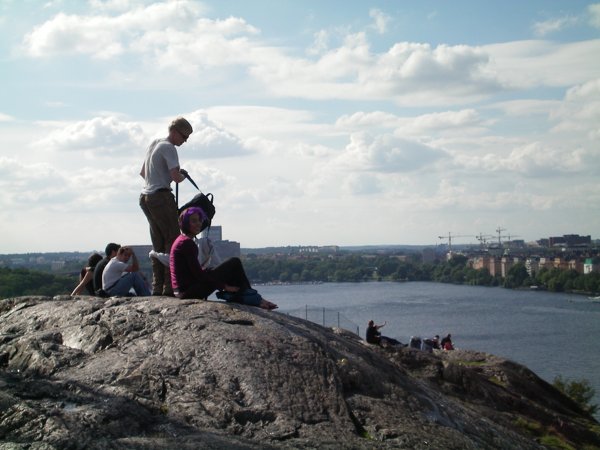 Getting a haircut is traumatic enough at the best of times, let alone trying to explain to a hairdresser who doesn’t speak any English at all, and you only speak Swedish at “toddler level”. “Number one?”, he said, “That’s very short, you know?”.

I’d had a haircut the day before I left and it was a number one then also. I figure when you have as little hair as I do, you just have to go with the flow. And besides, I think travelling is best when you have short, easily manageable hair. Forgetting the Swedish word for bald, I said to him “I don’t have hair anyway”, which made him laugh and so all was fine.

As I haven’t really had all that many in-depth conversations in English during the last week, and since I’m mostly speaking in Swedish (albeit at a three year old’s level), I’ve found my English has also begun to suffer a little.

My other funny language incident occurred earlier today in a shop, asking in English for a new pair of long-length cargo pants. I knew I had no hope of explaining what I wanted in Swedish, so I asked in English instead. The phrase cargo pants wasn’t familiar to the shop assistant. “So not jeans, but pants?”, she asked with a confused look on her face. And it was then I said something to her that even in English that made absolutely no sense at all, as I attempted to explain what cargo pants were.

I’ve also developed this weird kinda accent when speaking in English which is kinda “Swedish-American”, and then sometimes full on “Eurovision English”. I’ve always been one to pick up and mimic accents. Put me in an Irish pub and within half an hour you’d swear I was from Dublin. So I’m picking up the Swedish English accent, which is mostly influenced by American television it seems.

Incidentally, last week when I was chatting to a Swedish bloke in a bar, a group of Americans sat down next to us. He knew they were Americans, but he couldn’t pick the accent, and asked me for an explanation. I told him they were from down south, and one of them was probably from Texas, based on the way he spoke. You forget about the subtle differences you hear as a native speaker that may not be as evident to non-native speakers.

It’s true too, of the way people look. Within the Anglo-Celt oeuvre, I can mostly pick the difference between someone who is American (taller, big smile etc), someone who is Irish (shorter, fatter, hairier, and often have rosy cheeks) and someone who is Australian (a bit like the Irish, but with tans).

And I’m sure there are geographic differences in Sweden too, areas where there are more blondes, or more red-heads, where they’re taller or shorter, which the Swedes themselves can pick, but which I can’t see.