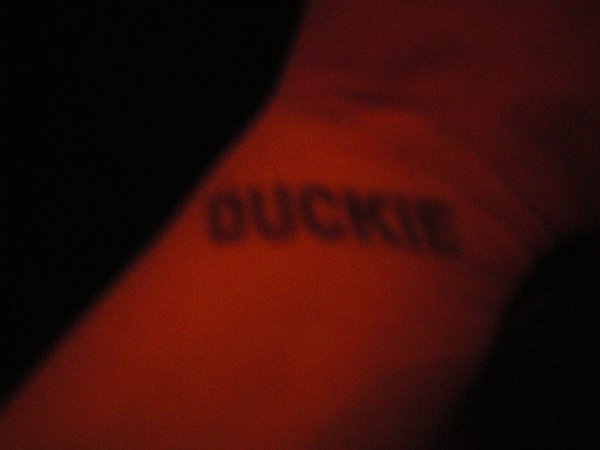 It’s just a day of travelling for me. I’ve got to catch a flight between London and Paris, and when I arrive I’m being picked up by my friend David.

Getting to Luton today has been a bit of an exercise. Paul and I stayed last night at the house of a mate of his (who was an excellent host… and nice bloke… and cute) not far from Wimbledon. This morning we’ve had to travel a long way, and catch several trains, to get back to Paul’s place to pick up the rest of my luggage.

Paul’s been an excellent guide and a great mate to have in London.

Last night we went to a bar called “Duckie”. I don’t exactly know where it is, but it was great fun. “Duckie”, as I recall was the word Dudley Butterfield from Number 96 used when addressing most people. “How are you duckie?”, he used to say, as I recall.

Apparently most of the shows at Duckie are Arts Council (or similarly) funded, so they often verge on the experimental, which makes for a great fun night out. The music also tends to be a little more cutting edge than you would find in a bar in Sydney. But not inaccessible in any way. In fact, it was music totally targetted towards a similarly aged group of men who like to go out on Saturday night for a laugh.