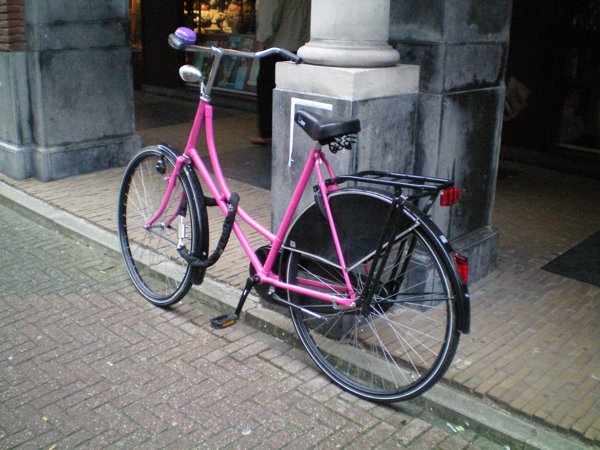 “You should join the queues early”, I was advised by both Marco and Peter. And they were right: the museum queues in Amsterdam are extraordinarily long. Once inside the Van Gogh Museum, I was amazed, first of all, at how many people there were. And secondly, I was amazed at how many people weren’t actually looking at the art. Occasionally, you would see someone peer closely towards one of the paintings. Perhaps they heard heard something on the audio tour, or had read something in the notes? So you would see them peer closely at a work for half-a-second before continuing that slow shuffle.

It’s a dilemma though, isn’t it? On the one hand, the crowds bring in the dollars which makes it possible to support the preservation of these great works. But on the other hand, when you see so many people going through a museum and not really paying any attention, what’s the point? I mean, if there were thousands of people going through, and you saw that each of them had at least one great moment you would think that’s great. But when you look at their faces and they look bored, and they’re only doing this because someone said, “You’ve got to do the Van Gogh Museum” you begin to wonder what’s the point for all involved.

I still enjoyed the experience, though. The audio tour which accompanies the exhibition is excellent. You get a really good sense of the narrative of the life of Van Gogh, and how the ups and downs of his apparent mental illness, and how he reacted to that illness, influenced his work. The audio tour also draws your attention to details of the work in an accessible manner without having to dumb things down.

But you’re also left wondering about some things. I would have liked to have known a little more about his time in what seemed to be mental health facilities. Surely there must be records relating to the illness and the treatments he received? I was also left wondering about the relationship with his brother, Theo. I didn’t quite understand why Theo, for example, advised him to become an artist when, at an early point in his life, he didn’t know what to do with his life.

I was also intrigued by the way in which Van Gogh reacted to the work of his contemporaries. In one instance, there’s a series of paintings which are based on the works of a good mate. “It’s like a musician playing someone else’s work and adding a personal stamp”, Van Gogh is said to have said to his mate as an explanation for the apparent copy. And as Van Gogh’s work didn’t become popular until after his death, I would have liked to have known more about the response while he was alive.

Having seen similarly long queues at the National Museum, I decided I’d forget about it today, and hopefully visit it tomorrow when, presumably on a Monday, the queues are much shorter.

Instead, I went to Resistance Museum which was a far more enjoyable experience. Not as “sexy” to the average tourist as the bloke who chopped off his ear, but a more interesting insight into the nature of the Dutch character, I’d argue. In fact, there’s a comment near the beginning of the exhibition which argues the war-time experience of the Dutch continues to influence the nation to this day. Although it’s not explained in detail what that comment actually means, my interpretation means they believe it lies in the independent spirit of the Dutch people.

Through newspapers, photographs, video, audio (and all the usual stuff), the exhibition describes the impact of the German invasion. Although called the “Resistance Museum”, it doesn’t shy away from recognising that many Dutch people were, initially, okay with the take-over, as life didn’t change very much at all, and there was a certain sense of “German brotherhood”. But the exhibition explains that, as the war went on, and the notion of Dutch identity became less and less, and that as men were forced to go and work in Germany, resistance increased. The story of resistance is told very well through the narrative of three Dutch sisters who were communists and who did everything they could to fight against the Nazis. There’s some wonderful video footage of the three women, today, by the way, reflecting on their experiences.

Also war-related, I visited the Homo-monument which recognises the impact of the Nazis on gay men, and in fact all forms of gay opression around the world. It’s simple, well-signposted, and there was a little “Gay Amsterdam” information centre nearby.

Speaking of which, my friend Graeme suggested I really must visit the Amstel Tavern, now renamed Amstel Fifty-Four. It’s a great little bar on one of the canals – isn’t everywhere? – where they play Dutch pop music from the last forty-years. Occasionally, they’ll throw in another European hit song, such as “Dancing Queen” and “Summer Night City”, and even less occasionally an American hit (there was a song Cher recorded with an Italian singer I’d never heard of before), but mostly it’s Dutch pop. All of it, of course, was totally unrecognisable to my ear. “Do you like Dutch pop music?”, the barman said to me, to which I replied, “No, though I could get to like it. I like schlager”. He raised his eyebrows and smiled and then said, “Yes, it’s fun music”. There were only two bar staff, by the way, just him, a 40 ish bloke, and a slightly older blonde woman. They ran a good bar though, always on top of things, and from time to time, taking around a slice of salami or cheese for the punters to eat on.

I’ve arrived home tonight, having had a really terrific day, and thinking I wouldn’t mind staying for another night. I’m heading off to Hilversum tomorrow to catch up with a colleague who is currently working at Radio Nederland, and was planning on catching the train from there to Berlin. I think though, I’m not done with Amsterdam yet. I think I’m gonna stay one more night.