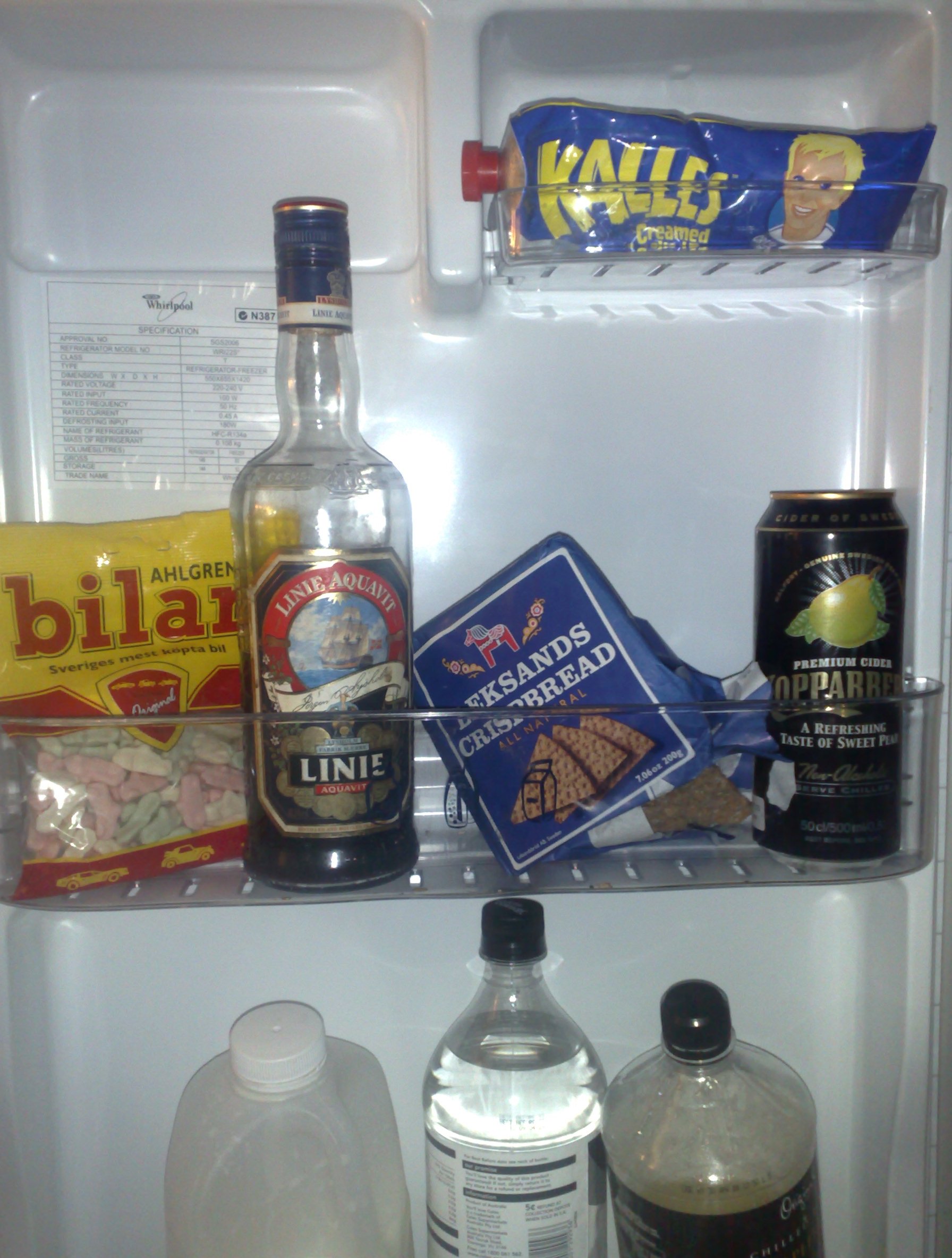 My fridge has taken on a particularly Scandinavian flavour tonight. Yes there’s milk and cereal, some fruit, and a bunch of other regular stuff, but the fridge also contains also a fair bit of typically Swedish cuisine. In addition to the crispbread and caviar in a tube I bought at Ikea the other day, my fridge also contains a half-drunk bottle of Glögg, left over from tonight’s Swedish class. Tonight being, by the way, one of the semi-regular occasions in my Swedish class when we’ve been asked to bring some food and drinks along as part of the course.

But what is glögg? Glögg is the name commonly given to mulled wine in Scandinavian countries. According to Wikipedia….

The main ingredients are (usually red) wine, spices such as cinnamon, cardamom and cloves, sugar or molasses, and optionally also stronger spirits such as vodka, akvavit or brandy. The mixture is prepared by heating, but it is not allowed to boil in order for the alcohol not to evaporate. Glögg is generally served with raisins, almond slivers, and gingerbread, and is a popular warm drink during the Christmas season.

Although I’ve previously bought glögg, from Nordic Fusions at Manly, theirs is the non-alcoholic, mass-produced version. In contrast, the two bottles I bought this afternoon were both alcoholic and homemade at the Gourmet Viking restaurant at Newtown.

“It contains alcohol”, the bloke who runs the restaurant reminded me on two occasions as I made the purchase, prompting me to worry that perhaps I’d bought the Swedish equivalent to moonshine (even though he’s actually Danish). It was definitely alcoholic, I thought to myself, as I drank my cup tonight, along with my classmates. Between about ten of us, we drank one and a half bottles which I thought showed reasonable restraint. That said, I think it’s a bit of an acquired taste due to its almost sickly-sweet flavour.

In addition to the wine, I also took along some crispbread and some Kalles kaviar which also has a bit of an acquired taste. Put simply, it’s “roe in a tube”, and I guess it’s the Swedish cultural equivalent to Vegemite. Once again, thanks to Wikipedia, comes the following entry…

Kalles kaviar is a Swedish brand of fish roe spread. It is manufactured by Abba Seafood. Despite the name, Kalles kaviar is not akin to regular caviar. Its main ingredients are tomato sauce, fish roe and sugar. Kalles Kaviar has been a commercial success in its domestic country Sweden ever since its market launch in 1954. The tube has maintained the same design from the beginning, and depicts the son of then CEO of the manufacturing company. The tube design is easily recognizable, and has become a symbol of 50’s nostalgia in Sweden.

Also in the fridge, I’ve got a packet of a Swedish sweet called Bilar which, according to the packet, is “Sveriges mest köpta bil”. Literally it means “Sweden’s most bought/sold car”. They’re little sweets in the shape (kinda) of a car. I’ve yet to try them, though I’m told they’re quite addictive.

And… I have can of Swedish pear cider, which I also bought at Ikea on the weekend. When I saw it, I was instantly reminded of Europride last year in Stockholm where it was widely sold. I’d never seen it before, so it was also a bit of a cultural surprise for me, but lots of people were drinking it. And so when I saw a can on the weekend, I picked one up purely for reasons of nostalgia.

My fridge also contains all the other usual stuff, but at the moment my fridge has a definite Swedish flavour to it all.