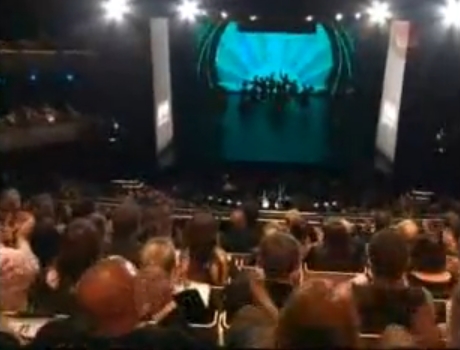 “My God, I hope we don’t end up over the bridge again”, I whispered in Colin’s ear as we caught the shuttle bus from the Opera House to The Argyle for the Helpmann Awards After-Show Party.

It was a reference to a Sydney Film Festival opening or closing (I can’t recall) night we attended several years ago.

On that particular occasion, our bus driver took the wrong turn on the way from the State Theatre to The Argyle and suddenly we found ourselves half way across the bridge.

There was a lot of laughter, and recognition. Who hasn’t found themselves criss-crossing Sydney Harbour Bridge by missing the right turn. It’s a bit like going to Canberra and ending up in a continuous circuit around Parliament House.

Thankfully this time the bus driver found his way correctly, and we were soon happily drinking champagne and eating canapes.

Colin and I had met at 5.30 at Opera Bar where I, in particular, enjoyed the ravioli. Gosh it tasted good. And it was just the right size for a quick bite before a night at the theatre.

“Why are you going so early?”, Colin told me a friend had asked him. “Nobody goes to the early show”, his friend had told him.

“We do”, we both agreed. Even though the awards presented are not major ones, we both agreed it was great fun to go to both “sittings” of the Helpmann Awards, which recognise live performance in Australia.

As such, there was everything from a “physical theatre” group, to straight opera, ballet, contemporary dance, and a rather loud and raucous version of “Women In Uniform” by Skyhooks, though fronted by Jimmy Barnes, and also featuring Diesel.

“It’s a bit of a theatrical fruit salad”, I commented to Colin later in the night.

To attend and to enjoy everything, you really need to have broad tastes in live performance. Luckily I do. And so for me there was some joy in everything I saw.

The only slight disappointment for me this year was that there wasn’t as much comedy as I’d remembered from previous awards. Even though hosts, Julia Zemiro and Jonathan Biggins were both absolutely terrific, I felt like I would have liked a few more laughs.

I remember with fondness The Helen Clarke Five from a couple of years ago, an inspired act featuring Biggins and Phillip Scott who based there act around the song “Take Five” by The Dave Clark Five, but who sang a really funny ditty about New Zealand.

I just love these awards, though, because they celebrate stuff which I personally find incredibly important in my life.

For me there’s nothing quite like a night in the theatre. Unless there’s something deeply troubling you, you can suspend belief for a moment. For a couple of hours you can let your mind wander and focus on just one thing. And it’s mostly always done with the best of intentions – to make people happy, to make people sad or reflective, or just to make people think. Great stuff.

Oh, and I love the champagne and canapes too!

The absolute highlight for me, though, was Liv Ulmann who presented an award. Cool. Nordic. Strong. I love women like that.

As we walked down the stairs I instructed Colin about how to greet her in Swedish – “Hej Liv, välkommen till Australien” – just in case we ran into her at the after party.

She wasn’t there. And it’s just as well, because I’ve since discovered that, despite her Swedish connections, she’s actually Norwegian by birth.