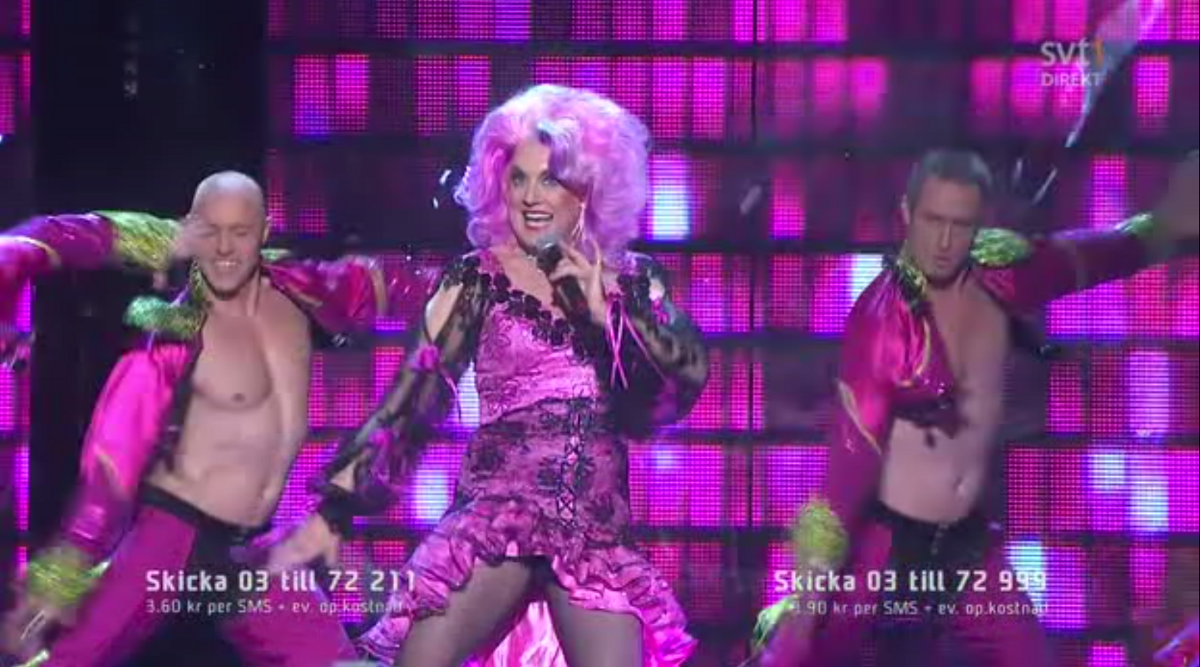 There’s something wonderfully re-assuring about a middle-aged drag queen in a purple wig – think Dame Edna – seeking to represent Sweden in the Eurovision Song Contest.

In the midst of all the young things of Swedish pop these days who sing only in English, it was great to see someone who broke the mould.

Not that it’s all that odd to see drag queens in Melodifestivalen or Eurovision, these days. In fact, it almost seems compulsory to have one.

To win Eurovision, it’s pretty obvious they really need to sing in English these days, but I reckon it’s pretty cool if they could sing in Swedish for the domestic finals. Same for the other countries too.

And besides, singing in English is not without its risks. There was a song this week, for example, “My Heart Is Refusing Me” which I thought had a title which sounded like something Swedish which had been put through Google Translate. It’s like that line from ABBA’s “Fernando” when they sing, “Since many years I haven’t seen a rifle in your hand”. In Swedish it makes perfect sense to say “sedan många år” (since many years), though it fails terribly in English.

The same with ‘Like Suicide” by Christian Waltz. I quite like his work, but you just know you’re going nowhere at Eurovision when you title your song, “Like Suicide”.

Speaking of song titles, there was a repeat this week of a title from last week. Last week, “Oh My God” was a bright, happy pop song by by Le Kid. This week, “Oh My God” by The Moniker was something out of this world with Mika-like vocals, and a guy singing the song who looked like Phil Collins in a Hare Krishan outfit.

I thought the songs, overall, were better this week than last. Despite the dodgy title, “My Heart Is Refusing Me” was probably my favourite from this week, though I also liked Brolle, the uber schlager-campness of Elisabeth Andreassen (who has competed for both Sweden and Norway on many occasions) and the schlager-pop stylings of Elektrisk.

Overall, I’m feeling more confident about Melodifestivalen this week then I was at a similar point last week.