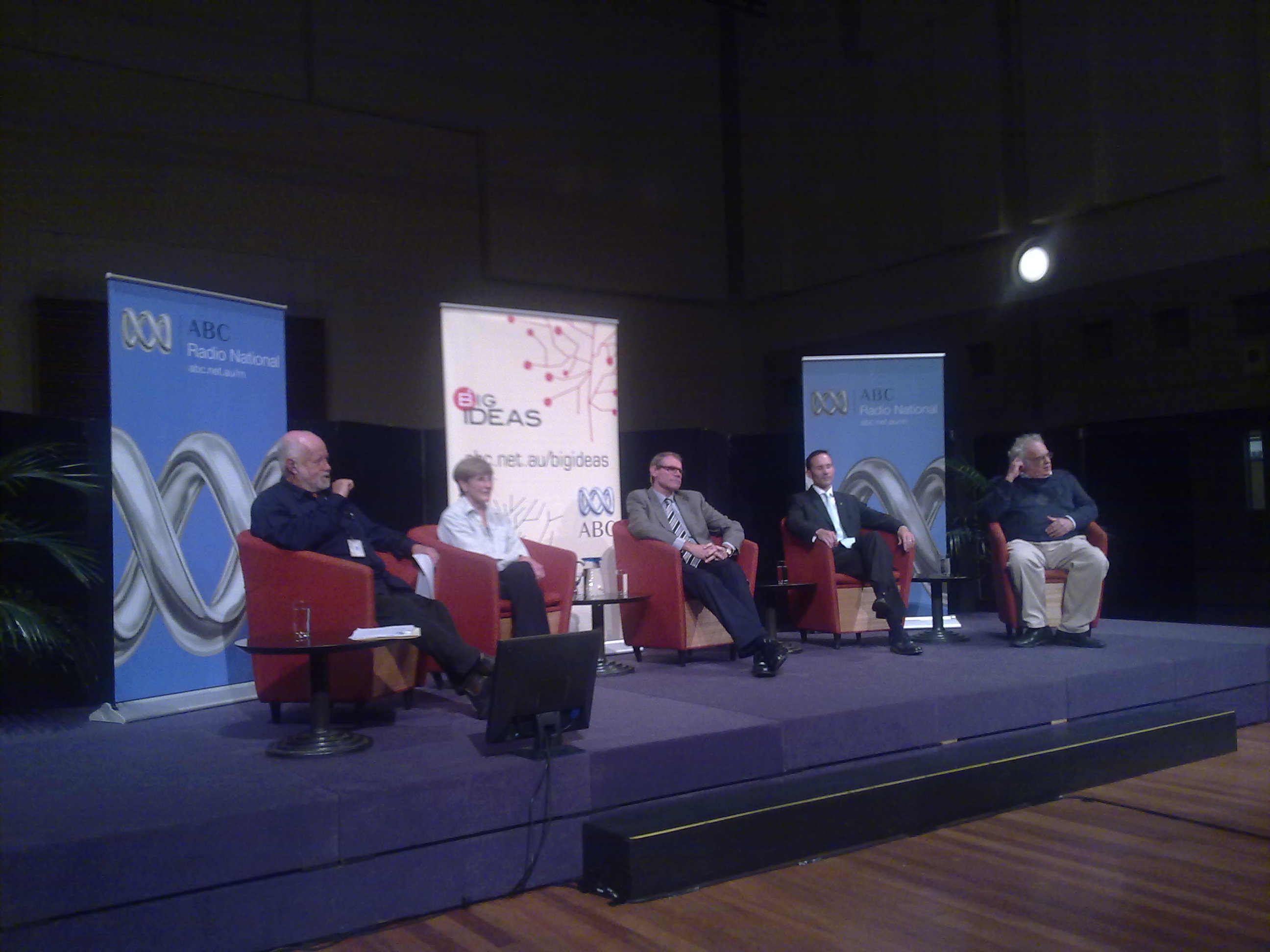 Mondays aren’t supposed to be this mentally exhausting, are they?

On top of enjoying my favourite television lineup of Four Corners, Media Watch and QANDA – which is usually wall to wall politics and analysis – I also went tonight to the recording of Radio National’s “Late Night Live” at the Eugene Goosen’s Hall at the ABC.

The whole premise for the night was the almost complete obliteration of the Labor Party at the NSW election this weekend and what it means for the future of left-politics and the Labor Party in particular.

Phillip Adams opened the discussion with a rather interesting observation about how political parties come and go. He noted several examples from the United States including the near obliteration of the Republic Party with Obama’s win, as well as the disappearance of parties in the past including The Whigs, The United Australia Party (which Menzies transformed into the Liberal Party) and so on. As a student of history and politics, this is the stuff I love. Humans aren’t all that good from learning from history. We’re prone to forget things that happened in the past, and very few of us pay much attention to the affairs of life before we were born, sadly. Thus, I love it when someone reminds you that something seemingly cataclysmic now has happened in the past, I find it both re-assuring and enlightening.

The panel consisted of Deidre Grusovin, John Faulkner, Andrew Leigh and Rodney Cavalier, all of whom represent different parts of the Labor Party. Andrew Leigh is a somewhat fresh-faced (and did I say cute?) Member of Federal Parliament who remains optimistic about the future of the ALP, and in particular, the capacity of the ALP to re-invent itself with a heightened degree of democracy. John Faulkner was one of three people response for last year’s “big review” of the ALP, and who thinks there’s a way forward, but isn’t all that optimistic the power structures are in place to allow such reform. And Deidre and Rodney are both just somewhat dissilussioned. Deidre was the long-serving member of State Parliament who was turfed to allow pre-selection for Kristina Keneally, and Rodney Cavalier wrote a book about the problems of the Labor Party a few months ago called “Power Crisis”.

As I wrote at the time of reading this book..

Cavalier’s central thesis is that: the Labor Party has become increasingly disengaged from the grass-roots through a “take-over” by a “political class” of trade union officials, people with a family connection to previous officials, and an all-too-similar approach to selecting candidates. His thesis seems to be the debate about electricity privatisation was the issue which brought these long-term “worrying” trends to a head. Mostly it was a pretty good read, though I did skip a few pages when it got into almost unbearable detail about the history of Labor governments in NSW. And as I read the book, in the back of my mind, I was reminded of a group conversation I’d had recently with a senior Liberal Party figure in NSW who confided: “Look, we should win, but the Liberal Party has a history of fucking things up at the last minute, so you can’t take it for granted”. The next NSW election could be over in 60 minutes, or perhaps it could drag on for weeks, as it did back in 1995.

My soul contribution to the evening was a rather consistent bronchial cough which I’m sure was driving the producers and technical people completely up the wall.

Here’s a link to the podcast.

To be honest, I don’t know if I came out knowing any more than when I went in. But I do like going to public forums like this. I guess that’s why “Big Ideas” is one of my favourite television shows. In the modern world of instant analysis and feedback, and short-term attention spans, it’s nice to go into an environment where people are actually listening to questions and answers and not spending half their time on Twitter (that’s not to decry Twitter, which I do love).

By the time I got home, it was time to organise something to eat, and then catch up with my Monday night favourites. Although it would have been interesting to stay around for Frank Sartor’s appearance on Lateline which I’ve read was rather interesting and amusing, I was mentally pretty exhausted by that time. And so with a glass of wine I caught up with the tonight’s repeat episode of “Absolutely Fabulous”. Now that’s a Monday night!