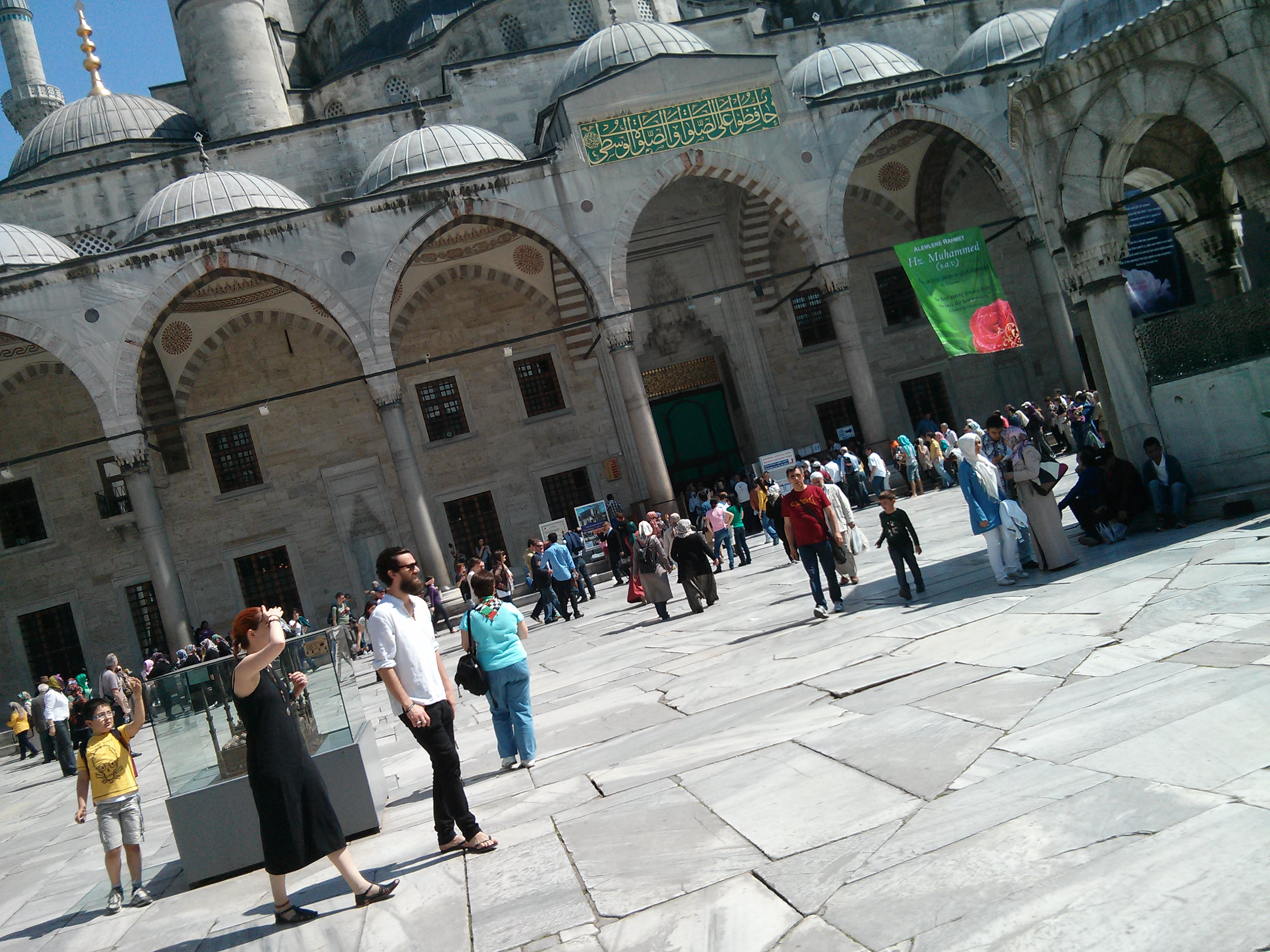 “You’ve dropped something back there”, I heard a young man say to a young woman (who was in a small group) as she walked from Istanbul’s “Blue Mosque”. “Oh no”, I thought to myself, it’s one of those tourist scams like I observed a few years ago near the Eifel Tower. As a reflex action, I grabbed hold of my own wallet in my pocket and looked towards what was going on. Putting his hand on my chest, he said “It was my heart”. I don’t know if it was a pick-pocket scam or a terrible pick-up line, but I kept on walking.

I had something similar happen to myself later in the evening as I walked through Beyoğlu, the nightclub district of Istanbul. I knew the area must have been “trouble” for some tourists, because as the taxi driver dropped me of, he specifically pointed out the police station to me. As I walked along, a bloke came up to me and asked me something in Turkish. I kept on walking, as I didn’t understand what he was saying. “Oh, sorry, you don’t speak Turkish, I was asking you for a light” he said. With my hands in my pockets (holding on to my mobile phone and wallet for safety), I kept on walking as he continued to chat to me. He went on to tell me he was from the Turkish party of Cyprus, that he had been to Australia three times and was going to Perth later in the year to attend a friend’s wedding. He then he asked if I would like to join him for a drink. I didn’t come down in the last shower of rain, had read about the invitations to go to bars that end up costing you thousands and so responded with a firm “No, I’m fine thanks. I’m looking for a specific bar”. “Is it a gay bar?”, he asked me. When I said yes, he responded with a rather blunt offer which, of course, I instantly refused.

Being a large city (13-million people) Istanbul is a city of contrasts. On the one hand you have grand tourist attractions and obvious wealth, but on the other hand you also have the hustlers, the scammers and the extreme poverty. Every city has poverty, but there were some things I saw today as I walked around Istanbul that upset me. In particular, it was seeing children (who should have been at school) sitting on the busy footpath selling boxes of tissues. And it was the babies being held tightly to the by their mothers, as their mothers also sat on the streets and begged for money. I’m ashamed to admit that, like many, my reaction was not to give them some money, but to look away and pretend it doesn’t exist.

Having arrived back in Istanbul at around 11-o’clock last night I went straight back to the hotel and begun uploading some photographs and text from my time visiting Çanakkale and attending the nearby Anzac Day services at Anzac Cove and Lone Pine. By the time
I got to sleep it was one o’clock (or so) and I was really tired from the previous all-nighter. Thus, I slept in until about eleven o’clock. The day started later than I’d planned, but I was just so tired I couldn’t wake up. On top of the all-nighter, I’m also physically a little tired from several weeks on the road.

But I “had” to go and see The Blue Mosque. It was one of those “must do” things I had to visit, I was told by a number of people. It seems as if my friends and colleagues had told many others, judging by the queues to enter the mosque which were very, very long. There were tourist buses everywhere. Included in the large number of people were lots of Australians who had been to Gallipoli. I knew this because they were wearing the “official” Gallipoli T-shirts. Gallipoli T-shirts, shorts and thongs to be precise. “Have you done any eff-ing research about Turkey aside from Gallipoli?” I thought to myself, as I gave the nearby young Australians a “death stare”. Clearly they hadn’t even considered t-shirt, shorts and thongs would have refused men entry to a mosque, let alone women similarly dressed. Thankfully, there was another much quieter couple of young Aussies who had done the research, with one of the girls already with a scarf around her neck, so she could pop it over her head when necessary.

In the end, I gave up on the queue, as it was moving to slowly. I could have spent the whole day in that queue, I concluded. I wasn’t too upset, as I’d already made up my mind Turkey was a country I will DEFINITELY come back to visit, so I’ll get to see The Blue Mosque one day in the future, I’m sure.

And even though I didn’t get to go to The Blue Mosque (which makes me a bad, bad tourist), I did end up at a tiny upstairs karaoke bar in the nightclub district of Istanbul. It was the same bar I went to the other night called Chianti. Many of the same faces from the other night were there also. Literally. With the addition of a young man who was leading the karaoke and a couple of forty-something women who were there for the singing and dancing. Within minutes of walking into the karaoke area of the bar, both had approached me for a dance. There’s a word in Australia for middle-aged straight women who love to hang out in gay bars (a word I really hate, and won’t use it here). I’m sure there’s a word in Turkish also.

All of the songs and all of the music was in Turkish. The music had a reasonably contemporary dance feel to it, but it definitely wasn’t in 4/4. Instead, the music had the sound that’s come to characterise some of the recent entries by Turkey in the Eurovision Song Contest. Vocally, the young man leading the karaoke added to the mixture with a vocal style that was “Typically Turkish” (whatever that means) and to my ears was very much in the style that has been waking me in the morning coming from the nearby mosque.

It was a great way to relax at the end of a busy week travelling in Turkey. I covered a lot of ground and did a lot of great things. I may not have visited The Blue Mosque, but I did dance (badly) with a couple of middle-aged Turkish women at a karaoke night in an Istanbul gay bar, and not many tourists can admit to that.

As I walked today through one of the other great tourist attractions, the Grand Bazaar I also came to a profound conclusion about it. “It’s like IKEA”, I thought to myself, “You come in, you walk around for hours, you buy nothing, and then you can never find your way out”. I’m joking, of course.

Istanbul/Turkey – I’ll be back!