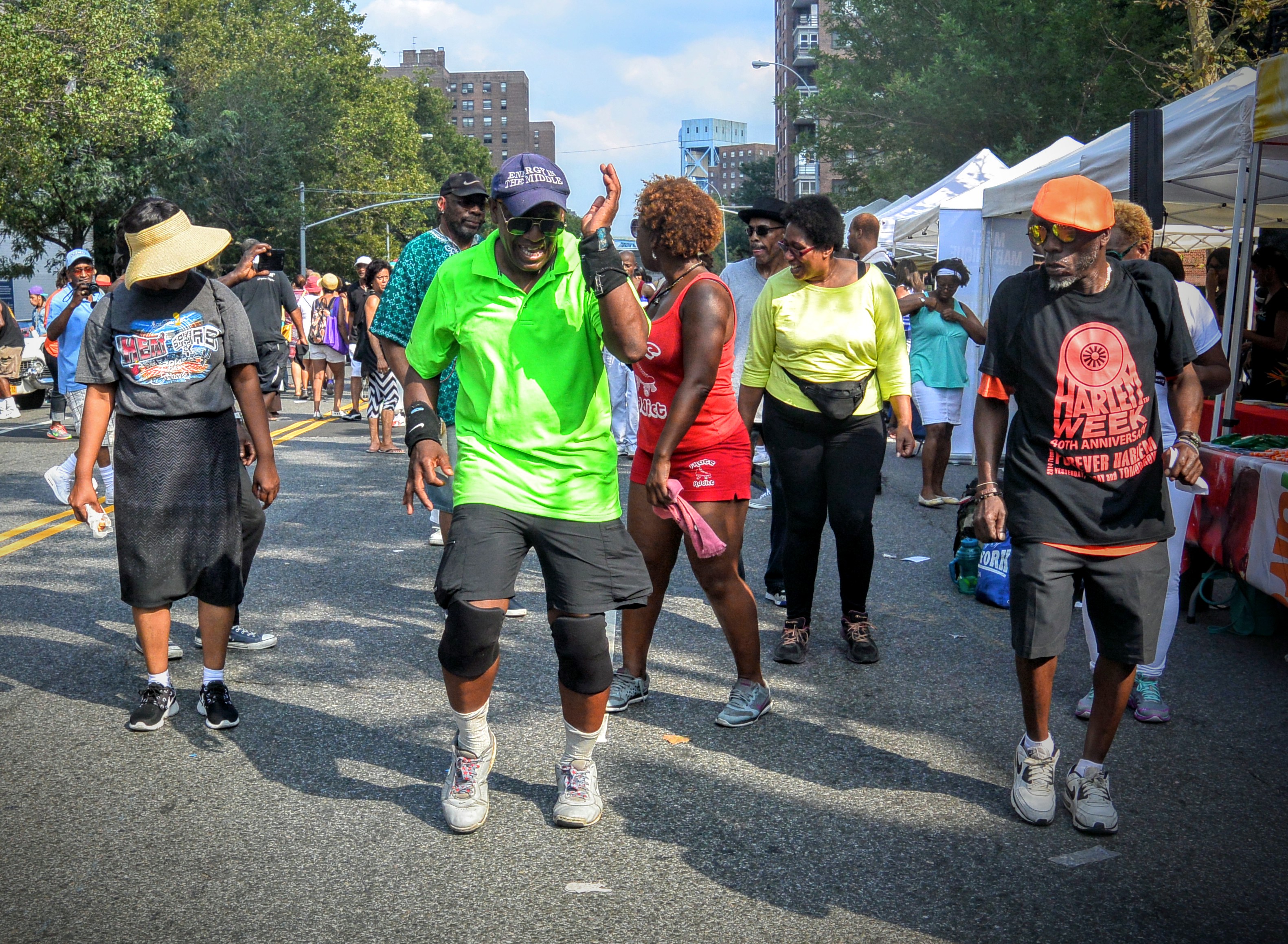 “Honey, you’ve come at just the right time…” we were told by an fantastic looking older woman. “This is Harlem Week” she said with a great deal of passion and enthusiasm. Even though she no longer lives in Harlem, she came back especially for this, she told us. Though we had no idea it was on, it was a wonderful discovery. “If we’d gotten off at 125th street as most people do, we would have missed this completely”, Michaela added.

We had in fact planned to come to Harlem for two main reasons: for Michaela to revisit some of the places she used to live, and to have a meal at a place called “Red Rooster” which had been recommended to us both individually. Though the phrase “Red Rooster” conjures up images of barbecue chicken in boxes, this restaurant has a “modern take” on “soul food” (watermelon salad, fried chicken etc) as well as Swedish meatballs. Yes, köttbullar. More on that later.

The day started with a coffee at Konditori, the Swedish Espresso Bar I’d discovered in our neighbourhood of Williamsburg. They even had kanelbullar (cinnamon buns) on the menu, though there were unfortunately out of stock. The coffee was very good, though not as strong as I’d normally like, and probably not as strong as the coffee you would find in Stockholm’s similarly trendy Södermalm. It was good, though, since I had low expectations about coffee in New York. Over the years, people have told me horror stories of weak drip coffee, whereas all of the coffee I’ve had so far has been quite good. I had a coffee in a diner the other morning that was awful, but otherwise very good.

So after my coffee we set out for the day with three main plans: to meet a friend of Michaela’s at the nearby Brooklyn Flea; to visit Harlem; and to visit the bar, Hogs and Heifers, suggested to us the other day (because it’s a legendary bar which is closing down next weekend).

It wasn’t long after arriving in Harlem that I discovered the main difference between it and Manhattan. Manhattan seems to have a pharmacy on every corner. And when I say pharmacy, I mean places that also sell cigarettes and beer. Go figure. In contrast, in Harlem we only saw a few pharmacies, but we lost count of the number of hairdressing salons.

And upmarket restaurants and bars, as Harlem is going through a gentrification. I won’t share them here, but I took some photographs of a couple of signs which angrily protest the change.

We were so pleased to have timed this visit with Harlem Week, a massive street fair with food, music, dance, history and fashion.

Though it would have been fun to stay a little longer, we needed to head off. We were on a mission to visit New York’s legendary “Hogs and Heifers”. Located in the meat-packing district (hence the name), the bar is being forced to close due to escalating rent. Like Harlem, the area is undergoing massive gentrification, and so the owners can no longer afford to be there.

They can’t afford to repair their pool table, either from the looks of things, with gaffer tape repairs. The answer to why I was playing so badly was also evident in the lack of a felt tip on my cue.

There was a moment when we thought this was honestly the worst bar in the world, as the wait staff were spending an awfully large amount of time talking to each other, and not serving anyone. That’s when we realised, they weren’t employed to serve. Their role was to wear bikini tops, dance on the bar, and to give attitude to the customers, yelling abuse through a megaphone. Once we realised that was the case, we had the time of our lives.

Though there were a few locals there, the customers seemed to comprise tourists like us (we met some Australians, some English and an Irish guy); and a bunch of yuppies who had obviously read about the closure, and decided they would visit. “Don’t you wish you had come earlier. Are you sad because it’s closing…” one of the wait staff yelled with irony and saracasm through the microphone to a couple of yuppies, who obviously had done just that.

“I’m sure they’ll find another place. They’ll be reborn”, a bloke called Byron told me, in contrast, with an almost evangelical tone in his voice.