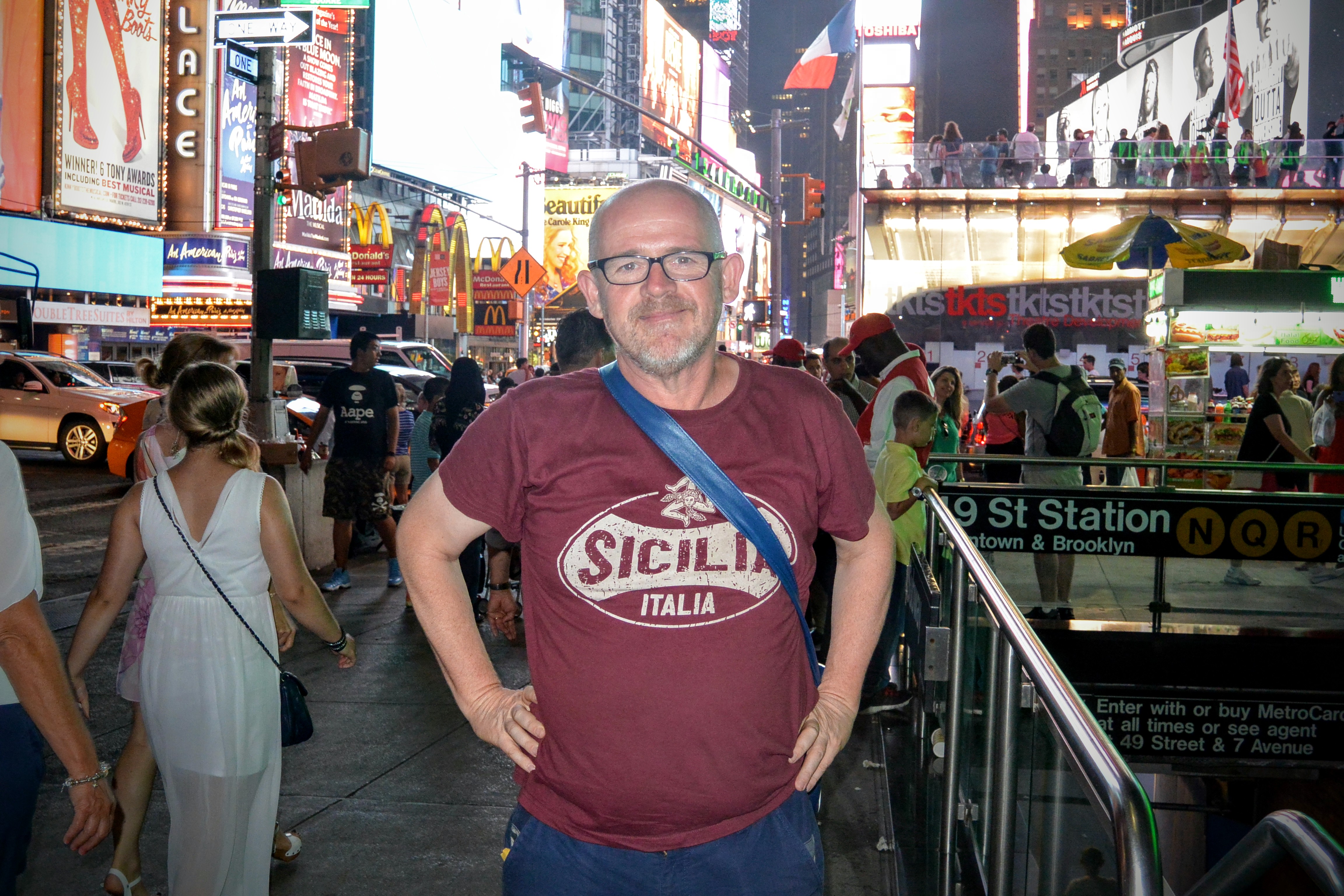 2015 has definitely been a year of ups and downs. Highlights/lowlights of the year have included some wonderful overseas travel, a life-changing meeting with a family member, the near-loss of one close family member due to a heart-attack, and sadly, in the days before Christmas the loss of another close family member due to cancer. In all the years I’ve been writing this “year in review” (since 2002), I don’t think there’s been a more significant year in my life for the highs and lows involved.

Let’s start with the good stuff. Half way through the year I undertook a wonderful overseas holiday, visiting Tokyo, Stockholm, Rome, Venice and New York. Of course I’ve been to Stockholm many times, and love it as much as now as when I first visited in 2008, but visiting the other cities was the first time for me.

I really loved Tokyo. There are many strong memories. For example, I went to an onsen which was an amazingly sublime experience. I also undertook a 26 kilometre cycle tour of the city.

But it was the food that remains one of my strongest memories of the place. The Japanese food we have in Sydney is pretty good, but nowhere near as good as the Japanese food in Japan. I booked to take part in the Tsukiji Fish Market Food Tour.

Over the course of three and a half hours (starting at 8.30am), we wandered around the markets, and tasted dried bonito, Japanese tea, fresh oysters, fried fish cake, sake, and also witnessed the art involved in making Japanese omelettes. And I learned so much on this tour. I never knew, for example, fish with bigger eyes were the ones which you’re most likely to found in deeper water (though of course it makes total sense). I’d also never seen the wasabi plant before, and noted when I shared the photograph earlier today on social media, many others hadn’t either. The tour ended with sushi at a stand-up restaurant called Chiyoda Sushi. There are quite a few of them around Tokyo, and Nori described them as places where you can obtain good sushi at reasonable prices. I thought it was probably the best sushi I’ve had in my life, to be honest.

And once you’ve had “real wasabi”, you’ll never be satisfied with the green-coloured horseradish which we mostly consume.

Rome and Venice were also amazing places to visit. Both were visually spectacular, but also, amazing because of the history.

“You have to remember that for many many years, The Colosseum was like a very big quarry for Rome”, our guide, Alessio told us… on the “Rome In A Day Tour” run by “Real Rome Tours“. “When it was fully functional as an arena, the walls were painted, and there was rock, and bronze and marble everywhere. So that when it was no longer used in that way, they took rock and the bronze and the marble and used it in other buildings projects”, he went on to say. This was possibly one of the greatest personal revelations for me on today’s tour. That, and the fact the modern Rome is built on top of Medieval Rome, which is built on top of Ancient Rome.

And Venice? I vividly remember waking up early on one morning when the alarm went off. For a moment, I struggled to get out of bed.

When the alarm went off at 5.30am, I thought myself “Why am I doing this? Why am I getting up so early on a Saturday morning when I could just stay in bed?” The answer is simple: I wanted to experience the sunrise, and to see Venice before the tourist crowds woke up. I hesitated briefly, and then reminded myself I would otherwise regret this. As I made way down the stairs of the hotel I was staying in, I encountered another guy doing just the same. He also had that early morning “bleary” look about him. But the both of us, with cameras hung around our necks, headed off to the nearby waterfront. It was well worth it, I can assure you. The only people I could find were “locals” setting up for the day, “locals” coming home from the night before, and tourists like myself who like taking photographs. There was a lovely intimacy about being there, as people genuinely stopped to say hello to each other. It must be hard to live in a place like Venice, when there are so many tourists around. But at this time of the morning, before the tourists (mostly) have woken up, it all seemed so much different. There was just one cafe open at this time, and along with two other tourists, we headed in for a coffee, and were “treated” by the woman behind the counter. “It’s no problem”. one of my fellow tourists explained to me was what she was saying.

New York was also amazing. On top of all the iconic spots (Statue Of Liberty, Empire State Building etc), I really loved hanging out with my friend Michaela who joined me for a week. We took an an apartment in Brooklyn which we both agreed was a really fantastic place to stay.

A particular highlight was visiting Harlem. As I wrote at the time…

Honey, you’ve come at just the right time…” we were told by an fantastic looking older woman. “This is Harlem Week” she said with a great deal of passion and enthusiasm. Even though she no longer lives in Harlem, she came back especially for this, she told us. Though we had no idea it was on, it was a wonderful discovery. “If we’d gotten off at 125th street as most people do, we would have missed this completely”, Michaela added.

We had in fact planned to come to Harlem for two main reasons: for Michaela to revisit some of the places she used to live, and to have a meal at a place called “Red Rooster” which had been recommended to us both individually. Though the phrase “Red Rooster” conjures up images of barbecue chicken in boxes, this restaurant has a “modern take” on “soul food” (watermelon salad, fried chicken etc) as well as Swedish meatballs. Yes, köttbullar. More on that later.

It wasn’t long after arriving in Harlem that I discovered the main difference between it and Manhattan. Manhattan seems to have a pharmacy on every corner. And when I say pharmacy, I mean places that also sell cigarettes and beer. Go figure. In contrast, in Harlem we only saw a few pharmacies, but we lost count of the number of hairdressing salons.

And upmarket restaurants and bars, as Harlem is going through a gentrification. I won’t share them here, but I took some photographs of a couple of signs which angrily protest the change.

We were so pleased to have timed this visit with Harlem Week, a massive street fair with food, music, dance, history and fashion.

My friend Colin once told me about New York: “You will love it. You will gobble it up”. He was right, you know. I’ll be back.

And Stockholm, beautiful Stockholm. This time around I took an apartment for four weeks which gave  me a sense of “permanence”. Along the way, there was Stockholm Pride (including a performance by Måns Zelmerlöw), sight-seeing, and generally hanging-out.

I also got to play “host” to an old school friend who was in Stockholm for a few days. I also met an online buddy called Mattias who I’ve been chatting with for a few years. And of course it was wonderful to see Robert and Sandra again. “Did I just hear you make another little sigh…? Sandra asked on my final day in Stockholm. As I wrote at the time…

With only a few hours left in Stockholm before heading to New York, I’d apparently developed a bit of a “sigh” whenever I saw something really wonderful. I wasn’t consciously doing it, though clearly the thought of leaving Stockholm was weighing on my mind. I really love it here, and though I’m looking forward to travelling to New York, I’m a little sad to be leaving. “Sometime we’ll both live in the same city”, I said to Sandra.

A few weeks later I was back in Australia, and I appeared on ABC Radio’s “Nightlife” with Tony Delroy, in his “Travel Spot” talking about Stockholm. There’s a few tips if you’re ever planning to visit this amazing city.

There were lots of other wonderful things about the year, including visiting lots of galleries, and generally “hanging out” with Kate, seeing my friend Michaela on a regular basis, and it’s been wonderful having Sue just a few kilometres down the road, instead of half way across the country.

Work has also been really enjoyable and interesting, and in March I was presented with a 25 year service medal which was very exciting.

I told the story of how I’d once dated a guy at work. A few years later, having broken up with him, I caught up with him and he asked if I still worked for the ABC. When I told him I did, he said, in a very negative tone “I always knew you’d be a lifer”. I told those attending I didn’t see it as a negative, even though in this modern world, it’s generally regarded as odd that you should work for the same organisation for such a long time. I told everyone I’d had so many wonderful opportunities to do so many different things, to live in many different parts of the country, and genuinely love my current job and the people I work with. Receiving the medal was a very proud moment for me, and something I’ll really treasure for many years to come. “It’s my Matthew Mitcham moment”, I joked.

On top of that, I work with some really amazing people.

But it’s also been a year of highs and lows. It’s been a bit of a roller coaster ride for my family this year. Half way through the year we almost lost Nancy. Aged 69, she had a serious heart-attack, and there were a couple of days when we thought she wouldn’t make it through. Thankfully, she survived. In the days leading up to Christmas, however, we lost Margaret (aka Tootsy) after an eight-week battle with pancreatic cancer.

Of the four “O’Brien Girls”, there are now only two left. There have been various other family problems throughout the year which I won’t go into here. Suffice it to say, it’s been a tough year on the home front, and I’ve found myself increasingly providing advice and comfort to my family.

How did this happen? How did I suddenly become the wise, older member of my family? Is it because I turned fifty this year? :)