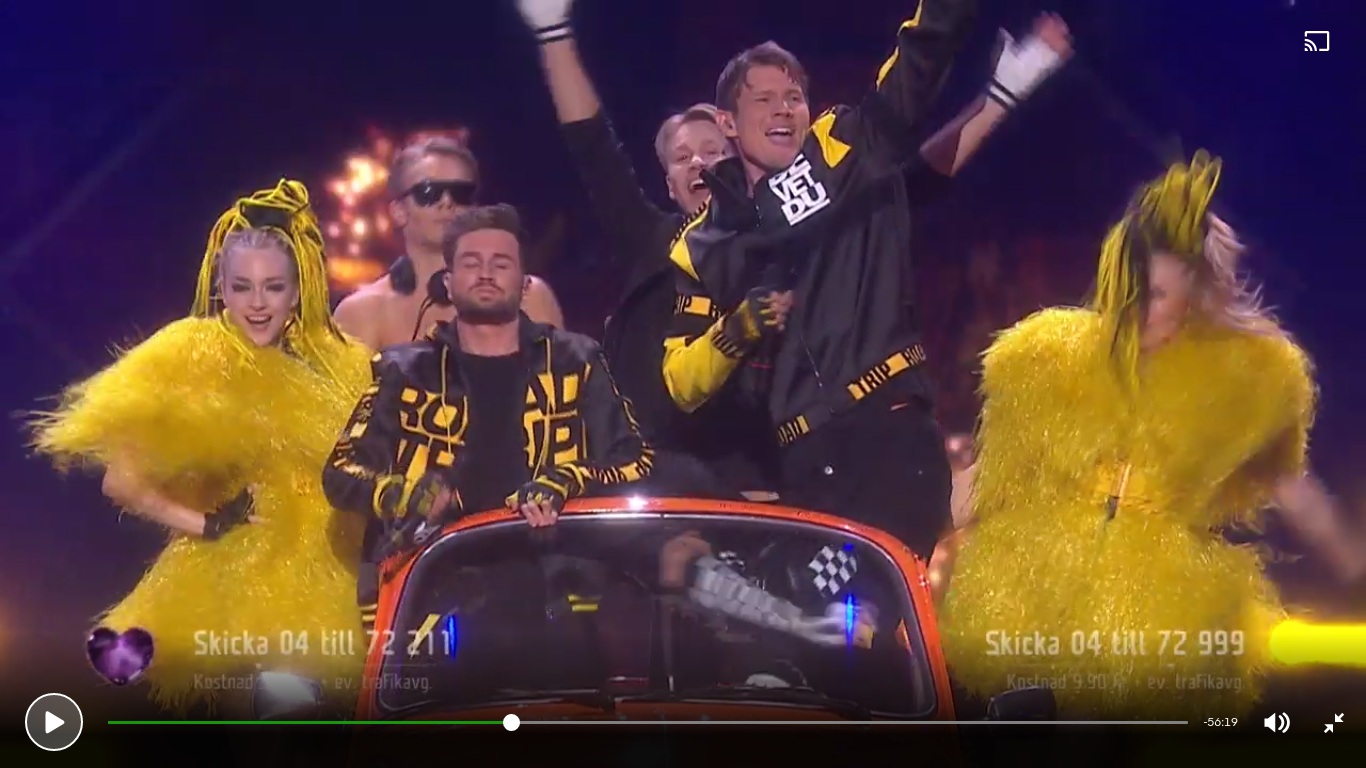 “So that’s what Kris Boswell looks like?”, I thought to myself as I watched the annual contest which chooses the Swedish entry for the Eurovision Song Contest, Melodifestivalen. I knew of Kris, having listened his work at Radio Sweden, and it was great to see him as part of preview show, ahead of last night’s/this morning’s program. The hour was an interesting mixture of Kris’ expert commentary, highlights from the auditions, and some awkward crosses to the arena in Göteborg. The most memorable cross was to a couple of friends, dressed up for the night, wearing feather boas and hats. Having worked in the media for a long, long time, I knew the exact moment when the producer/reporter thought to themselves, “They seemed okay in the pre-interview. Now, how do I wind them up?”.

I love Melodifestivalen. In fact I love it more than Eurovision, as it still has an edginess about it, perhaps now lacking from the European contest, in the age of all of those pop idol shows. Don’t get me wrong. Melodifestivalen has its fair share of pop idol contestants. In fact, they’ve come to dominate in recent years. That said, there’s still the occasional totally out-there contestant or performance. In fact, there’s now quite a formula to the show, as they include artists for every age demographic. Something for the kids. Something for the tweens. Something nostalgic. Traditional schlager. Something lamely funny. A bit of heavy metal. You name it, and it’s usually included. Basically, it’s “Hey Hey It’s Saturday” (Australian reference). Hey, they even had an act this year where the female dancers looked like they were dressed as “Plucka Duck”.

In recent years I’ve also noticed a trend. In the years in which the songs are quite good, the program’s hosts are awful; and vice versa. This year seems to be a year of dull, awkward hosts, but with quite good songs. Or at least, there was nothing TERRIBLE from the first one. So far, I can’t see a potential winner for the overall contest. They usually save the good stuff for later, though I can imagine Ace Wilder winning the overall Swedish vote. Though sometimes they choose a Eurovision-winning entry, often they end up voting for the act with the most domestic appeal.

And yes, they really did say “Melo-fucking-difestivalen” in the opening number. Prime time, family viewing on the state-funded broadcaster. You gotta love the Swedes.