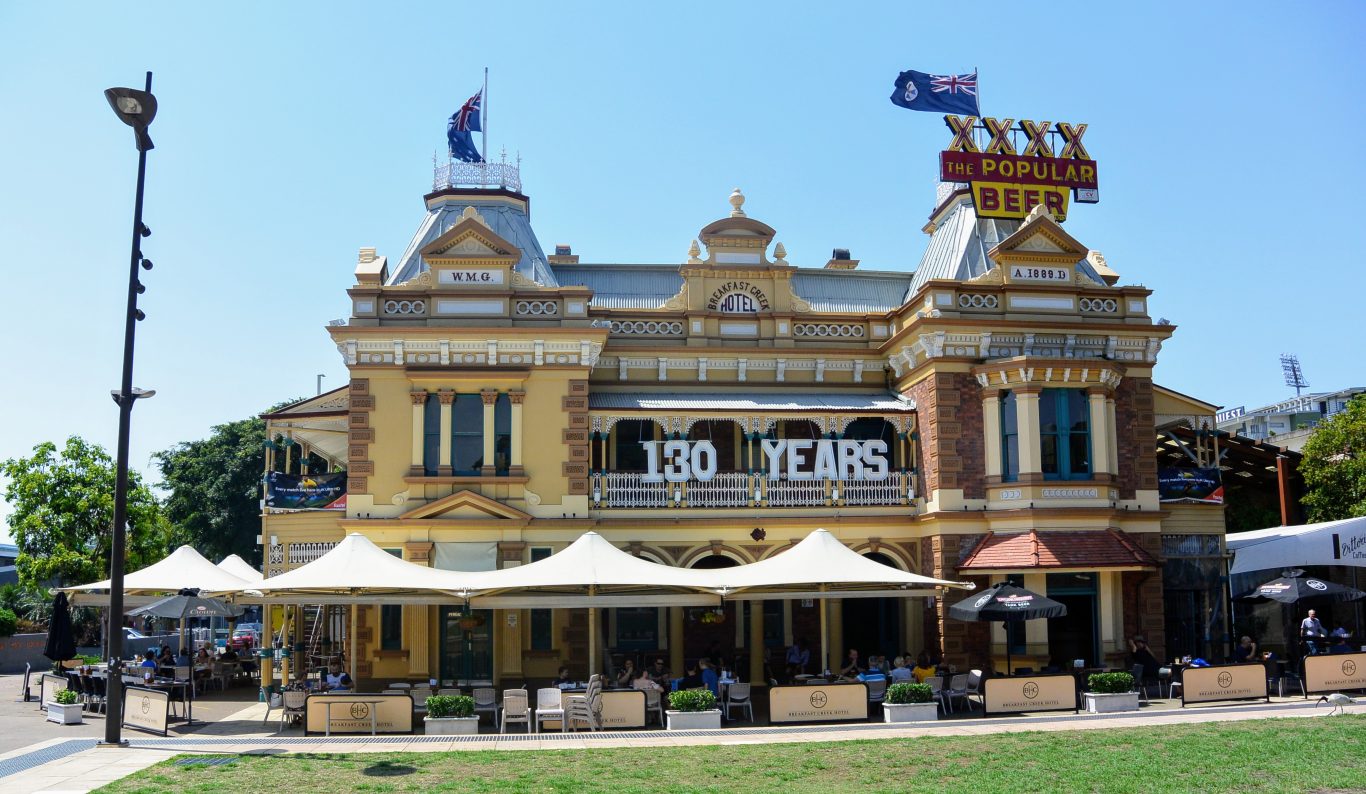 “We’re at the Brekky Creek Pub, I feel like we should have a XXXX”, I said when asked what beer we should have. I was sitting with “Liz”, an 82 year old woman from Melbourne who I’d got to know on a mid-morning tourist cruise of the Brisbane River.

We had only known each other for an hour or so. “Do you have a hat?”, she asked me as I sat down next to her, referring to the Queensland sun. We both thought we had scored the best seats on the river cruise, right up the front, with only a couple of French tourists seated nearby. Our mistake was that we went downstairs to slap on some of the complimentary sunscreen. By the time we had returned, our area at the front of the boat had been taken over by a rather large family group. While Liz stayed with them (“They were very noisy”, she later told me), I headed towards the back of the boat where I could wander around and take photographs.

Liz and I reunited later on the cruise when we realised we’d missed the half-way call. Half way through the cruise, there was an option to get off and have lunch at the famous Breakfast Creek Hotel, and to catch the second cruise of the day back to the city. Thankfully, the two guys running the cruise took pity on us, and delivered us back to the right stop.

“I’m keen for a beer at the pub”, Liz told me. I was then afforded the task of finding the way from the ferry stop.

A few metres down the track, I stopped and asked someone to confirm the direction we were headed in. She recommended a visit to nearby Newstead House.

Over the course of an hour or so we enjoyed a terrific tour, given by a very obviously passionate guide.

We also got chatting with an American couple who are travelling in the US, Australia and NZ for about ten weeks.

Though the tour was very enjoyable and continued for an extra fifteen or twenty minutes, Liz and I were both keen to have that beer.

And then we wandered over to the Brekky Creek. The pub was terrific. Just as I remembered. Out the front there’s a sign which declares the pub is 130 years old. Inside, there are old-style tiles on the walls.

We continued chatting as we waited for the cruise to return, and almost missed it again, as we engaged deeply in conversation.

Liz was a great conversationalist, and was full of lots of wonderful stories of life and travel. She told me she only ever travels business or first class, though this didn’t surprise me, as she had a bit of a “Melbourne Establishment” vibe about her. Later “Googling” confirmed this to be true.

We had a great chat about the pros and cons of solo travel, especially the joy of random meetings and conversations. “Though I travel with friends, I really like travelling alone”, I told her. “I went to Sri Lanka this year”, she told me, as it was exactly half-way for both her and her 85 year old friend from London to meet up. “But that’s it now”, she added, saying she no longer felt comfortable travelling by herself.

It also turns out both her son and grandson work for the ABC.