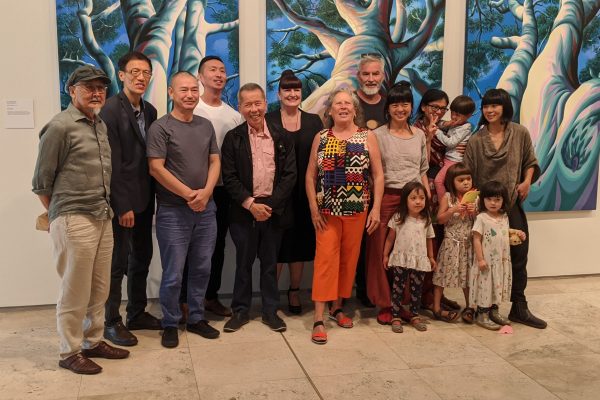 I really love the train trip between Sydney and Newcastle, except of course when there’s track work, and you’re transported by bus instead. It’s only happened to me once. The train trip is, by world standards, already quite slow (almost three hours to travel 150 km), but when you also have to get on and off buses as well, it becomes quite tedious.

Over the course of three hours, however, you have time to think about life, look out the windows at the scenery, and catch up on some listening, reading, watching and writing.

There were lots of very familiar reasons to smile as I entered the exhibition, “Between Two Worlds”, today at the Newcastle Art Gallery.

In fact, two of the art works in the exhibition, I’d previously co-owned (you might say), when I was part of the art collecting group, Hawkesbury One.

He’s such a terrific artist, and has had an amazing life story. China is made up of 56 different minorities, and today he spoke about growing up in a small minority community in China. “Thirty kilometres away people spoke an entirely different dialect”, he said, noting that he learned a number of them during his early life as a truck driver. He was also a member of the Red Army, and fought in the border conflict between China and Vietnam, a conflict that’s not commonly known about in Australia. Eventually he came to Australia as a student, and was granted permanent residency in the wake of the events of 1989. In the last decade he has re-connected with China, and will often return there in pursuit of his life as an artist.

He was one of three artists who spoke today at the gallery about the exhibition curated by Kate. https://catherinecroll.com/

I first travelled to China with Kate in 2010, when she was stationed at Red Gate Gallery. At the time I was there, she was working with a number of visiting Australian artists, including people like Archibald Prize-winning, Guy Maestri, legendary Indigenous artist, Fiona Foley, and, at the time emerging-artist, Francis Belle Parker.

In the time since, Kate has travelled back and forth many times, and has curated a number of exhibitions, including Lunar New Year for the City of Sydney. It seemed to me this exhibition is, in some respects, the culmination of all of the work Kate has done over the last fifteen years, featuring the artists she has come to know well, resulting in a broad, interesting collection.

“Will the exhibition tour?”, someone asked during the Q&A session. “No, we would like people to come to Newcastle”, the Director of the Gallery, Lauretta Morton said.

So my advice for anyone else from Sydney is to hop on the train, enjoy the views through the Hawkesbury, and visit the exhibition. And for anyone else, there’s always Google Maps to get you there.