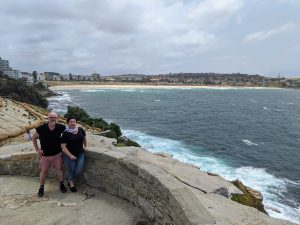 When you have some visiting from the country, and they’ve only ever visited Sydney maybe a dozen times in their life, you have to think about maximising the “Sydney Experience”, and showing them some quite memorable things. So when Michelle told me she was coming down from Lismore for a long weekend, I thought long and hard about what we could do together, and what she had already done.

Manly – done. Opera House – done. Harbour Bridge – done. “Bondi?”, I asked. Not that she remembers, so I suggested we do the Bondi Coastal Walk. I thought “Sculpture By The Sea” was still on, and that would have been great, but it finished last weekend. And lunch? I suggested the Bondi Junction Westfield. Though I know that sounds like a pretty boring suggestion, there’s a bar and restaurant called Kelly’s which has good food that’s well priced, and has awesome views, and we could go it on the way back to the city. When I explained Michelle was visiting from Lismore, the waitress organised a terrific window table.

Michelle is a nurse, which is a good thing for updates on the health problems of ageing family members. On the phone or Skype, you’re never quite sure how serious some of the ailments can be. But face to face you get a better insight, and you also get to know lots of the stories that never quite translate on the phone.

My favourite family story right now concerns Michelle’s father, Jack. Jack’s brother, Bill died recently  after a lengthy battle with cancer. I’ve known them both all my life. Though he was in his eighties, I’ve never known Bill to have a partner. Two of ten children, Jack and Bill were not only siblings, but also close mates.

“We’ve got a problem. We can’t pay for the funeral”, Jack told the funeral director with a straight-face. “You know how you told me I needed to give you a suit to dress Bill”, Jack said, adding “I put the cheque in the inside top pocket”. The joke continued for a while, with Jack saying Bill’s bank account had been frozen. “Is your father serious? I can never tell with Jack”, the funeral director said to Michelle, to which Michelle replied, “I can never tell either”.

We also talked for a while about my fairly vague retirement plans which involve a return to Lismore. I’m reasonably sure a few of my Sydney friends don’t quite believe I’ll do it, as I’ve been living here now for thirty years.

Their surprise/incredulity reminds me of when I was living in Brisbane, and going to university in the 1980s, and then moved to Bourke in Western NSW. Memorably, I received a number of calls from worried friends, concerned that I’d be lonely or bored.

Of course I have similar thoughts/worries myself. There are so many wonderful things about city life, including having good friends closeby. But I’ll have family closeby (which can be a blessing in later life), as well as some creature comforts like a backyard and a garden. And I’ll be able to live a cheaper life, which I hope means there’ll be more money for travel. Or at least that’s the plan.