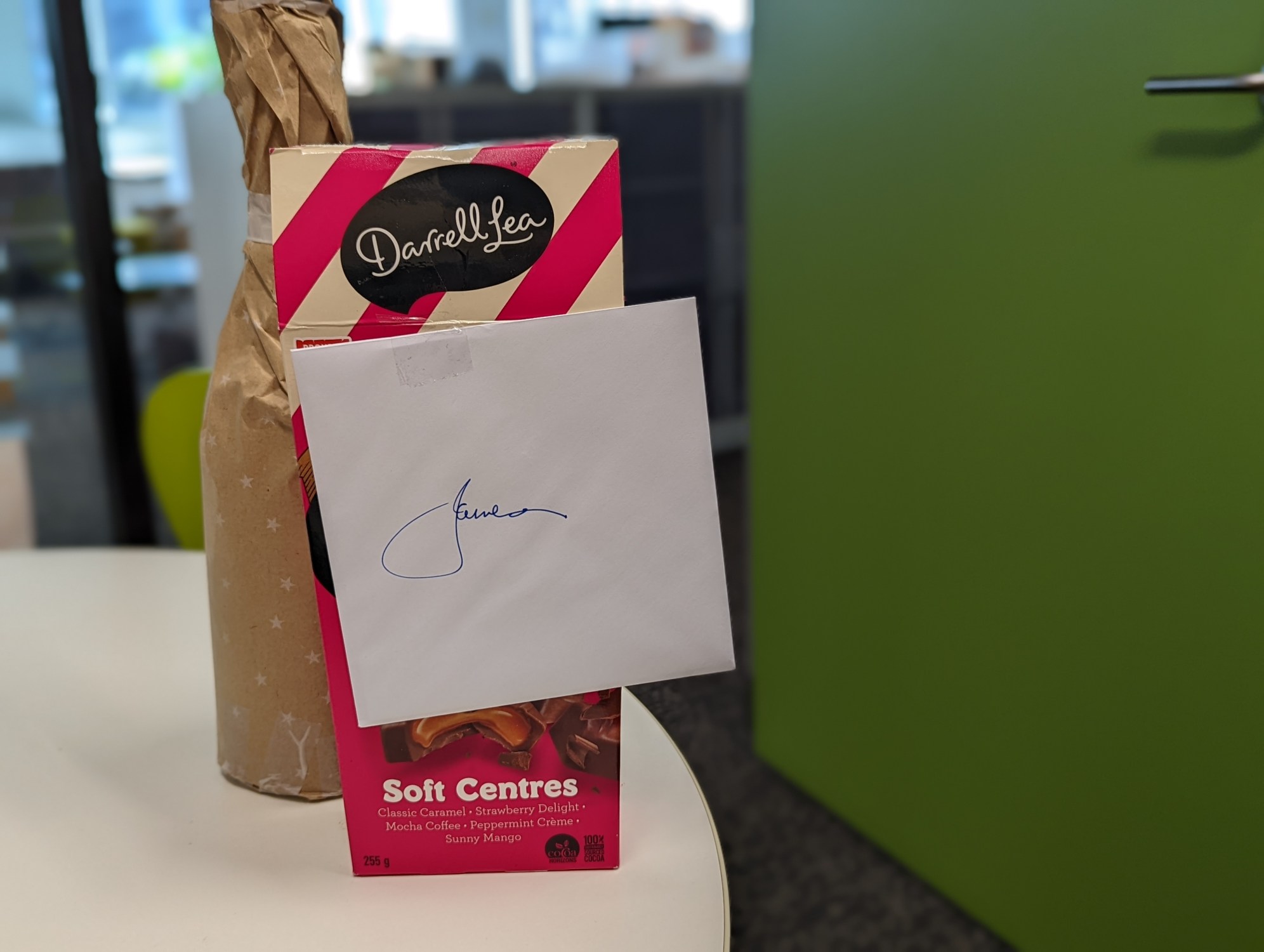 To my delight, I discovered boxes of chocolates and bottles of wine on my desk at work today. As I’ve been working from home for almost two years, I don’t know exactly when they appeared. Thankfully, the chocolates still seem to be within their “use by date”.

For the most part, I can do my work from home without any problem. Even making a radio show is a little easier, as I don’t have to worry about booking time in studios. I can record right into my laptop and then edit from there.

But today I had one of those complicated procedures that involved multiple levels of printing and scanning, and even though I have a printer and scanner at home, it was more of an “industrial grade” activity that I needed to complete. So it was just easier to go into the office.

To be honest, I’m quite embracing working from home right now and don’t really want to return, especially not in a full-time capacity. Without the regular “interruptions” of office life, I feel like the quality of my work has improved significantly. I’m probably a better person, without the added stress of commute times.

On the downside, I miss the social interactions with my colleagues. And there’s the informal work that is often achieved simply by a 30-second conversation in the corridor. To get around this, I’m having to schedule conversations with people I might otherwise have achieved things with, simply through those brief interactions.

And of course, there’s screen time. I had two days this week where I spent the whole day interacting with people on screens. It’s much more exhausting than dealing with people face to face. One day, I was so exhausted I had a lunchtime nap!

My diet has also improved dramatically, as I can cook throughout the day, make nice lunches, and not have to rely on take-away, or heated up left-overs. I think I made THE BEST bolognese sauce of my life this week. At about 7.00 am, I chopped up the necessary ingredients, threw them in the slow cooker, and by lunchtime, I just needed to boil up the pasta, and voila!

I think it’s officially two years now since the first COVID case in Australia? I certainly remember the date we were all sent home: it was March 17, 2020, and I remember that because it’s a family birthday.

I discussed with a friend the other week that dancing was one of the things I miss most about the last couple of years. Though I’m no spring chicken, and my days of going out clubbing are well behind me, there are times when I really like to hit the dance floor. “Palms” is a favourite venue in Sydney, with its 70s-90s music, and its “Blue Light Disco” vibe. Sadly, it’s been closed for most of the last two years. And when it did re-open, I think I found myself a little “out of practice”. It’s just easier to stay at home and watch TV, right? And trying to convince someone of a similar to go out on a Friday night? All too hard. So I’ve been having my own dancing parties at home.

I’ve been catching up lately with “Season 3” of “Succession”. It’s a terrific show which tells the story of a “Murdoch-like” family grappling with the issues of who will take over and how, as the patriarch ages. The script, the acting, everything is “top-notch”. As much as I loved the rich-world intrigue of things like “Dallas” and “Dynasty”, this is not your average rich person soap opera!

Amusingly, there was a report recently that Elisabeth Murdoch had put together a video montage celebrating Rupert’s 90th birthday, and used the theme music of “Succession” in the background.

There are few redeeming features in all the characters, though there are moments of frailty in all of them which make them, somehow, “human”

I gulped down the first two seasons but initially found Season 3 a little hard-going. I quickly realised I was watching it too late at night. It’s a show that requires concentration, but definitely worth getting into, but not when you should be in bed, going to sleep. In Australia, it’s on “Binge”. Highly recommended.