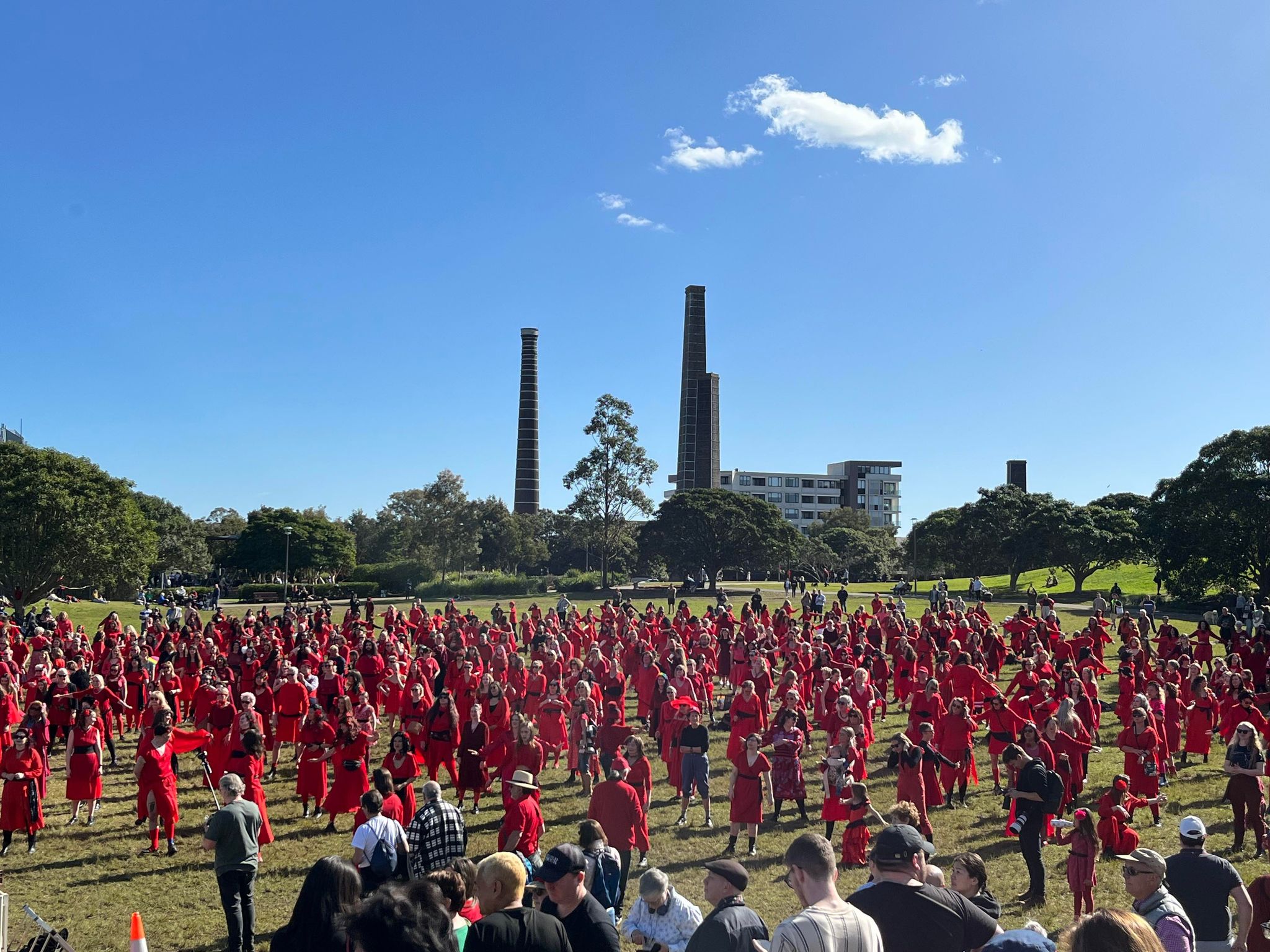 “I don’t remember us wearing our pants THAT high in the 80s”, I said to my friends as the “glass boy” walked past us at the Bob Hawke Beer & Leisure Centre (aka the Bob Hawke Brewery at Marrickville).

The bar is themed around the former Prime Minister, with lots of memorabilia, including signed photographs, the pair of broken glasses he was wearing when a cricket ball famously hit him, the Australia-themed jacket he wore for the 1983 America’s Cup victory, and even the Bob Hawke wine cask holder.

When you go into the men’s toilets you’re serenaded by the sounds of Richie Benaud calling the cricket.

“I don’t think the John Howard Bar would be as much fun”, one of my friends commented.

We had just spent the late morning/early afternoon at Sydney Park where the annual Kate Bush Day had been held. And when I say, “annual”, it’s the first time they’ve held one in a couple of years, due to COVID.

An estimated 300 women (and men) dressed up in the red outfit Kate Bush famously wore in the video clip for “Wuthering Heights”. This happened in Sydney and lots of other places around the world.

Though not dressed up ourselves, we thought it was a wonderful experience. “It’s such a moment of pure joy” we all agreed to watch a bunch of people in a park just opening themselves up to such a gorgeous activity.

Kate Bush is back on the charts with “Running Up That Hill”, and it’s great to see a new generation discovering her music. When the organisers asked who of those attending knew the dance, almost everyone said they didn’t know the dance.

And then on Thursday night, I took another trip back to the 80s by attending the Neighbours finale at the Dendy Cinema in Newtown.

The finale was a homage to the Neighbours of the 80s and 90s, with actors like Guy Pearce, Jason and Kylie all returning. Noticeable, Kylie hardly said a word, whereas Guy played an important role. Spin off?

Despite the 80s/90s homage, there was also a hat-tip to the more contemporary view of the show. These days, Neighbours has a number of people of colour, a trans actor, same-sex couples etc. https://jamesobrien.id.au/2021/09/gaybours/

It was only on a whim to go to see the finale at the movies. I went on the Dendy website to renew my membership and saw it advertised.

I get the feeling it must have been organised by or had a lot of people attending from a Neighbours fan club, as there was a trivia with some tough questions. There was also free popcorn, ice creams and bottled water. Bargain. But, with a more contemporary vibe, you could also take alcohol into the screening. That helped!

Though it wasn’t planned that way, the last few days have turned into a bit of a trip down memory lane.

As my friend commented over our beers at the Bob Hawke Brewery, “things were simpler then, not better, not worse, but simpler”.