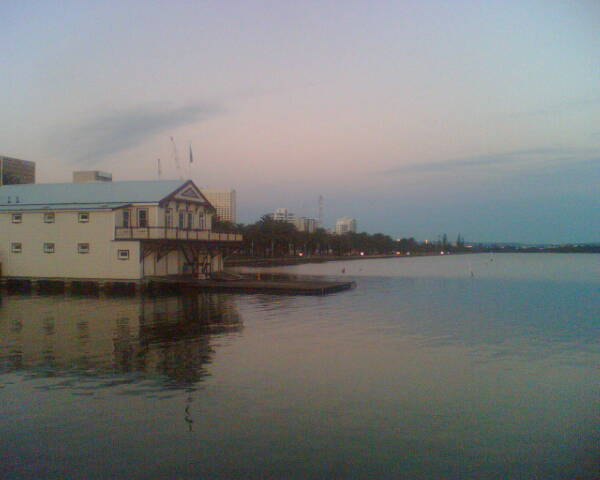 Well here it is, Wednesday afternoon and I’m back home in Sydney, having spent the last four days of so visiting Perth, the city where I spent most of 2004. This was my second time back in Perth and, as with my last visit, I’ve had time to reflect on “what might have been”, had I stayed there instead of returning to Sydney.

I have mixed feelings about Perth. I genuinely feel really very happy when I’m there, but it’s often tinged with feelings of disappointment. I guess part of it is because I’m still a country boy at heart and I really like the fresh air and the open spaces, and part of it is because I really really liked the people I worked with while there: genuinely nice people who I really enjoyed catching up with, including Cellobella. But there’s still the lack of cultural diversity and the sense of isolation that still disappoints me. I don’t think, however, I’m alone in these feelimgs.

I don’t know if it’s new or not, but there’s a loop film at the Museum of Western Australia featuring people from Perth talking about the pros and cons of their city. Watching this film helped me more fully understand my own mixed feelings. The school of thought is roughly divided between those who really love Perth and those who feel it has limitations. Those who speak about the limitations generally reflect on the small population and the lack of cultural and artisitic diversity. Those who love it reflect on the space and the cleanliness of the city and the public transport system. There’s got to be a better reason for liking a city than “it’s clean”.

There’s also lots of things about the small town nature of the place which still annoy me. For example the re-discovery that shops in the CBD still close at 5pm on Saturday afternoon, when I popped into town to buy some of life’s essentials and was told, rather roughly “we’re closed”. There was also the bus that never turned up and the poor quality service you too often encounter. In Sydney restaurants the waiters may look down their nose at you, but at least they do a competent job.

All of that aside, I had really good opportunity to catch up with some really nice people over the last few days. I caught up with Mark, who lived in Sydney until last week on Sunday night at a film festival; Eamon and I caught up last night for a drink and dinner in East Perth; Di and I caught up at The Lucky Shag (yes, it’s really called that) which has spectacular views of the Swann River; while Christian and I had a terrific meal in Northbridge ahead of Saturday night at “The Court”, the local (and really only) poofter bar in Perth.

My mixed feelings about Perth are also exemplified in my feelings about “The Court”. Christian is in his late 30s and I’m 40, and we were close to being the oldest there, with everyone else being in their 20s and being “cloyingly” similar in appearance. I remember in particular, there were two young guys with those fauxhawk haircuts. You know the ones that look like Wylie Coyote after an explosion has occured in “Road Runner” cartoons. There was a real honesty about these two young guys as they jumped around, an innocence I really like, a genuine sense of fun. They were the coolest guys there, but unlike Sydney, they didn’t appear to be off their heads on drugs, and they weren’t obsessed with their bodies. However, the crowd also lacked the diversity I like about Sydney. For example, I don’t recall seeing anyone Asian, anyone over 40, and anyone who didn’t fit within the fairly narrow confines of modern young gay men. I know it was a cold night, but…

But while “The Court” hasn’t improved, I noticed the quality and variety of restaurants has really improved. I had dinner on Monday night at the Must Wine Bar and was truly impressed. And then last night I caught up with Eamon (such a nice man!) for dinner. Wanting to make it as easy as possible for him, I said I’d happily meet him anywhere. When he suggested East Perth, I gulped briefly (expecting it to be still fairly sterile and isolated as it was when I lived there in 2004), but agreed nonetheless. We met for a drink at The Royal Hotel, which was fairly busy for a Tuesday night, before heading off to a very good nearby Thai restaurant. I was truly impressed!

So yeah, there are still things about Perth which annoy me, but I also quite like it too. There’s a good chance I’ll be back in Perth soon, as well as Adelaide and Brisbane. I wouldn’t mind a trip to Darwin though…