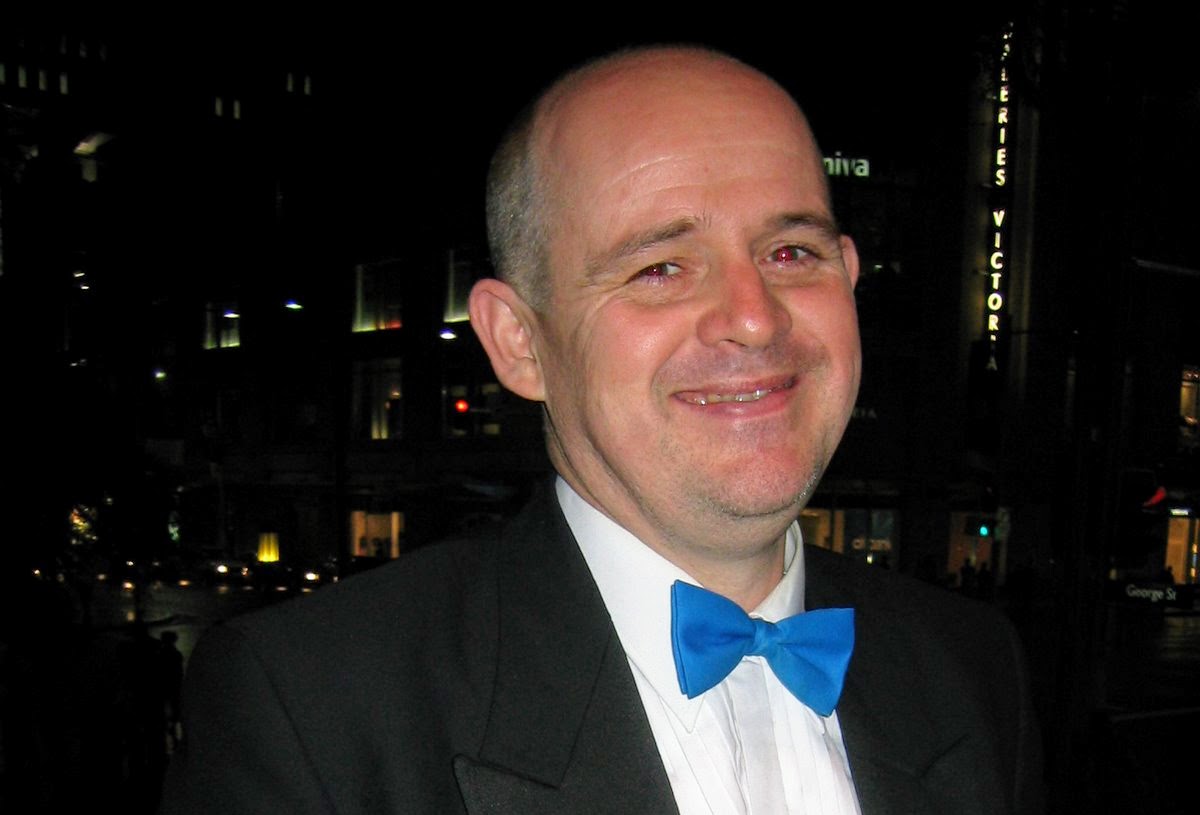 Twelve months ago I was still in the midst of coping with turning forty. At about this time last year I wrote… “Turning forty wasn’t so bad after all, although I did have a brief midlife crisis in the weeks leading up to the actual event. I began comparing myself with others, wondering about the lives of my peers, i.e. who else was born on November 9, 1965, and wondering if, due to a significant birthday, my life was suddenly over. I don’t exactly know why I felt that apprehension, after all, I’m reasonably successful and reasonably happy, I’m reasonably well-balanced and I’m reasonably spiritually content. But there was still, for a while, a feeling of “maybe I could have done something more, something different with my life.”

Highly reflective stuff eh? And that’s what I like to achieve when I write my “Year In Review” post, a thousand-word tome about the year I’ve experienced. The moments of joy, the regrets of another year in my life, or in the words of Mark, an annual re-hash of content from my blog from earlier in the year. But in the spirit of 2006, when we don’t reflect and we don’t seek deeper meaning (or am I being cynical?) and television programs like “20-1”, “My Favourite Album” and the ABC’s current baby-boomer show (whatever it’s called, it’s still awful), where everything is reduced to a “Top 10 List”, I’ve decided to forget depth and end the year with my “best of list” for 2006.

1/…BEST HOLIDAY EXPERIENCE – MORNINGTON PENINSULA: Work has been fairly stressful this year (even more than last year) and I was on the verge of burn-out, when Sue and I had a week holidaying on the Mornington Peninsula. In some respects it was a little like going home to Lismore, starting from the flight down. Not being entirely au fait with the geography of Melbourne, I booked a flight through Jetstar which flies into Avalon Airport. When my friend, Sue, told me “Avalon airport is half way to Geelong”, I thought she was just being dramatic. But no, she’s correct. And arriving there was just like arriving at Lismore airport in many ways. We stayed at the house of a couple of Sue’s friends, overlooking Port Phillip Bay, and it was literally a 10 or 15 second walk from the back door to the beach, as this sunset photograph taken from the backstairs shows. In stark contrast to my life in inner-city Sydney, the house Sue and I were staying in was on a really quiet street, with the only noises we heard being that of the ocean and birdlife. Consequently, we slept in most days until about 10am (or thereabouts), starting off the day with a bit of mid-morning television and breakfast ahead of some daytime wandering, shopping, eating, touring and visiting galleries. When we weren’t out and about, we spent a fair bit of time just relaxing, eating, and watching DVDs.

2/….MOST FUN WEEKEND AWAY – GAY BUSHDANCE: I’d first been to the gay bushdance in Canberra about 10 or 15 years ago, and had enjoyed it immensely. And then a few months ago I had the idea of paying a return visit, especially since a good mate now lives in Canberra. As was the case 10 or 15 years ago, the dance was an absolute hoot. Larger than it was then, and maybe less “authentically Australian country”, and maybe a little more “Brokeback Mountain” this year, I still thought it was one of those great grass-roots events that maintains a strong level of authenticity. I really like the lack of pretension evident at this event, as the inability of almost everyone to dance properly seems to act as a great leveler. It didn’t matter that one of the people in our group was a native French speaker who found it difficult to understand the directions, as we were all in the same boat. Still, I was told by one bloke, a friend of a friend, that I was a good-dancer, so I’ll happily take the compliment. Maybe, like the girl on “Dancing With The Stars” who’d received lessons, I should have revealed that growing up in the country, learning how to bush dance was par for the course. My mate who came with me, Scottish by birth, also said it reminded him of ceilidh dances, with many of the dances common to both. And I guess that’s how Australian bush dances originated, with Irish and the Scottish immigrants. However, I wonder what my Irish and Scottish ancestors, who during the 1800s would have done these dances in nearby places like Braidwood, Bombala and Cooma and Gundaroo (yes, I’m an authentic country boy), would have made of the site of about 500 gay men (and a prominent sprinkling of lesbians) dancing to the tunes they would have also danced to. I suppose, however, in the days when the men often out-numbered the women 10 to 1, and everyone knew everyone else, it may not have been all that unusual.

3/…WEIRDEST WEATHER MOMENT – THE HAIL STORM: In August this year, after an unseasonably warm day, the street I live in was blanketed with hail, appearing in some ways like snow. It’s funny, because as I was walking home, I had an inkling hail was on the way, and then, within five minutes of walking in the door, small hail hard started to fall. For a moment I thought that was it, but then it really started to come down, heavily, for about 20 minutes. An hour or so later, and there was still hail on the ground.

4/…MOST EXCITING NEAR DEATH EXPERIENCE: I almost died this year, crushed to death by a fallen tree. OK, maybe that’s being a little dramatic, but a tree on Crown Street, Surry Hills came awfully close to hitting the bus shelter in which I was seated. Just seconds earlier, I’d crossed the street exactly where the tree had fallen. Seated in the bus shelter, listening to my mp3 player, drinking a soft drink, and watching the world go by, I watched the tree, which was old and shallow-rooted, come falling down right before my eyes, bringing some power lines with it. Yes, power lines! But that didn’t stop idiots from driving through, cutting a swathe over the fallen tree, right over the top of the fallen power lines: a practice the fire brigade and police very quickly put a stop to.

5/…BEST FOOD MOMENTS – VARIOUS: Damien and I went to Becasse for my birthday and, once again, we really enjoyed ourselves, though deep in both our hearts was, perhaps a desire for the old days when Becasse was “our little secret”, before it became the Sydney Morning Herald’s “Restaurant Of The Year”. I guess what I like most about Becasse is their desire and ability to experiment a little. Hence, for me, it was great to start off the night with a dishes including the canape (puff pastry, tomato and goats cheese), the tomato/tea soup and the terrine of golden beetroot and blood orange with a salad of baby cress and Woodside goats curd cromesqui, where they genuinely sought to combine interesting and unexpected flavours. I also really enjoyed RQ (and its off-short “Snakebean”), as well as a “Tapas Night” at the Bentley Bar. Amongst the most enjoyable tapas meals we had were the air-dried beef (my favourite) and the gazpacho.

6/…BEST THEATRE EXPERIENCE – HOLDING THE MAN: Having read and enjoyed the book so much – one of those life-changing books – it was with a certain apprehension that I went along to the Opening Night of the stage production of Holding The Man. “Holding The Man” is both an outrageously funny, yet tragic love story. For me it was probably one of the best nights of theatre I’ve ever enjoyed, with a tremendous ensemble cast and faultless direction and staging, including the use of puppets. Yes, puppets! The care that has gone into making this such a beautiful production is clearly evident. As the cast came on stage at the play’s end, I’d estimate half (maybe two thirds) of the audience were wiping away those sobbing tears that anyone who has ever been in love (and lost love) knows only so well. As we showed them our appreciation with applause, I couldn’t help but notice a couple of the actors with tears in the eyes also.

7/…BEST MOVIE – SA SOM I HIMMELEN: I’m pretty sure the best movie I saw this year was the Swedish film “Sa som i himmelen” (As It Is In Heaven), featuring the Swedish singer and actor, Helen Sjoholm, who has worked consistently for the last decade with Benny Andersson, formerly of ABBA. She was the lead in the musical, Kristina, and she has been the vocalist (muse?) for Benny Andersson’s Orchestra. In this movie, she plays Gabriella, a woman living in a violent relationship. Hers is one of the main, though secondary stories in the movie, which fundamentally concerns the returns to his home town in the cold and bitter north of Sweden story of a famous musician. After suffering a heart-attack, and reflecting on the child-hood bullying he received, the character of Daniel buys his old primary school, in an effort to recover. Although at first, he is a little off-hand with the rest of the community, he eventually becomes a significant part of it. And although the film is often quite bleak, it also has a “feel good” quality to it, as the characters of the small town (as well as the lead), undergo a transformation. The film is beautifully shot, well acted and honestly scripted. I think most of all though, the honesty of many of the exchanges in the film that make it such a good film, with great moments of insight expressed by the characters.

8/…BEST INTERNET MOMENT – TWO FATHERSSurfing around the internet, I found a terrific video clip in which a Dutch teenager sings (in Dutch, but with English subtitles) about having “Two Fathers”, and how they’re “sometimes cool and sometimes strict, but that’s okay”. Sometimes I think the translation is a little clumsy, and maybe not entirely accurate to the emotions he’s expressing, but it’s quite a special little piece nonetheless. This was presumably from Dutch national television. Sadly, it wouldn’t happen in Australia at the moment I suspect, with self-censorship stopping something like this getting to air.

9/…WORST ILLNESS – LOSING MY VOICE: This year, I actually lost my voice for almost a week. In common with three or four others I know, who had the same problej, I actually couldn’t speak. Which has been a shame, because I love to talk. I really love to talk. Perhaps this was God’s way of telling me to shut up for a while and listen to others?

10/…MOST REFLECTIVE MOMENT – THE AMBULANCE ARRIVED: I had a vision this year of my latter years when an ambulance arrived in my street. There was no siren to indicate its arrival, but somehow I knew there was something worth watching, so I got up off the couch and headed to the balcony for a peak. Damn, the phone rang, and so I didn’t really get to see which house they’d gone into and whether or not they’d taken someone away. In my neighbourhood, it could have been everything from a drug overdose to a heart-attack. It might even have been an older person returning home from a stay in hospital, I thought. And that’s when I had visions of my latter years, sitting on the balcony looking down the street, keeping an eye on the events of my neighbourhood. I had visions of my mum and granny who were inveterate “ambulance watchers”. My granny, in particular, would sit at the front window watching the world go by. Suddenly, I was there too!