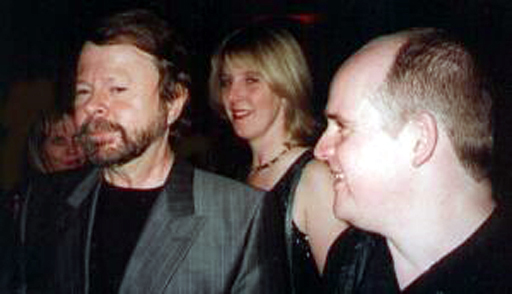 Thirty years ago, this week, ABBA arrived in Australia for their concert tour, recorded famously in ABBA – The Movie. I desperately wanted to go, but in 1977, $58 for an overnight bus trip to Sydney was very expensive. And there was the fact that I was just 11 years old, so my mum wouldn’t allow me to travel. Had they played Brisbane, it might have been another story.

But while I didn’t attend any of the Australian concerts, I did once meet Bjorn Ulvaeus at the “After Party” for the Melbourne premiere of the musical “Mamma Mia”.

Although I wasn’t actually invited to the “After Party”, I had a “Media Pass” to stand on the “Red Carpet” outside as the stars entered the theatre and party location. But as Damien and I arrived a little earlier than expected for the “After Party”, we found ourselves with “Media Accreditation” standing outside, but without any other media in sight.

After a few minutes of wandering around, I summoned up the courage to walk up to the security officer to find out what the planned schedule was. “I have this media pass”, I said, “what do I do”. “Just go inside”, he said, and so we did.

For a brief moment, we toyed with the idea of going into the toilet to “hide out” waiting for the real party to arrive. But instead, we stayed in the foyer chatting with the waiters who, I must say, kept looking at us with that “I wonder who these guys are, but they must belong here, and they must be famous” expressions on their faces.

“Can I have another champagne, please”, I said after a while, as if we really did belong there. “Sure”, they said.

Eventually other people did arrive, and at that point we realised that somehow, uninvited, we were at the “After Party” for the Australian premiere of “Mamma Mia”.

One of my most significant memories of the night was approaching Patti Mostyn, the Australian publicist for ABBA during the 1970s, asking if I could have a photograph with her, explaining that she was a legendary figure in Australian ABBA fandom. “Really?”, she said, seemingly surprised that anyone knew who she was. “Sure”, she said, “But only if you have a picture with Molly (Meldrum) as well”. Reluctantly I agreed.

My most significant memory, however, was of approaching Bjorn for a photograph. Reluctant at first, it was with much urging from Damien and Graeme, that I eventually approached Bjorn. For a while, though, he avoided me. I suspect that after thirty years of being famous, Bjorn now has an inbuilt “fan radar”. Eventually, though, he couldn’t escape and when I asked him politely for a photograph, he said “Sure, but be quick”. And it was brief, as you can see in this photograph. Nonetheless, it’s a treasured memory, even if I look a little over-awed and he looks decidely uninterested. For some reason, 30-something male ABBA-freaks aren’t as interesting as 20-something female musical starlets?

With that ordeal over I went about enjoying the party, which I have to say was tremendous with oodles of food and wine, making it probably the best “After Party” I’ve ever been too. I actually scored a “real invite” to the Sydney premiere of “Mamma Mia”, though tragically I lost it somewhere in the theatre that night. I have no regrets, though. Apparently it wasn’t anywhere near as good as the Melbourne premiere (though it pains me to say that), and there were no members of ABBA in sight.