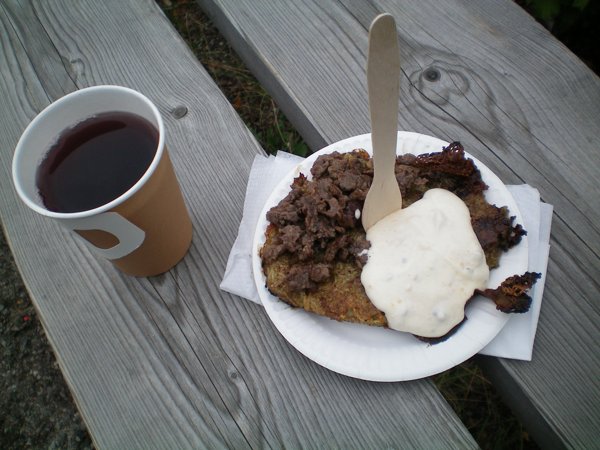 To get to the island of Skeppsholmen, you need to cross a small bridge. Once on the other side, you notice instantly how different the mood is from the main business district of Stockholm. You can hear the birds, most people seem to use bicycles to get around, and there’s a lovely peace about the place. With that kind of environment, it’s not surprising it’s become Stockholm’s “arty farty” island.

I went there with a big interest, this morning, in seeing the Modern Museet (the modern art museum) and a minor interest in the architecture museum. I also knew I could catch the ferry from there across to Djurgarden, another island of museums and the fun park, which was my big plan for the afternoon.

The modern art museum is terrific, and there were several works which took my breath away.

In particular, there’s a terrific work by an artist called Magnus Bartus. Over eleven years, we’re told he cut images out of newspapers and magazine, and then treated them in a special way with wax. He then arranged them hanging inches away from the wall (thus leaving a shadow under each image) in a very large installation piece. I’d estimate it was about 10 metres wide by four metres deep. It’s a truly amazing work and I spent ages looking at it. And in case you’re wondering what it’s about, and what all those images mean, it’s about the collective consciousness.

The other works that really impressed me were by the artists and photographers, Paul and Damon McCarthy. The photographs in this series based on the Disneyland exhibit, “Pirates Of The Carribean” are both spectacular and quite shocking. I noticed one nearby parent moved her children on when she realised just how graphic the works were. I loved how challenging they were.

I thought it was a great little gallery/museum with lots of interesting works. And I feel proud that I stopped myself from tripping up the stupid American woman in front of me who I overheard saying, “You know, it’s not as good as the one in New York”. Grrr.

Just metres away is the architecture museum which emphasises Scandinvian design. At the moment there’s also an exhibition of 12 works by a bloke called Gert Windghardh. Originally from Goteborg, he has designed buildings all of the world. As challenging as they also are to conventional architecture – in terms of shape and form – he says his buildings are all about people.

There’s a quote where he says something along the lines of architects being only able to make recommendations, that it’s people who make choices. My favourite work was an office building which had a great wall of greenery inside.

The island is also home to “Mono Music” which is Benny Andersson’s record company, and the studio where he often creates much of his work. A nice surprise, indeed, to stumble upon it while wandering home. No one was home, by the way.

In contrast to the peacefulness of Skeppsholmen, I was surprised at how busy things were at Djurgarden. You know how there’s about 300 million people who live in America and about 70 million who live in Germany? Well, this morning, most of them seemed to be in the queue for the Vasa Museet, a museum which houses a giant sailing ship. Yes, really…

You know how Australia commemorates the military defeat at Gallipoli. Well, the Swedes have done something similar, building a giant museum based around the sinking on its maiden voyage of what was to be Sweden’s greatest military vessel, The Vasa.

The boat remained preserved for hundreds of years after it sunk, thanks to the unique properties of the local water. The ship was raised in 1961, and since then a museum has been built around the vessell. It’s amazing. Truly amazing.

Unfortunately, I wasn’t really able to appreciate it due to the large crowds there.

Far more enjoyable for me today was the Nordisk Museet (Nordic Museum). Less obviously “touristy”, the museum offers quite a deep insight into Swedish life over many hundreds of years.

I was particularly touched by the Sami exhibit, about Sweden’s indigenous people. I noticed there were similarities with Aborigines in the way in which they self-identify, and in the issues they feel are important. “Swedish is my nationality, Sami is my identity”, was a memorable quote from one of the people featured in the exhibition.

I also found it interesting to read a quote somewhere about how Swedes had gone from being one of the poorest people in the world to one of the richest in a short period of time. With that thought in mind, I began to understand a little more about the Swedish psyche, and particularly their interest and desire in the collective.

It’s also evident when you go to Skansen, the nearby open-air museum. They have community singing on a Tuesday night over summer called “Allsang Pa Skansen”. Can you think of anywhere else in the world where they televise community singing?

I was there for the dress rehearsal this afternoon and both saw and heard Swedish singing legend, Little Gerhard, as well as current pop sensation (and spunk) Brolle.

Also wandering around the park I saw Swedish comedian, Bjorn Gustafsson. I’d first become aware of his work due to Melodifestivalen, the Swedish finals for Eurovision. His comedy is both wordy and physical, and he has developed a bit of a fanbase amongst some of my ABBA-loving friends.

He was sitting with two friends having lunch in the park, and I had just about summoned up the courage to go over to him and say hello. Unfortunately, a bunch of fifteen year old girls beat me to the chase. He then moved quickly away. It’s probably just as well, as I’m not sure how he would have responded to me informing him there’s a bunch of mid 40’s gay ABBA fans in Sydney who also think he’s fantastic. Actually, he probably would have it enjoyed it.

Minutes later, he was standing next to me as I was looking at one of the exhibits, and for a moment I wondered if I should have said hello then, but the moment had passed. I assume he’s going to be appearing tonight as a special guest on Allsang.

Oh yeah and there is an ABBA connection. Well, quite a few actually, including the artist studio for Julius Kronberg which I visited today. A giant painting inside the studio was used as the backdrop for ABBA’s final studio album, “The Visitors”.

This is my last night in Stockholm, before heading off to Kiruna and then Narvik (in the far north of Norway) tomorrow. A plane then a train will take me to the land of the midnight sun, where I intend to relax for a bit. After the last few days I’m gonna need a holiday. My feet ache!

I’ll be writing regularly, though I’m not sure how often I’ll be posting. You might end up with half a dozen posts at once. After the crack-a-jack pace of the last few days, I’m looking forward to a few days of doing nothing, relaxing. Maybe watching the birds, going bushwalking, all that kind of palarva…