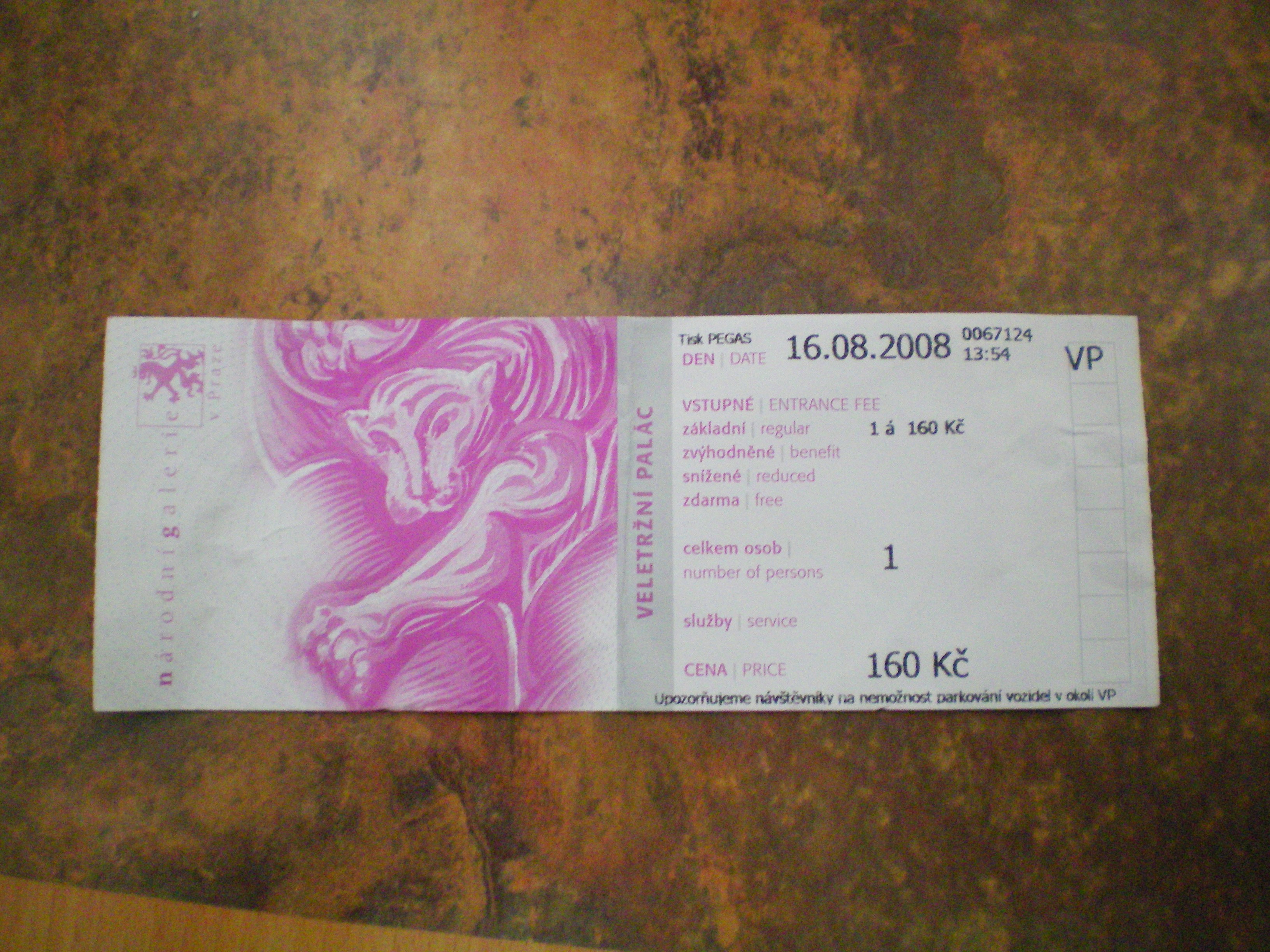 Although I’m sure it would have been useful, I’ve been holding off on buying an umbrella while travelling. I’ve been thinking it’s just one more bit of crap to carry around. And besides, I have a very good leather jacket, which is both warm and water-proof, and I also have a cap that keeps my head dry, which is surprisingly important if you’re follically challenged. But today, after the second continuous day of rain in Prague, with my cap soaked through, I bought an umbrella.

It was one of those cheap ones I knew would only last a day or two. For only $3 Australian, I’m please to say it’s survived the day reasonably intact. But yeah, crap. And remember those underpants I bought in Latvia or Estonia (I don’t remember)? Well, they’ve turned out to be pretty crap also.

So with terrible weather today, I looked for something totally indoors to do. I noticed the other day a poster for the International Trienalle of Contemporary Art at the National Gallery of Prague, and so I’ve spent most of the day there.

It’s a really great overview of a range of contemporary visual art, including painting, photography, sculptures, installations and video. There is so much to see in the exhibition, it’s almost exhaustive to recount what I saw on about four separate levels of the gallery.

The most memorable works for me, though, were the following.

* A black on black landscape piece by Sven Druhl. It’s a forest scene and it’s just beautiful, even though everything is painted black.

* Chi Peng has a wonderful large photograph which portrays a field of hundreds of Buddas.

* Jae-une Choi has a great four-screen video piece where he does four individual dances to a simple atmospheric piece of music.

* There’s a very moving piece by Adi Nes which is a series of photographs of modern people, many of them apparently homeless, portraying stories from the Bible.

* Mariusz Waras has a great piece called “Drop & Drag City” where people are encoured to interact with the art, to actually move magnetic buildings on an imaginery city themselves. Great fun, and apparently you can do it online too.

* Marek Schovanek has an inspired piece which portrays a series of mounted throphies, like the ones you see with stuffed animal heads. Instead, because we don’t hunt anymore, he’s used parts of shopping trolleys to imitate the antlers.

* There’s also a very funny photograph, based on that famous painting of dogs playing poker called “Monkey Disco” which is just as the name applies.

In other news, I’ve decided I’m going to campaign for smoke-free bars in Prague. Although I’ve never smoked a cigarette in my life, I’ve never been to much of a fascist when it comes to smokers. I wouldn’t have anyone smoke in my house, but I don’t get upset if a friend and I have a glass of wine together on a balcony or something like that, and they smoke. Mostly, it doesn’t worry me.

Here in the Czech Republic, however, they don’t appear to have any anti-smoking laws at all. And it’s awful. Last night, for example I went in search of a friendly little bar I’d found on the internet called, “Friends”. It’s a nice enough place, mostly inhabited by men my age, and ten years younger or older than myself. But everyone smoked! It was like the smoking room at Changi Airport in Singapore which is disgusting even from the outside.

Thankfully though I found another place called Valentino, located about ten minutes from the hostel at Vinohradska 40. Although the restaurant/bar section you walk into can be a little intimidating, it’s much better downstairs where there are two more bars. One plays lots of camp and girly stuff (along with some disco classics), and even the occasional Czech language pop hit. The the other plays more “serious” dance music. You know: the stuff you can’t sing along to.

There was a really great vibe about the place, with lots of smiling faces without the chemical reliance you often see in Sydney. That said, I thought the “serious” dance space was on the verge of developing a little bit of that awful generic western gay ‘tude. Or maybe there were just too many tourists there?

But one of the best things about the place is they seemed to have got their anti-smoking ventilation system working pretty well. And although I was only there for a short while, I’ll probably head back there again sometime. Maybe tonight?

I don’t know why I needed to go looking for a gay bar though, as it seems I have one right downstairs in the cafe of the hostel where I’m staying. In the midst of the UK lager-louts, there’s a surprising number of gay men staying here (mostly with their “best female friend”). It must be the furnishings.

Actually I probably will head out for a drink and a dance tonight at that bar just around the corner.

I hope the rain clears up though, as it’s starting to shit me a bit. On our tour yesterday, the guide showed us the level of the last big floods six years ago which affected the Lower Town. It reminded me of when I was in Germany at the age of 17 when, visiting Cologne, I was there for the start of their big floods. Hopefully, that won’t happen here.