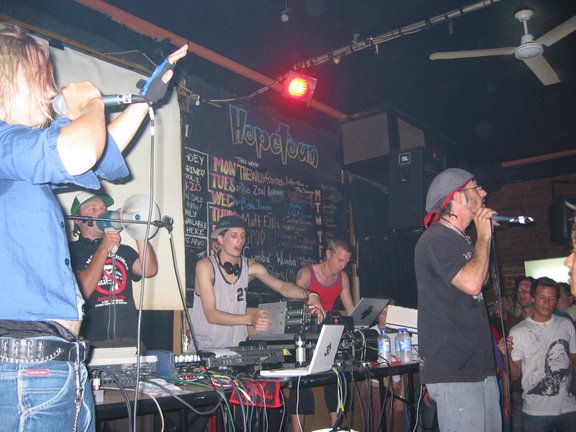 My Friday night has been divided into roughly three acts.

The night started off at the Christmas Party of Friends of The ABC. I was invited along as Tony Delroy was recognised for his contribution to public broadcasting. Tribute was paid to the way in which Tony connects with people all over the country and all over the world. It was a lovely evening, as I caught up both with listeners and employees, both groups of which are extremely dedicated and passionate about what we do.

I had to then quickly rush home and get changed out of my “work clothes”, in time to meet Kate to have dinner at Snakebean. It wasn’t so much the need to change out of a suit for Snakebean, it’s what came later that made me think a suit wasn’t quite the right clothing. But back to Snakebean. It’s such a great little restaurant/cafe. The food is always excellent. The service is always fast and it’s nice and cheap.

I chose it tonight because Kate’s son Tom is in a band which played tonight at nearby Spectrum. The band is called “Combat Wombat”, and they do hip-hop in a uniquely Australian idiom.

I watched them play closely tonight, and it was fascinating to see how four quite different performers come together so easily. I also love their passion, as they sing about the environment and politics and all that kinda lefty hip-hop stuff.

Kate and I were, of course, the oldest people in the room. And while most people clearly got that we were “mum and friend”, one bloke asked us quite naively if we had come to the wrong place.

So, a work function, a great little Asian restaurant, and some hip-hop. That was my Friday in Three Acts.