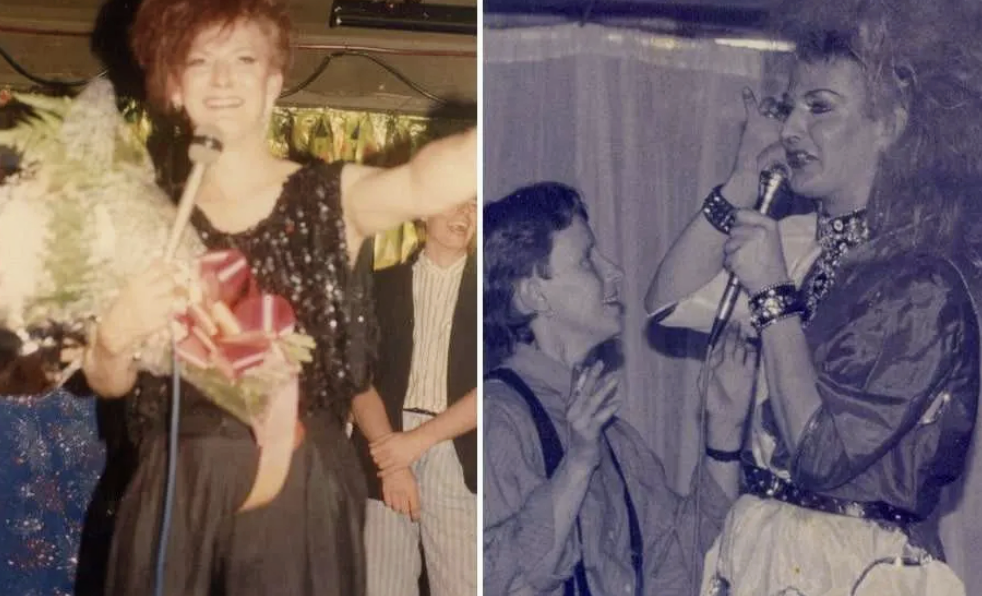 I noticed there was a bloke with a “Hall & Oates” haircut as I looked around the room at “The Sportsman’s Hotel” in Brisbane last night. Do you remember THAT 80s look? A perm on the top, a mullet at the back, and a matching beard. There were lots of other young people wearing 80s looks and fashion too. The current generation has obviously been going through their parent’s/grandparent’s old clothes, and looking at their old photographs for inspiration.

And then I looked up and saw a photograph of Toye de Wilde. Back in the 80s and living in Brisbane, I fondly remember Toye from her days doing shows at The Hacienda, the legendary gay bar on Brunswick Street. She was a huge figure on the LGBTQIA+ scene in Brisbane. A few years later, she ran for state parliament on a gay rights platform.

It was then I started thinking about other drag performers from those days, including Freda Mae West whose apparent inability to lip-sync was a memorable highlight of the Sunday Session at The Alliance Hotel, another Brisbane gay bar from the 80s.

It was a wonderful time in my life. I was about twenty years old, living away from home for the first time, being in a city not a country town, attending university in Brisbane, and getting to really experience my life as a “gay man”.

My memories of those days are vivid. I smiled recently as Kate Bush topped the charts with “Running Up That Hill”, as being on the dance floor of a Brisbane nightclub and dancing to that song is one of my strongest memories of that time. “Boom Boom Boom (Let’s Go Back To My Room)” and “Male Stripper” was the soundtrack of the time. My friend Cathy and I both vividly remember going to the “alternative night” at The Hacienda, “Short Circuit” and, in the midst of Siouxsie & The Banshees, Sigue Sigue Sputnik, The Cure, The Clash, and other “alternative music”, really getting down on the dance floor to “Wham Rap”. We still laugh about it now as a “bonding experience”.

I remember $3 beers, midnight closing (and then re-opening once the police had gone through and collected their money), the Bjelke-Peterson government, going to The Beat nightclub on a Sunday night to “make the weekend last longer”, and going to The Terminus. It’s no longer there, but The Terminus was my favourite Brisbane gay bar, maybe because it was the first one I attended (aged 15!!!) and in particular, I loved the shows put on by Destiny.

I don’t remember much of the exact details, but I remember Destiny as a wonderful host. I remember being there for her final show before she headed off for a new life in Cairns. It was an emotional night.

The friend who I shared a house with back then, Heather and I named our cat, Destiny. In fact, Destiny the cat had three names, Destiny Delores de Wilde, named after two other drag performers in Brisbane at the time.

Destiny the cat is presumably long-gone, but as I looked at the photographs, I wondered “Where’s Destiny?”, the trans woman and drag performer. “Why isn’t there a photograph of Destiny the performer on the wall?”, I thought to myself.

Destiny the performer later ended up at a wildlife farm in Cairns, doing crocodile shows. I remember reading this at the time, and it was later reported in the newspaper Q-News.

Destiny worked for many years in drag shows in Fortitude Valley including for five years at Neil McLucas’s Terminus Nightclub.

“The Terminus was a wild old time,” she said.

“It was the punk era and the declining years of the Bjelke-Petersen reign and we partied like there was no tomorrow.

“Then AIDS came along, and for a while it seemed like there would be no tomorrow. We were just lucky to have venues like the Terminus where we outcasts at the time could form our own families and communities.

But where is Destiny now? Apparently, she is the Editor of Q-News. And why doesn’t The Sportsman’s Hotel have a photograph of the much-loved Destiny on their wall?