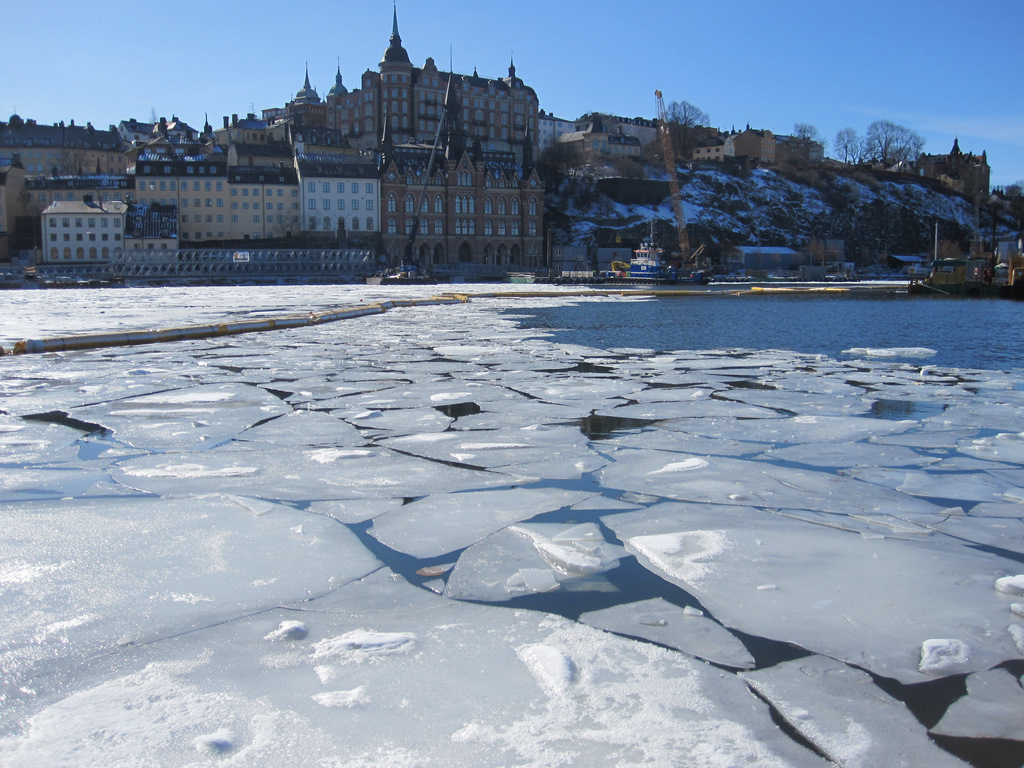 It’s late in the afternoon, it’s four degrees and it’s sunny. In fact, you could almost say it was warm. The weather is in stark contast to yesterday when it snowed for most of the day. By late afternoon, the snow was no longer looking as exotic as it once did to a lad from downunder.

So I retired to my tiny room in Hotel Micro (the one without windows) for a few hours of watching Swedish television. Although definitely budget accommodation, Hotel Micro has very clean shared bathrooms and a killer internet connection. I guess it helps that most of the other people staying here are quite old, so perhaps less likely to be using the wifi. After a few hours though I was bored, and thinking a little bit of inclement weather wasn’t going to stop me enjoying my holiday.

So about ten o’clock last night I went out for a walk. There was an almost an eerie silence around as the streets were all but empty. Most of Stockholm had retreated indoors. It was Sunday night, after all. By ten o’clock, however, the snow had stopped falling. There was, however, a thin layer of snow on the ground and on cars. There was “snow graffiiti” all over the place, including my favourite I spotted in Gamla Stan where someone had written “little dick” on the back windscreen of a BMW. As I stopped to take a photograph a bloke came out of a nearby restaurant presumably to apologise. He quickly recognised what I was doing and we shared a great laugh.

Stockholm really brightens up at night when there is snow on the ground. In the same way that in summer the long days help make the city bright, at this time of the year the snow seems to do something similar.When I woke this morning there was still snow on the ground, though some had disappeared with the early morning sun. And what a day it was for the sun, as people in Stockholm came out to worship the sun. Everywhere I went today I found individuals or groups standing around with their eyes closed, and with their necks crooked so their faces were completely facing the sun. For a moment I thought I’d be transported back in time to observer some kind of ancient “sun worshipping culture”. I guess after three months of long, dark, cold nights I’d be the same.

Once again today I did my two favourite walks. First around the streets of Sodermalm. I swear if I lived in Stockholm this would be where I’d live. And second, the walk to and from the Djurgardsbrunn, one of the world’s most beautiful walks I think. It’s maybe four or five kilometres (I’m not sure, I’m not good with distance) as a round trip. It’s a beautiful, peaceful walk, and not to crowded either at this time of year. I had a coffee and bun for afternoon tea at the rowing club. And that’s where I took my jacket off briefly and let my skin get as much Vitamin D as I possibly could in a reasonably short period of time.

I’m back in my room for a moment for a freshen up ahead of tonight’s concert I’m going to see at China Teatern. The show is a benefit for cystic fibrosis and features Björn Skifs (he sang the original “Hooked On A Feeling”), Swedish Eurovision winner, Charlotte Perrelli, and some of my personal favourites: Magnus Carlsson and Alcazar amongst others.