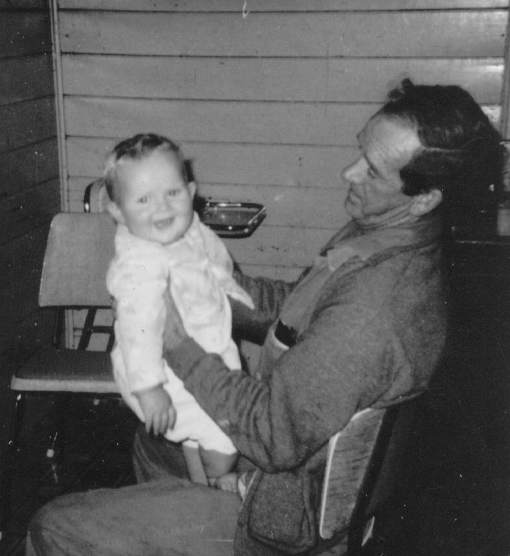 As I looked at the photograph, I suddenly realised how close I am now to being the age my dad was in the photograph. He was born in September 1917, so he would have been about forty-nine years old at the time.

I still have a couple of years before I catch up with him, but it was still interesting to look closely at the photograph and think about stuff. He still had a fair bit of hair, whereas I pretty much lost most of mine about ten years ago. Is that a pen in his top pocket? Yeah, I think so, as I always remember my dad having a pen and often his glasses case in his top pocket. He’s not wearing glasses. Are they jeans he’s wearing? What must it have been like to have been close to fifty years old and suddenly find yourself with a young child to raise?

Researching my own family history is something which continues to fascinate me. There are so many amazing stories within a family, especially mine. You learn so much more about the motivations of the people who you’ve grown up with, when you look into their history. “Ah so that’s why so and so did that?”, I’ll often conclude.

After a bit of a break, I’m back writing and researching at the moment. I’ve recently had some interesting correspondence, and there’s nothing like a bit of feedback to make you go back and look at what you’ve written, and realise it’s time for a re-write, and time to more accurately reference and record the research you’ve done.

I’ve also begun research on some ancestors I haven’t previously taken much of an interest in. At the beginning it can be a slow, painful process, especially when your ancestors weren’t all that famous, often couldn’t read and write, and so the “public record” about them is often a little thin. Through this blog and through the research I’m doing now, I’m hoping it won’t be so difficult for people in the future. Although it’s pretty unlikely I’ll be like my dad and finding myself with a young child to raise over the next few years, I’m hoping a little of me will live on in the research I’m doing now.

These are the areas of research I’m interested in.