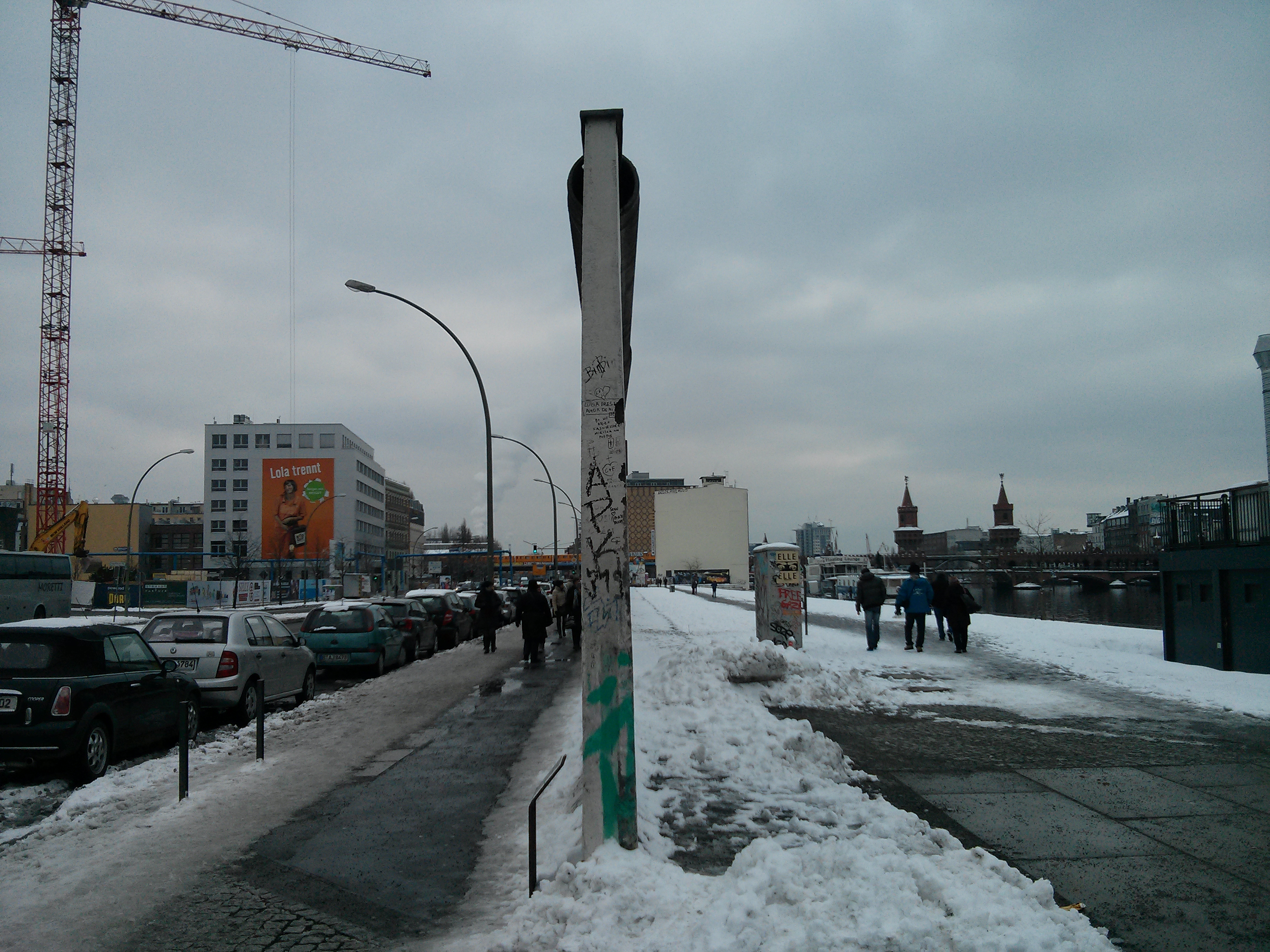 The first time I visited Berlin was in 1983. At that time, Berlin was a city divided into East & West by “Die Mauer” (“The Wall”). Sixteen years later (on my birthday), the Berlin Wall came down, and Germany was re-united. Several months after the wall was all but demolished, a group of artists came together to paint messages of peace and freedom on the wall, and to transform the concrete structure into an open air art gallery, The East Side Gallery.

I’m not exactly sure why I didn’t visit the gallery the last time I visited Berlin in 2008. But I’m glad I discovered the East Side Gallery, and glad that Sue are I were able to spend an hour or so visiting it. Within that idea of peace and freedom, some of the art work is very good. Other works, we both agreed, lacked both artistic as well as thematic merit. “Working with concrete is not exactly the best canvas for great art”, I observed at one point.

Of all the works, perhaps the one which is the most dramatic (and well executed) is the kiss between Brezhnev and Honecker, which Wikipedia describes in these terms…

Mein Gott, hilf mir, diese tödliche Liebe zu überleben), sometimes referred to as the Fraternal Kiss (German: Bruderkuß), is a graffiti painting on the Berlin wall by Dmitri Vrubel, one of the best known of the Berlin wall graffiti paintings. Created in 1990, the painting depicts Leonid Brezhnev and Erich Honecker in a fraternal embrace, reproducing a photograph that captured the moment in 1979 during the 30th anniversary celebration of the foundation of the German Democratic Republic.

The thing which surprised Sue most (and me also in hindsight) is how thing and seemingly fragile the actual wall was. I’m sure it was thicker and more secure in some places compared with others, but the section we saw (and which has been transformed into the open air art gallery) was barely more than a hands-width.

As serious as this all was, I couldn’t resist a bit of “Cold War Kitsch” and had my photograph taken in one of those “cut outs” of JFK declaring “Ich bin ein Berliner”. An important and serious moment in world history, it’s famously been referred to in The Simpsons, as Mayor Quimby declares, “Ich bin ein Springfielder”, and now in 2013, with some clown from Australia joining in. Shame O’Brien, shame.

From there it was a visit to the five-story Humana second hand clothing store. There’s quite a few of them around Berlin. Actually there’s quite a few second hand stores more generally. According to everything I’ve read, the Humana chain sells quality second hand clothing, and then uses the money to support development projects in different parts of the world. Our desire to visit was less about that and more about the need to find some new shoes for Sue, whose decision to bring some oldish hiking shoes has resulted in sore feet and blisters. We were not disappointed.

Other highlights from the day included a late afternoon visit for a glass of wine and some anti-pasto at the Raddison Blu Berlin. Located inside in the bar is what’s described as the world’s largest cylindrical aquarium. The visit was the recommendation of a radio colleague from England who described staying in the hotel and watching a guy in scuba-gear outside his bedroom window cleaning it. He also recommended visiting the bar and contemplating for just a moment what would happen if it collapsed. “Would we be crushed or drowned if it collapsed”, I asked Sue over a glass of wine. “Shards of glass would probably impale us”, she concluded.

And from there, it was home for a night of reading, hanging out, and generally relaxing, ahead of tomorrow’s visit to Copenhagen.