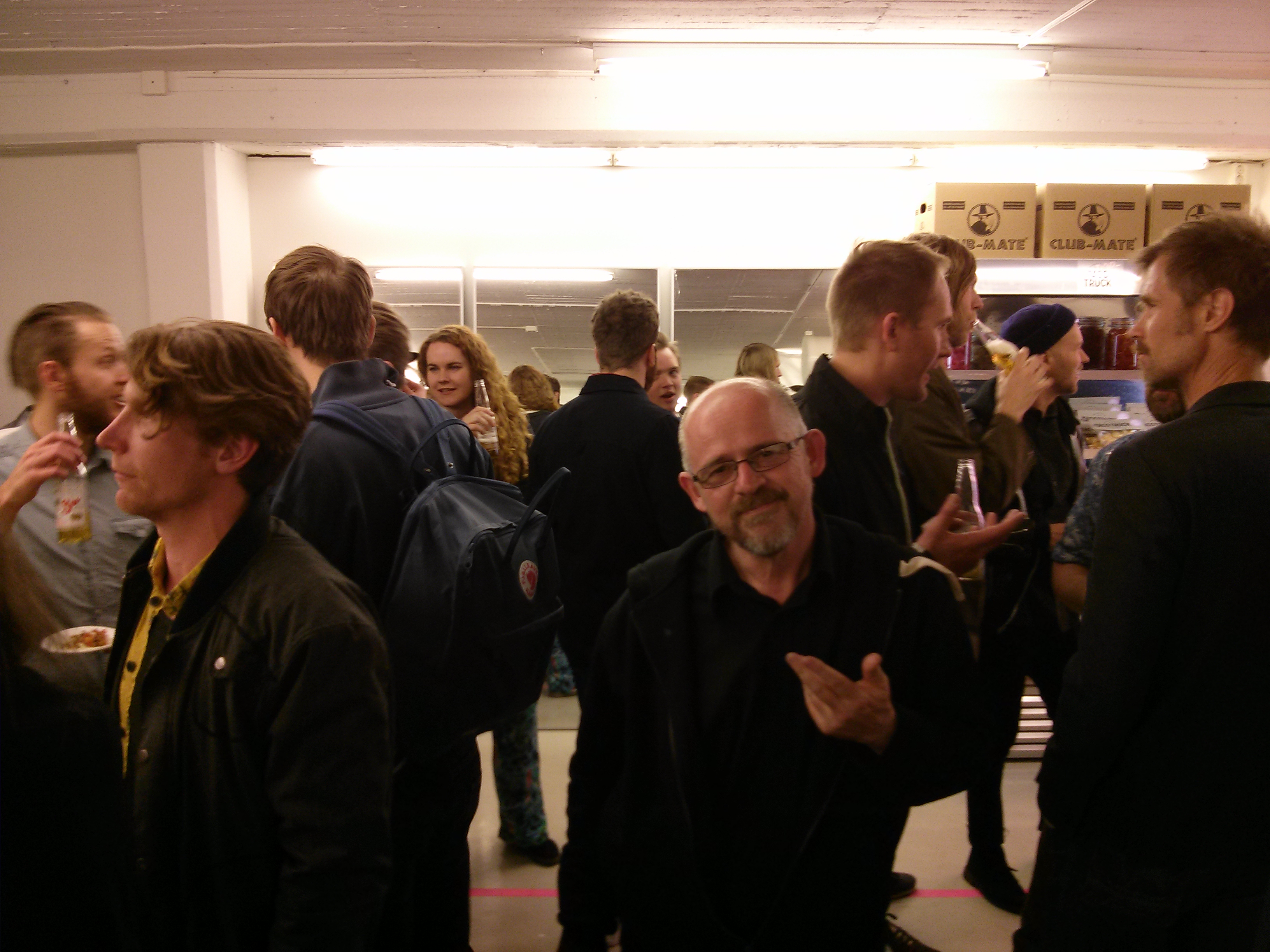 “You’ve lost a lot of weight. You look fantastic” is the most common phrase I’ve heard this year, usually followed shortly afterwards by a secondary question, almost whispered, “You’re okay, aren’t you?”. “Yes I’m OK”, I’ve told lots of people this year, as they’ve queried my weight loss. Although not as much as I’d hoped, I’ve slimmed down a bit this year thanks to the combination of “low levels of exercise, sensible eating, and a reduced level of alcohol consumption”.

Magic eh? I haven’t changed my lifestyle in any kind of radical way, I’ve just been a little more “sensible”. The result is I’m now down to about 75-78kg which is still overweight for someone my height, but getting much closer to what I should be. Hey, I remember being over 100kg only a few years ago. So it’s definitely a year for celebration in that part of my life. I guess part of the reason I’ve also lost weight this year was that I took a few months off work to travel to Sweden, Iceland, Germany, The Netherlands, Denmark and Turkey.

This was my fourth trip to Stockholm in five years. Every visit seems to get a little longer. I’ve concluded I’ve “lived” in Stockholm for about six months over the last five years. Although I still haven’t met my goal of living in Stockholm for an extended period, I feel like I’m getting there incrementally.

Having experienced a bit of winter, two summers, and two springs, I’ve concluded May is probably the best month of the year in Stockholm. There’s a wonderful optimism about the place, thanks to the warmer weather.

Although I love snow and ice, the period between the winter months and the warmer months (when everyone leaves for a few weeks), is definitely a very liveable period there. While there I developed a lovely routine, as I was able to stay in apartments (thanks to airbnb). It was a really relaxing period for me. I loved it very much, as you’ll see if you read some of my blogposts from this time. I’m toying with the idea of heading to Stockholm Pride in 2014, and maybe an adventure further up north.

Other highlights included going to the Anzac Day Dawn Service in Turkey and travelling to Iceland. Iceland was amazing. Really amazing. As well as walking on a glacier, there was a moment when I stood on a beach where it snowed.

As I wrote at the time…

There was a point half way through the day when I couldn’t stop giggling. Along with the rest of the tour group, I was standing on a beach on the south east coast of Iceland. We were all very cold and it was snowing. The on-line brochure and accompanying research I’d done before-hand suggested clear blue skies as a backdrop to viewing a series of large basalt structures in the ocean. As we stood there, peering out through the snow, and desperately trying not to fall over (due to the wind gusts), I kept thinking how wonderfully ridiculous it all was.

This year I also went to my first ABBA Day in Europe and to the Official Opening of the ABBA Museum in Stockholm, both of which were memorable moments, and which I wrote about in the ABBA Magazine and spoke about on ABC Radio on several occasions.

A few months later I travelled to South Africa, where I was invited to speak at a radio conference at the Wits University. It was a really interesting time to be there, as it was the time when the health of Nelson Mandela really plumetted. Indeed, there was a general belief in South Africa at the time he had already died and was being kept alive artificially. In many ways, it was a life changing experience, as I got to meet and chat with locals there, and gain an insight into their lives which went beyond what I read about and watch through the prism of journalists. As I blogged at the time…

“We still live with apartheid”, the bloke in the bar told me. He told me of the sadness he felt that the man who parked his car for him tonight was old enough to be his father. “I’m doing fine because I went to university, but these people are still recovering financially from all of those years.”, he said. When I asked him how long it would be before the years of inequality would be left behind he told me he didn’t know, though conceding it would be decades, not years. Both he and my driver expressed concern about what might occur in South Africa following the death of Nelson Mandela. My driver, in particular, told me he thought there would be some blood-shed. His argument was Mandela was the uniting force which held the nation together amidst long-running arguments. In stark contrast, I’ve also been advised these kind of arguments are somewhat alarmist, since Mandela hasn’t been a major public force in South Africa for at least a decade. When I asked the bloke in the bar tonight why he thought Mandela was being kept alive, he was at first taken aback. “How do you know he’s dead?”, he asked me with a wry smile. When I told him that’s what all of the papers are now saying, he told me no one is really willing to say that publicly here. Both he and my driver told me they thought the key issue was an argument amongst Mandela’s children and grandchildren over both property (there’s a photograph in particular that’s worth a lot of money, apparently) and about where Mandela should be buried. There’s a complicated story about how one of Mandela’s grandchildren has exhumed the bodies of three of Mandela’s children and moved them to his own property. There’s a legal battle underway about this, and I guess in the background to there’s an underlying concern about who will “own” Mandela’s body when he dies.

Did I mention I also met a really nice bloke there? :)

My friend Sue came along with me for two or three weeks of my trip to Europe and remarkably we didn’t kill each other. I say that with humour, as there’s always the potential for conflict when friends and family travel together. We also travelled together to Tasmania, and we’re planning a trip to China together in May. The fact we didn’t want to kill each other means we obviously have a friendship that’s matured and firmly cemented itself over the thirty-something years we’ve known each.

Other friendships haven’t gone so well, and later in the year, a friend and I had a “discussion” about how our friendship had changed/disintegrated over the last year or so. That happens, I guess, over time. I guess part of the problem is that we’re both a little “high maintenance” and maybe a little bit “on the spectrum” in many ways. Hopefully 2014 will be better.

As part of my travel, I also got to know Robert and Sandra who live in Stockholm a little better. We’ve been internet buddies for about three or four years now. As I spent a lengthier period of time in Stockholm this year I got to know them better and concluded pretty quickly, “I really, really like these guys”. Long distance friendships aren’t easy for me. I’m not one for chit-chat. I’m not very good on the phone and in email. And I really don’t like (or use) Facebook, but hopefully one day we’ll be living in the same city. Maybe Stockholm? Maybe Sydney? Actually, they’ll be in Sydney in February, which I’m looking forward to.

For the first time in a number of years I haven’t gone home for Christmas. This year I just didn’t feel like it. Also, I figured that since I took three months off work this year, it was my time to stay in Sydney and look after things at work. Thankfully, it hasn’t been too hectic, as the weather has remained fairly mild, and all was good, as I’d done a fair bit of preparation for the holiday period. And so as I approach 2014, there’s no sense of “end of year panic” for me, thankfully. It’s been a difficult year for my family in Lismore in many ways I won’t go into here. But on Christmas Day, as we did a Skype call together, things seemed to be a little more positive. Michelle is heading off on her first overseas holiday (aged 40) to Thailand. Karren is pregnant with her second child. Pat has now officially retired, and Nancy is in much better spirits after an operation to solve several years of pain. I’m desperately hoping things will be better in 2014.

For about a month this year, I got excited about the idea of doing some online dating. I’ve tried this before, concluding a lot of the gay dating sites are about sex hookups or are full of people with unrealistic expectations. I once did an internet date where I felt I was being “interviewed” for the position of boyfriend. Yeah, I know they work for a lot of people, but I haven’t had much success previously. So I tried rsvp. Once again, I’ve come to the conclusion “it’s not them, it’s me”, as I found myself pretty underwhelmed. I’m not very good at small chat, and that’s what I think you need to be able to start off with for internet dating. I’m concluding that, if I’m to meet someone, it’ll probably be through someone I know already, or maybe someone through work. Though I’m always reminded of a former manager who told me, “You don’t get your milk where you get your bread…” Think about it. Not that I’m desperate to meet someone.

My friend Michaela (with whom my friendship has deepened this year) and I have chatted about this a few times this year. We’re both in our 40s, both single. We’ve both noticed a lot of our friends who’ve recently partnered have begun to patronise us with statements about how we “Shouldn’t worry as we’ll soon meet someone”. Although I know what they’re saying – it gets increasingly harder to meet someone as you get older – I’ve concluded being in a relationship isn’t the be all and end all of my life. I’ve also reached the point where I’ve concluded I won’t have kids, and there’s a possibility I won’t have a relationship. But I’ve also concluded there are lots of other ways of living the second half of your life that don’t involve either. But hey, if Fred Nile can meet someone at eighty, there’s hope for the rest of us. :)

As I read back on these “Year In Review” posts over the last decade or so, I note there’s a theme. Each year it seems I write something about how terrible my life is (in some ways), and how fantastic it is (in other ways). The truth is – I have a truly blessed life. Although there are negative things which I reflect on (probably) far too much, there’s so much that’s good in my life. As I approach 2014, I think it’s time for me (finally) to stop reflecting on the negative and start thinking more about the positive, and to definitely avoid that 48 Crash that Suzi Quatro once sang about.

I turned 48 this year, and as Suzi Quatro reminds all of us celebrating their 48th birthday this year… crash crash, forty-eight crash.