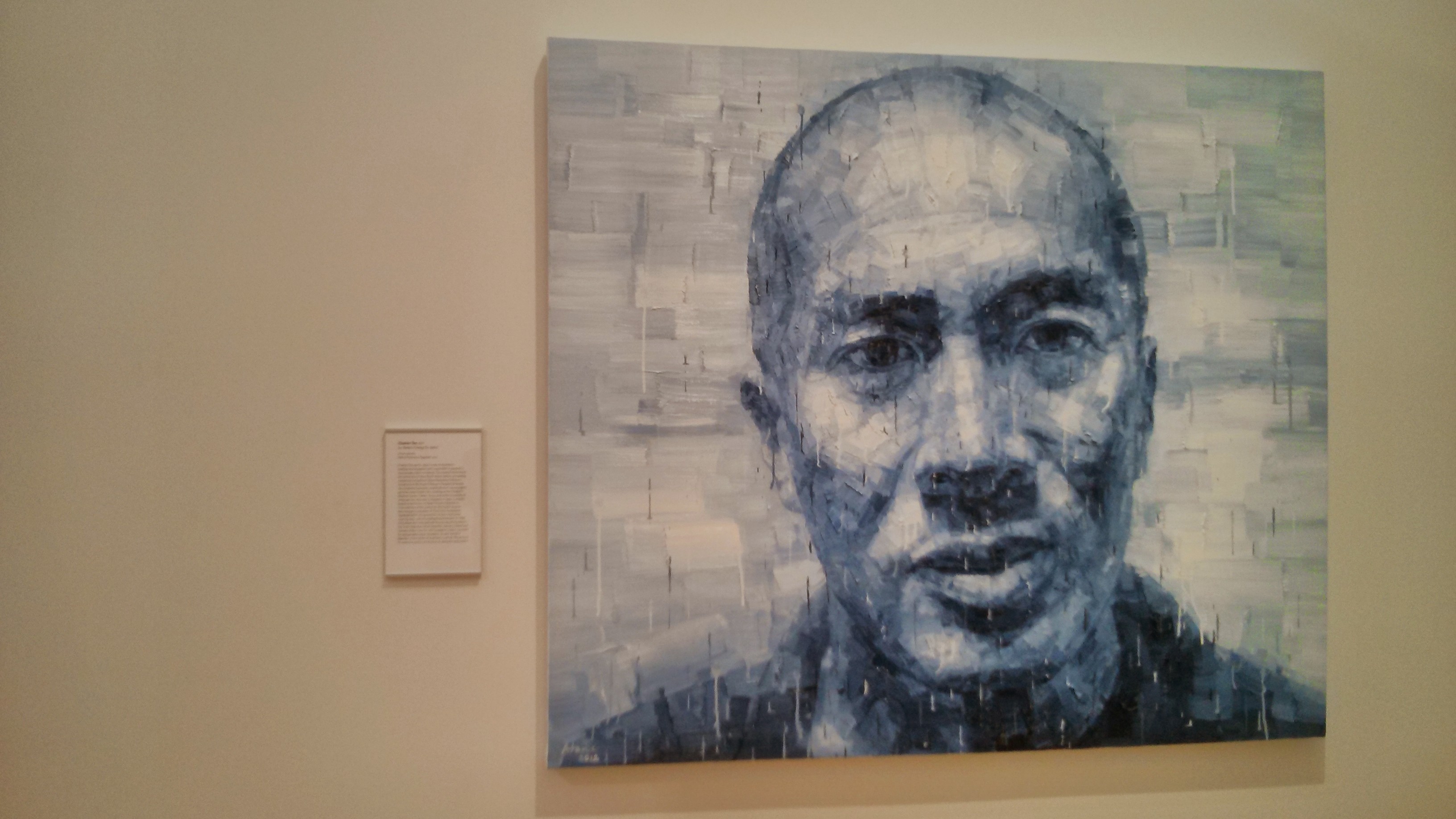 One of the really great things about the National Portrait Gallery in Canberra is that you already “know” so many of the people. And as you already come to the works with feelings about the individuals, I think you experience a greater connection with the works than you might otherwise experience walking around an art gallery. There again, because you know the people, there’s a chance you might not actually experience the art work as the artist intended, because you have all of the other knowledge clouding your judgement.

Although I’ve never met Deborah Mailman, I feel as though I “know” her from her work. Thus I was drawn to the wonderful painting of her by Evert Ploegg. Many years ago I interviewed Chad Morgan, and so I was also drawn to the painting of him by Peter Hudson, and in particular, his roughly manly hands. I also once interviewed Faith Bandler, and so was drawn to the beautiful bronze sculpture by Julie Edgar. Today, the paiting of Alex Dimitriades also caught my attention, for similar reasons to the Deborah Mailman painintg: I feel I already know them.

But these In the case of one of the works I do know one of the subjects very well. I’ve known Joan Croll for about twenty years now, as she’s the mother of my good friend Catherine (Kate).

It’s a really interesting portrait of Joan, based on sketches in the house she and her late husband, Frank, used to own at Hunter’s Hill. I knew it was one of John’s Brack’s early works, though I didn’t know until I saw the notes below that it was John Brack’s first private commission.

Knowing that it was Brack’s first private commission added something to the experience of the art. It was then I wished there was more of that at the gallery. Most of the contemporary works seem to have a beautifully written biography of the portrait subject, but hardly anything about the artists responsible. I would really love if they could include some statements by the artist about why they chose the portrait subject and what they hoped to express through the work. It’s not a major criticism of the gallery, but I think it would really add something to the experience.

Also at the gallery today, there was some kind of hair and fashion thing going on (I didn’t stop to look too deeply), there was a bloke with an ice sculpture of Douglas Mawson (it was a warm day, so I’m not sure how long it will last), and there was a restrospective of Michael Riley.

I went to the opening of the Michael Riley exhibition in Sydney just over 12 months ago, and enjoyed it very much. As I wrote at the time…

The exhibition at The Commercial Gallery features about twenty very beautiful photographs taken by him during the 80s, 90s, and 2000s. They’re all black and white portrait photographs, shot simply and processed reasonably heavily. All of the subjects are Indigenous Australians living and working in Sydney at the time. There’s some beautiful father/daughter, father/son photographs, along with some stunning single person photographs, including one of a bloke called Darryl who is a friend of a friend.

Even though I’ve seen these works previously, I looked at them with a “new eye”. In particular, I was really touched by the photograph of NSW politician, Linda Burney and her baby. In the photograph she’s holding the head of her tiny child with a hand that shows both strength and tenderness. That probably describes Linda quite well, I think.