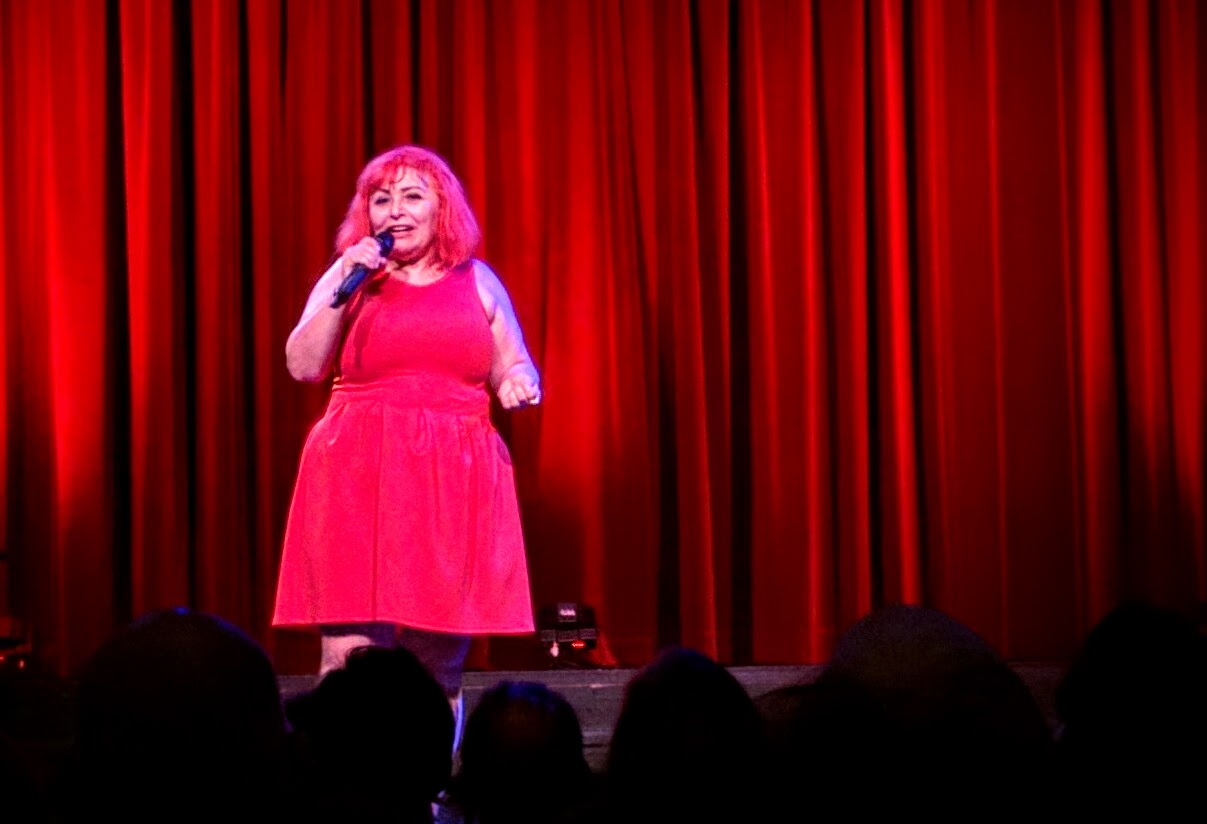 I was a little surprised to see Bob and Blanche in the audience last night at “Giant Dwarf”. Though, I’ve seen them at heaps of theatre events around Sydney, it’s often been at the “top end of town”, whereas “Giant Dwarf” is a little more down-market, and it’s a little more “alternative”.

Last night’s show was by Penny Arcade, the New York-based performance artist with ties to Warhol / The Factory etc back in the 1960s. Now in her 70s, she’s still at the cutting edge, with her critique of modern day life. In particular, she hates the so-called “gentrification” of inner city areas, “turning cities into suburbs”.

Though I knew of her work, I had never seen her perform. And so when a friend said she was getting a group of people together to see the show, I jumped at the chance. And I’m really glad I did. It was, honestly, one of the best shows I’ve seen in a long time. Penny makes you think, and Penny makes you laugh. And her timing, as she interacts with a musical soundtrack, is spot on. Highly recommended.

“The things you said on the TV about Warhol were really amazing”, I said to her as we chatted briefly after last night’s show. I was referring to an interview she did on ABC-TV in the last couple of weeks, in which she said Warhol wasn’t the great counter-culturalist you might expect. In the interview, she went on to say he just wanted to make money, hang out with other rich people, and had problems with his sexuality. Having read The Warhol Diaries all those years ago, I guess it makes sense, it’s just that I’d never heard anyone explain his life in those terms before. She was generous with her time, as she chatted with people after the show, and though she had a minder holding her hand, urging her to move on, she seemed genuinely interested in what I, and others, had to say, and ask her about.

Hawkie? As it happens, the former Prime Minister and the author spent a bit of time afterwards chatting with Penny. As it turns out, the Hawke Centre at the University of South Australia is a supporter of her current tour, and Bob, Blanch and Penny go back a long way, as I discovered earlier today, thanks to Google. I guess I shouldn’t have been surprised. Hawkie was, after all, at Nimbin in 1973 for the Aquarius Festival, and I recall, our local newspaper The Northern Star, made a particular point of Hawkie having been seen skinny dipping in the creek.