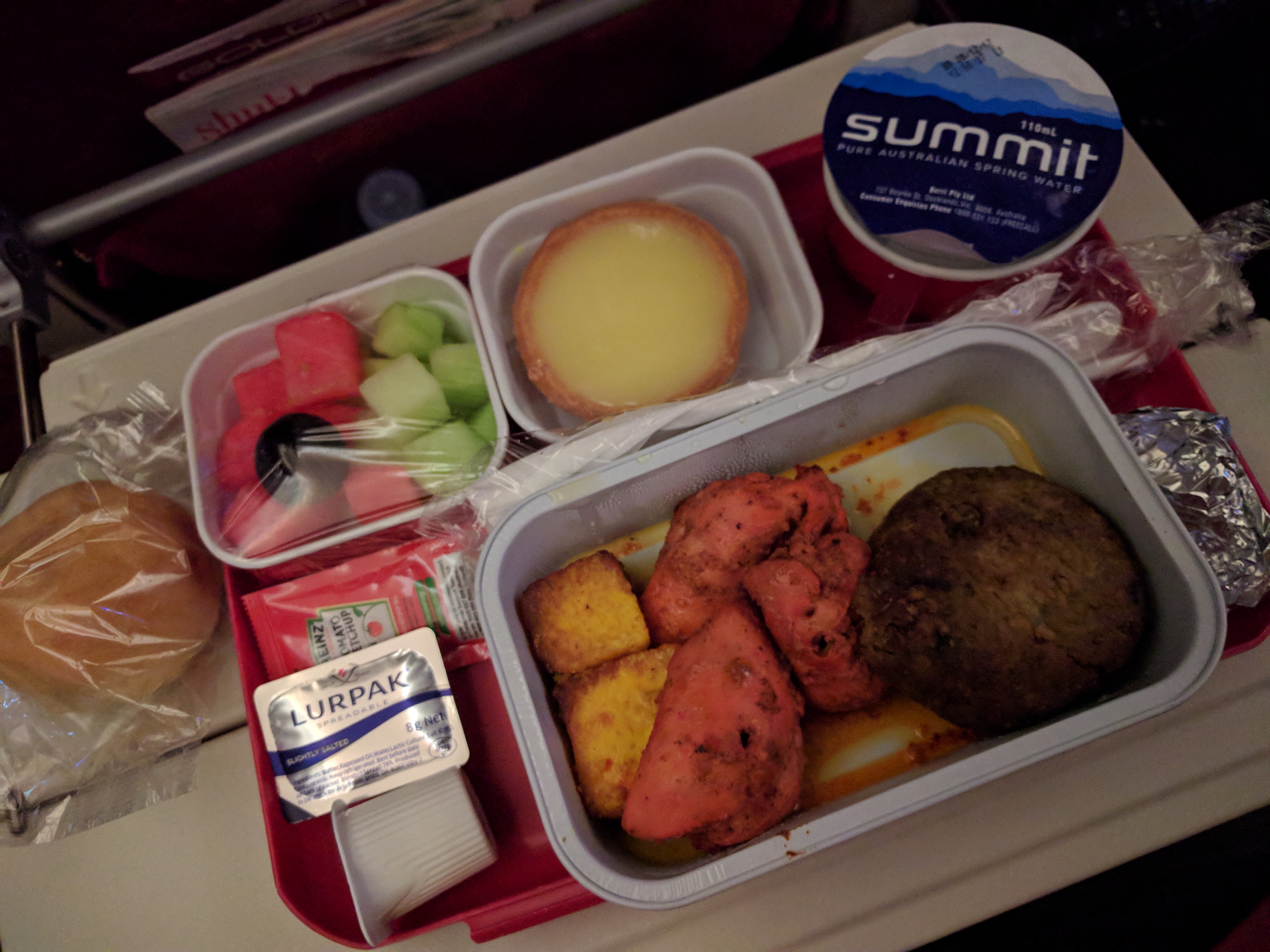 Are We In India Yet?

There’s a terrific episode of “The Simpsons” where the family travels with Apu to India, and where Homer keeps repeating the line “are we in India yet?”.

Chuckling to myself, I kept saying the line over and over in my head, because it now makes sense completely. It’s a long way to India. In the world of airline food, the flight is “two full meals and two snacks” long. Though it was supposed to be almost 13 hours long, we made it in 12.

“Would you like the vegetarian or the non-vegetarian?”, I was asked by the flight attendant on the Air India flight from Sydney to Delhi. Coming from a meat-eating culture, it surprised me. I was half-expecting the standard “beef and rice” or “chicken and rice” that you’re generally offered on international airlines, these days, but of course beef and India don’t mix. I chose meat both times, chicken curry and rice for lunch, and then a chicken tikka dish for dinner. In both cases, the meals were delicious.

When we booked Air India several months ago, we had no idea what to expect. But since the return price to Spain (which included a stop-over in Delhi) was so incredibly cheap ($990 return), I would have been happy sitting on the wing. As I’ve researched the airline over the last few months, I’ve been pleasantly surprised at what I’ve read. And I’m pleasantly surprised by the flight. It’s nothing flash, but it’s also not terrible. The flight was good, with friendly service, comfortable seats, a reasonable entertainment system, and best of all, there were a few free seats. In fact when we took off, I had three seats to myself. Eventually, someone in a neighbouring seat came and joined me in one of the other seats. But even so, I was able to stretch out and relax.

I slept for a bit. I listened to some music, and to a Spanish language course, and feel reasonably confident that I can order coffee, beer, white wine, red wine, and ask for the bill. That’s all I’m gonna need, right?

So, am I in India yet? No, not yet. Not really. As part of the flight deal, there’s an overnight stay at the Holiday Inn Express, located within the airport, the other side of security. The reviews online range from “worst hotel ever” to “great for a stopover”. Looking at the profiles and demographics who described it was the “worst hotel ever” were probably the same people in Shirley Valentine on the Greek island who insisted on “British food”. My room is clean, has a view of international check-in, and the internet’s pretty good. They say they have a “bar” which I went to earlier, but it’s actually just the breakfast room. I giggled slightly, recognising the look of disappointment on the faces of the people who came in expecting something a little more sophisticated. Anyway, I’m back in my room, and I’m looking forward to a good night’s sleep ahead of tomorrow’s flight to Madrid.