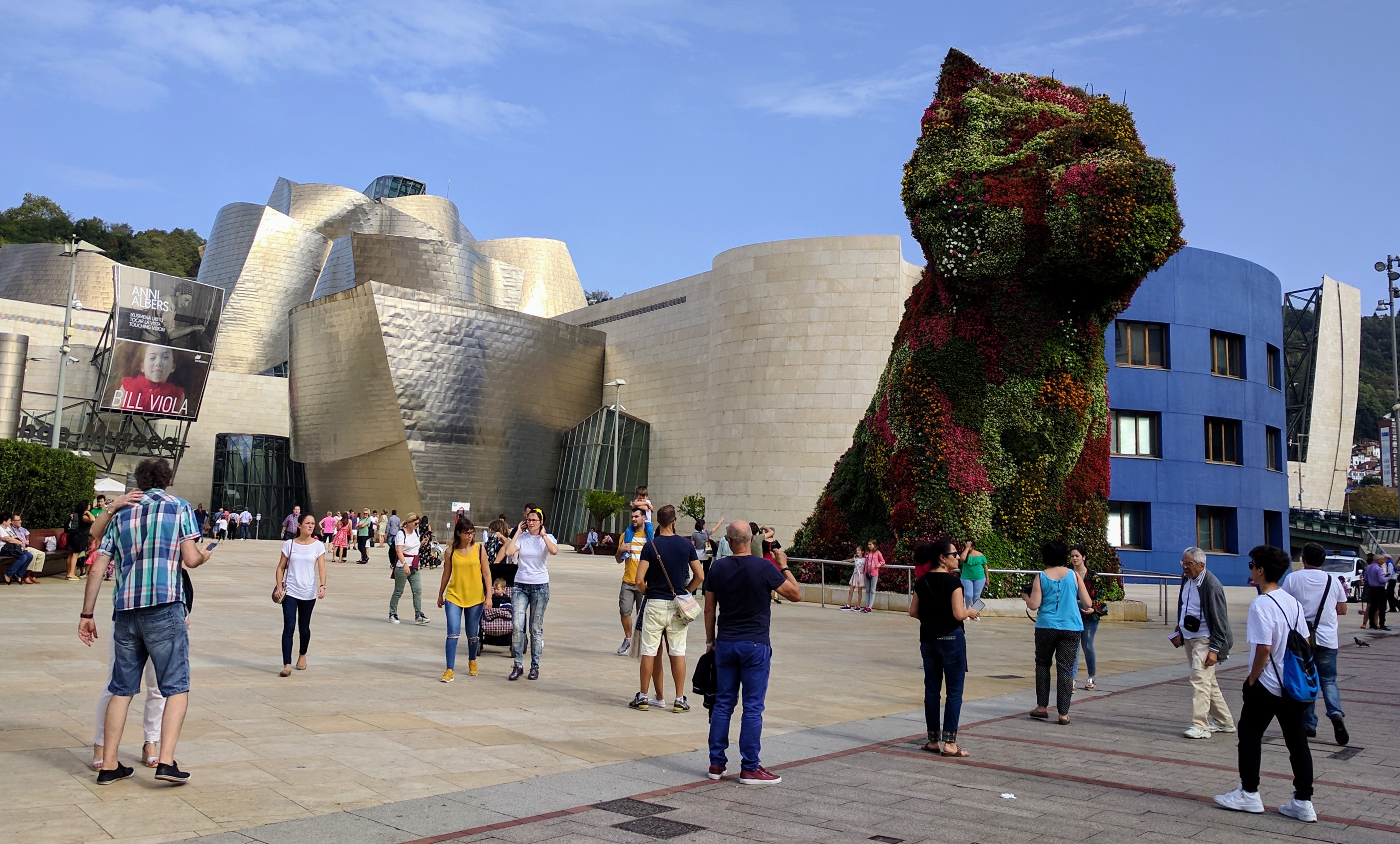 After a couple of days visiting San Sebastian and Bilbao, we’re on the train headed back to Madrid. In common with the trip from Barcelona to San Sebastian, the trip takes about five hours, and once again, we’re passing through the vast countryside of Spain.

At first, the landscape from Barcelona to San Sebastian was largely flat. In some respects it resembled those parts of Western NSW (around Broken Hill), across the border into South Australia. The closer we got to San Sebastian, the more mountainous it became. Slowly, as we approached San Sebastian, it began to feel less like “Northern Spain” and more like “Southern France”. The border between the two countries is only a short distance away. The train, which had reached high speeds, slowed dramatically, as we travelled through gorgeous small mountain townships until, eventually, when approaching San Sebastian, it became snail like.

My first impression of San Sebastian was one of slight disappointment. Though there were some lovely older buildings, and in the distance, a statue of Jesus overlooked the city, there were too many tourists for my liking. And yes, I’m aware of the irony of being a tourist and not liking tourists. Though initially I said it was like the Gold Coast (which Sue chastised me about), it’s most definitely a tourist town with lots of up-market shops.

On Sunday morning, we caught the bus to nearby Bilbao, where we met a lovely man who Sue knew from the University of NSW. He’s from a nearby town (forty-five minutes by car from Bilbao), who had spent six months studying in Sydney, and was now back in his home town, studying, and hoping to start a new job. He was an excellent tour guide and guest for our six hour visit to the city. It was also fun to hear his reflections on living in Australia including the initial struggles he had with “university mealtimes” being closer to 6.00pm, compared with the much later times he was more familiar with in Spain.

Bilbao is home to the world famous Guggenheim Museum, designed by Frank Gehry. As we walked around the museum, the audio tour explained the building was designed to be “as interesting as the artworks themselves”. Outside there were two major works by Jeff Koons – “Puppy” and “Tulips” – which were wonderful, and which attracted a lot of attention. Inside, there were some terrific works by De Kooning and Basquiat, as well as a rather timesome exhibit of folk-art. Yawn. Had we more time to wander around, I’m sure there would have been more to see.

Wandering around the city, we took in various historical sights, had an awesome lunch at a place which translate as “Mammas”, and had some gelato at a local place, known for experimentation eg: squid-in and cod flavoured. An awesome day. I really liked Bilbao. It had a “university town” feel about the place.

As I was starting to feel the effects of non-stop travelling, I slept for most of the bus trip back to San Sebastian. Last night, while Sue wandered into the old part of San Sebastian for dinner, I stayed in my room, napped, read a few things, and just “relaxed”. My feet were also a little sore, as we’re generally clocking up fifteen to twenty-thousand steps daily.

One of the other disconcerting things about visiting Spain at the time of the year is waking early and discovering it’s still dark. Sunrise is about eight in the morning.

And so after waking and having breakfast, this morning, we put our bags in lockers at the bus station, and caught the hop-on-hop-off bus, taking us eventually to Mount Urgull. At the top of a fairly steep “mini mountain” (I needed to take a rest halfway up), there’s a statue of Jesus (yes, another one), overlooking the city. There isn’t however, a church in sight. At the top of the mountain, Jesus overlooks spectacular views of the city, surrounded by eighteenth century cannons.

Tomorrow, we’ll spend the day travelling to and from Toledo. For me, that’s the end of this wonderful trip. I’m catching a plane tomorrow night, with an overnight stay in Delhi, before arriving back in Sydney later in the week.