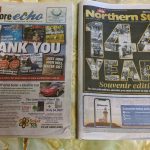 Conscious that I sometimes share material on other platforms that never makes “the cut” here on my blog, here’s a few tweets, posts, and observations that still seem relevant from June. Lots of ephemera, but hopefully still quite entertaining.

June 10 : I could be wrong but… Why does it seem Big Brother is always made up of divisive CALD figures who get voted out early, while under the radar white boys sail through to the end? I could be wrong. No evidence.

June 25 : There’s been some commentary about the costs of running the ABC (and SBS’s) transmitters. Here’s the background to the government sell-off in 1998. https://aph.gov.au/Parliamentary_Business/Bills_Legislation/bd/bd9899/99bd062

June 25 : One of my favourite things of working from home today. A collegue and I on a video conference both revealed we have a blanket over our knees! “It would look pretty bad at work, but it’s great here”, she said.