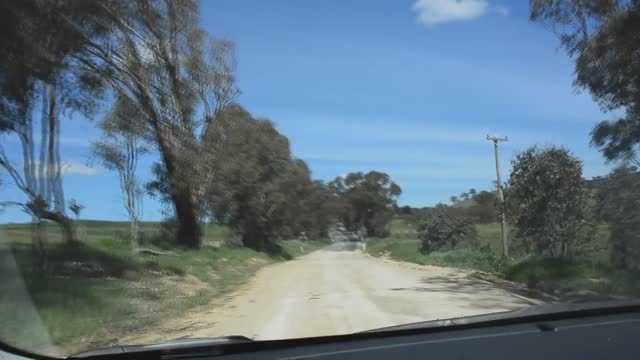 “I remember visiting Ophir in about the year 2000”, I told Sue as we made our way along the road. In modern times, Ophir was the place where gold was first discovered in Australia, and the site of the first gold field. As I recalled, small flecks of gold from Ophir was used in the medals for the Sydney Olympics.

“I doubt the mine is still open now”, I said to Sue. The guy who ran it was a fair age at the time. I haven’t been able to find any recent references to the mine, so I’d be keen if anyone reading this post has any knowledge of what happened between now and my visit there in 2000.

The road to Ophir was a long and dusty one. It’s maybe twenty kilometres from when you first see the “Welcome To Ophir” sign until you arrive at the beautiful camping ground down by the creek where miners would have once panned for gold. Along the way, you can visit a couple of other nice creek-beds, as well as an historic cemetery.

From there we headed to Millthorpe, another “historic town” in the area. Millthorpe had a weekend vibe about it, and we noticed some of the shops declared their opening hours were only Friday, Saturday and Sunday. Still, it was nice to walk around and to look in the shop windows.

We also visited the recreation area at Lake Canobolas and the Nashdale Lanes winery.

Though there are lots of wineries in the area, we chose Nashdale because the son of a former school-mate is now working there on the cellar door. “Oh my goodness he looks like Amanda”, I said to Sue, noting the area around his eyes. We assured Amanda via Messenger he was very good at his job, having moved to the area only fairly recently, after previously managing a wine bar in Brisbane.

Due to social distancing there were limits on the number of people who could attend tastings. We arrived at exactly the right time. Along with us there were a couple of families in school holidays (the kids played outside while the parents did the tastings), as well as a couple of couples.

The wines were good too. We tasted half a dozen and bought a few bottles to take with us.