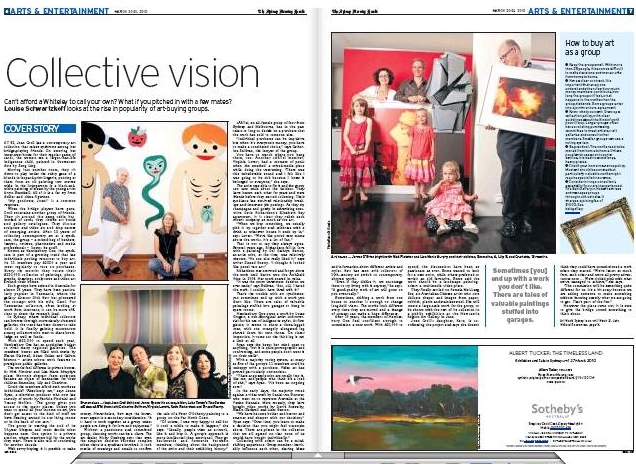 Hello it’s Sunday Night/Monday Morning. I’ve just been writing some notes for the art group of which I am part.

It’s been a really terrific forty-eight hours since my last post.

I spent most of Saturday hanging out, although I did pay a visit to the Surry Hills Markets. I was hoping to find some new herbs for my garden – it’s amazing how well herbs grow when you don’t have your boyfriend’s friends ashing their cigarettes in them all the time – but unfortunately there was nothing to be found.

And then in the afternoon I paid a visit to Kegworth Primary School. Isn’t that a great name for a school? Marco is involved in a choir which is about to undertake a major Outback Trip. I went there to record a story about it. It was great fun. A special work about the Australian landscape has been commissioned. When they visit these towns, including Bourke, Coonamble and Brewarrina, they also plan to have special workshops with locals. Turns out Michelle who is the Artisitic Director also knows quite a few people from work.

And then, this evening, as part of the Hawkesbury Group, we paid a visit to the Utopia Art Gallery in Danks Street, Waterloo.

The galley director, Chris Hodges, spoke briefly, about collecting art and discussed the importance of considering the total output of an artist, including visiting their studio and gallery “backrooms”, especially as “bargains are often foud in the backroom”. But access to the “backrooms” is reliant on the curator’s trust. Chris mentioned on a couple of occasions, the idea of buying three smaller pieces, rather than one large one as a cost-effective alternative. He mentioned the book he read many years ago saying if you want to collect art you need a spare $100,000. Yeh, sure!

When it comes to Aboriginal Art, Chris urged us to avoid galleries with the word “dreaming” in their title and said “the best of the best will last and the rest is for the tourist market.”

One of my earliest favourites was a piece by an artist called Elizabeth COATES. Chris noted that she is both “consistent and exploring” in her work. Chris said, she’s in her 40s, and has long history of exhibiting, but has gone in and out of curatorial favour.

Other artists we looked at included:

Makinti NAPANANGKA: Aged in her 80s, but Chris noted she is “always trying new things” which makes her both interesting and collectable. She’s from Kintore, 350km west of Alice Springs, part of the Pintupi language group. According to an article by Ashley Crawford, Contemporary Australian Art: An Odd Creature From Down Under, “Watching Makinti Napanangka work is a remarkable experience. She sits in the middle of the canvas and begins painting her meticulous, meditative lines. With her head no more than twelve inches from the canvas, she painstakingly constructs wave upon wave of line work.”

John R. WALKER: Chris mentioned the consistency of his work, and noted that he is featured in many of the country’s biggest collections. Chris noted Walker was “famous very early and then because unfashionable for a time because of his interest in landscapes”. Chris also noted “there has been some market resistance to his work due to his confrontational figures”, as we saw in a beautiful big “devil” painting.

This led to a brief, general discussion about the conservatism of corporate collectors. In the BHP Collection, he noted, you wouldn’t find a nude, except if it was a Norman Lindsay.

Lorna NAPANANGKA: Chris said he believes she “has found her voice”. According to some biographical information I found on the internet “Lorna Napanangka was born at Papunya in 1961, and as the full daughter of Timmy Payungka Tjapangati, is a second-generation Papunya Tula painter who has been painting in her own right for a relatively short period of time. She and her husband Billy Ward move between the communities at Kintore and Kiwirrkura, spending more time at the latter. Her fine and rhythmic work evokes styles as diverse as the severe Western Desert formalism of Anatjari Tjakamarra, the grid patterns of the Tiwi islands and semi-geometrical Art Deco motifs.”

George TJUNGURRAYI: I think it was George (correct me if I’m wrong), about whom Chris said “for a long time George did some very boring snake drawings”. A bit like Lorna, Chris said, his later work was much more interesting. Born c.1947; Pintupi Tribe, Kiwirrkura, Central Desert, NT

Gloria PETYARRE: Gloria, who was born in 1945, “is one of seven sisters who are all artists, including the well-known Kathleen Petyarre, Nancy Petyarre, Violet Petyarre and Ada Bird. Gloria, like many of the Aboriginal women artists in Utopia, first gained recognition as an artist working with batik. There’s some quite good biographical information http://www.dacou.com.au/

We also had a brief discussion, informally, about collecting sculpture, and there was a lot of interest in the Marea Gazzard works on display.

We have a piece in mind and will make a final decision later this week.