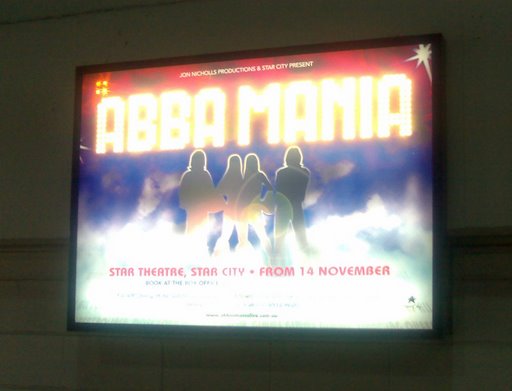 I was sitting at Star City Casino the other night, and for just a brief moment I wondered if I should have been somewhere else. Normally on a Wednesday night I’d join a group of friends at a pub in Lewisham for a mid-week debrief about our lives over a few beers.

But on Wednesday night this week, another friend (“C”) and I had decided to go to see ABBAMANIA, a brand new musical tribute. And for just a brief moment, I thought to myself, “What the f… am I doing here?”.

At interval, I called a mate at the pub to tell him about the show. “What do you think?”, he asked, at which point I declared the show to be both one of the best, and one of the worst ABBA tribute shows I have ever seen. At that point my friend C, who had been to the famous ABBA concert in Perth, Western Australia, where they evacuated the entertainment centre due to a bomb hoax, suggested to our friend on the phone that he call Star City and make a bomb threat, so we would all have to leave.

Correct me if I’m wrong, but I think it was Jeff Kennett who famously described Star City Casino as an “RSL Club on steroids”, making it one of those lines I still laugh out loud about. Well, if Star City is an RSL on steroids, I have to say ABBAMANIA is an ABBA tribute show on steroids, and yet also cortisone. There were moments of absolute joy (literally “goose bump moments) with tremendous performances, such as “The Winner Takes It All”. There were also moments when I felt as though I was witnessing the world’s worst ABBA tribute show, such as when they sang “I’ve Been Waiting For You”. Although the song’s simple arrangement was quite good, it was sung with a “Nashville twang”. “Hive bheen whaiting ferrrr youuuuu”.

And that was a recurrent theme throughout the show: songs sung without meaning. I know what you’re thinking: what meaning could possibly be found in songs like “Mamma Mia” and “Bang A Boomerang”. But the truth is, when you listen closely to their music, even those songs with childlish lyrics are sung with such passion, joy and heartbreak. For example, the vocalist got “Gimme Gimme Gimme (A Man After Midnight) completely wrong in its interpretation. When Agnetha sang “There’s not a soul out there, no one to hear my prayer”, she was crying out for intimacy, not just a quick root.

Later in the night, I listened in to a couple of nearby conversations about the show. Almost without exception everyone had a great time. I also heard people say how “how close to the originals they were”. It was at that point I wondered whether or not they had seen the same show I had, and whether or not they’d ever seen an ABBA video clip or live concert performance to make an accurate comparison.

But in the same way that if you repeat a story over and over, even if it’s incorrect, it ends up becoming correct, ABBA tribute bands have developed their own mythology about ABBA, far removed from the truth.

Don’t get me wrong, I’m not one of those purists who hates ABBA tribute bands, as I’ve been to see quite a few. I’ve also seen “Mamma Mia” a few times, and I’m completely happy with other people re-inerpreting ABBA songs, and seeking to recreate their live performances. I probably would have enjoyed the show more, had they not decided to promote the show as a “re-enactment of ABBA’s last concert performance”. Because it wasn’t. Instead, it was like a tribute show of a tribute show, if you know what I mean. It was more like a Bjorn Again tribute show than an ABBA tribute show.

Anyway, aside from that, I’ve had a reasonably lovely week. I went to dinner tonight with a colleague and a group of her friends who were all absolutely delightful. And also last night I went to Fruits In Suits, a monthly event I often attend. While entering the venue I was greeted by a well-known Eastern Suburbs figure who was there, standing outside saying hello to people, and clearly identifiable, when at the same time he was supposed to be somewhere else.