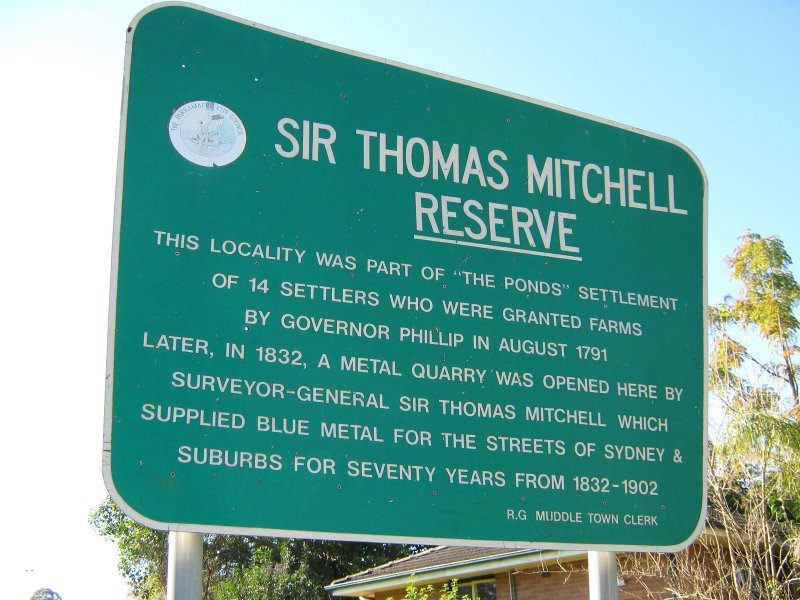 Today, my interest in genealogy took me to Dundas Valley near Eastwood. In particular, I wanted to find out more about the land granted to my GGGGG-grandparents, John and Martha Love, who came to Australia in 1791.

John Love, who was a member of the NSW Corps, was granted 30 acres of land at “The Ponds” (February 20, 1794) and a further 90 acres of prime land at “The Field Of Mars” (March 14, 1795). Later, however, he leased the land out to Captain William Kent, the nephew of Governor Hunter. The land was in the modern day suburb of Eastwood, with the historic “Eastwood House” now located on the land given to him.

A few weeks ago, fellow researcher, June Love alerted me to a plaque of some sorts which recognised the early land grant at “The Ponds” awarded to our common ancestor.

If my memory serves me well, the land at The Ponds was sold to Gregory Blaxland, nephew of The ‘Blaxland’ Lawson & Wentworth fame. William Cox who built the first road across the Blue Mountains also gets a mention. All the records of land transactions involving John Love were able to be viewed at The Heritage Centre, Parramatta. There is a Notice erected by Parramatta Council in Dundas Valley near the Rugby Club where John Love is listed as an original land holder (30 acres), and overlaid on the original land grants survey is the present subdivision. Because Eastwood historical records are quite comprehensive, the succession of ownership of the 90 acres on which Eastwood CBD is now situated is well documented.

Getting there was reasonably simple…

The signpost is very near the Dundas Valley R.U. Club – maybe known as Parramatta Leagues Club (sub-branch) – in Quarry Road, Dundas Valley near the intersection with David Street. Signs are dark blue with semicircular curve over the top and the sign at eye level. UBD Map Ref 192 F9. Nearest main Street intersection Evans Road and Yates Avenue. Although somewhat defaced more recently, it was still readable. Bronze in colour with black dots showing surveys, and resembles a lithograph (On the side where you are facing south/west as you read it). (A bit of a story on the reverse side)

What happened to John and Martha?

John’s career in the NSW Corps was at best mixed. Arriving in Australia as Private, he was promoted to Corporal (March 25, 1791) and then to Sergeant (June 26, 1791), though reduced to being a Private several months later (December 27, 1791). According to the book, “Sydney Cove 1791-1792″ by John Cobley, this later demotion resulted from depositions about an incident which occured on April 30, 1791 on board the Matilda. I have yet to discover what this was.

He was discharged from the NSW Corps on July 14, 1798, though he later re-enlisted, as the 1799 Muster records him as a Private in the Col. Francis Grose Company of the NSW Corps. Years later, he was reportedly mentioned in the Sydney Gazette (1814) for his capture of a deserter from the 73rd Regiment, one of a group of 17 bandits.

Despite being a member of the NSW Corps, whose job was to uphold the law, John Love had several convictions himself.

In common with other members of the NSW Corps, the “Rum Corps” John Love was involved in the production of rum. On Monday, June 1806, he was arrested and fined 100 Spanish dollars (one of the currencies in use at the time) after the discovery on his property at the Field of Mars of a still and other appartus for distilling liquor. The incident was reported in the Sydney Gazette of Wednesday June 6.

On Monday, in consequence of a like information, several Constables were sent to search for a still and other apparatus on the farm of J. Love at the Field of Mars; from whence a large boiler was produced, supposed to be for the purpose of distilling. The owner was in consequence ordered to find bail for his good behaviour.

In December 3 1816, John Love was convicted of stealing government cattle in collusion with two of his convict servants (Joseph Jones, Patrick McGinty) and all were sentenced to hang (NSW Records Reel 6006; 4/3495 p. 421).

His family appealed successfully for clemency, though it appears he may have been sent to Newcastle on the “Lady Nelson” for a period of time.

On account of some favourable circumstances in mitigation of his offence I am induced to extend Grace & Mercy unto him and to grant unto him the said John Love a Pardon for his said crime as the sole and express condition that the said John Love shall continue to reside as a convict in the Territory of NSW and the dependancies during the term of his natural life and be kept at hard labour ‘Macquarie’” The pardon was to be null and void if he were found outside NSW.

In a petition to the governor, the Superintendent of John Oxley’s farm requested the sum of 100-pounds to be repaid for the forfeited property.

It’s difficult to know whether these brushes with the law were the consequence or the cause of long-term economic problems.

The Court of Civil Jurisdiction, for example, ordered that the Seymour Farm had to be sold in 1814 to recover debt.

Ex parte William Packer, in the matter of Joseph and John Love: Pursuant to an Order of the Court of Civil Jurisdiction, ande in the above matter, the Provest Marshal will cause to be set up for sale by public auction at the Market Place, Sydney, on Thursday the 25th instant at Twelve o’clock, a certain farm and lands, called Seymour’s Farm; containing 80 acres, more or less and situated in the Field of Mars (unless the Debt Costs and all incidental expenses are previously liquidated.) Wm Gorr, Provest Marshal.

And after John’s conviction for stealing cattle, Martha was forced to mortgage the farm (on August 13, 1817) and a mare and foal were sold to Thomas Moore for 45 pounds.

Further evidence of their economic woes came in 1824 when their young son John (well, reportedly their son, but perhaps more likely their grandson since he was too young to be there son) was placed in the Orphan’s Home and died, aged 9 with dysentery June 29th, 1824.