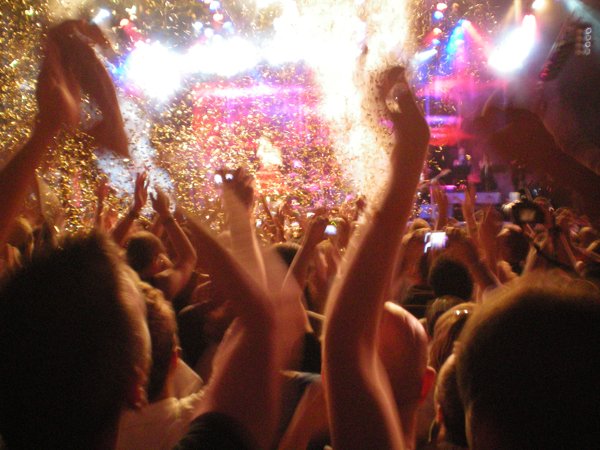 You know how I mentioned yesterday the drag queens at Europride made a very funny joke about Eurovision. Two drag queens dressed in full-length berkas came on stage and were announced as this year’s winners of the song contest. In essence, it was about the changing face of the Eurovision Song Contest due to the introduction of many new Eastern European countries.

This change has meant a whole range of new musical sounds in stark contrast to the popular styles of Sweden and many other Western European countries. And it’s a change a lot of people in Western Europe aren’t happy about, especially when they also see voting blocks emerge between neighbouring countries. I actually don’t see it as anything sinister of parochial, I just think it’s an example of common cultural interests. A bit like how the UK and Australia like each others tv shows and music. We just understand each other.

But in Sweden, most Eurovision entries continue to be examples of “schlager”, a genre of pop music that’s generally known as happy and joyous, even if the lyrics are sometimes about unhappy subjects. Almost always, the songs are fairly short, and they’re always sung with a great deal of passion. I love it.

Schlager probably goes back to the 50s and 60s really, and has its roots in Germany, Sweden and other central European countries. I was lucky enough, in fact, to see one of the great Swedish schlager singers, Lill Babs perform today at Europride.

She was a big star in Sweden in the 60s, appearing regularly on television and recording Swedish versions of American and English hit songs including, “It’s My Party”, “Itsy Bitsy Teeny Weenie Yellow Polka Dot Bikini” and “Lazy Hazy Crazy Days of Summer”. In 2008, her voice is a bit lower, as you might expect from a woman her age, but she still sounds great.

And she knows how to work the crowd. She was still signing autographs when she was called up on stage to sing. And before that, she came down to the audience and just stood there amongst the people waiting for her cue.

Once onstage, she flirted with heaps of men, sang with a great deal of enthusiasm and passion, and told a number of anecdotes including how she met Sammy Davis Junior.

And although pop music has changed a lot since then, the Swedes still love their schlager.

And while the rest of Europe has been experimenting with new sounds at Eurovision, the Swedes have, with one or two exceptions, been doing the same thing every year since ABBA won in 1974 with “Waterloo”.

Sweden, of course, won again in 1999, twenty-five years after ABBA with the Waterloo-inspired “Take Me To Your Heaven” by Charlotte Nilsson. She even dressed like a member of ABBA, as I recall.

Charlotte was in Eurovision again this year under the name Charlotte Perelli, with a great happy pop song called “Hero”. Since she won in 1999, she’s been through a marriage and a divorce, and, by the look of things, a terrible facelift.

Charlotte was one of a number of Eurovision winners who performed at tonight’s “Schlager Night” at Europride. She was also joined by other members of the Eurovision winners alma mata, including Dana International (the transexual from Israel) and Teach In, who won in 1975 with one of my personal favourites, “Ding Dang A Dong”. And I think there was some bloke from Sweden who won in the 80s long before I began to take an interest in such things.

And there was also a performance that terrific couple of Belgium who always feature in those Eurovision compilation videos because of their silly dance routinein tight purple outfits. “We’re still married thirty five years later”, they told us, “and we fly the rainbow flag in our front yard”. At which point, my mate Paul said softly, “Yeah, just take a look at the husband and I bet they do”.

But while there were big names, it was the local favourites who people really wanted to see. Singers like Sanna Nielson, Frida feat. Headline and Lena Philipsson.

Lena was the big hit of the night actually, invited back for a couple of encores. “Lena, Lena, Lena” the crowd kept shouting.

While many artists outside of Sweden would be insulted if they were asked to sing the same song again, that’s not the case here. So many artists elsewhere would insist on singing a b-side or an album track when called back for an encore. But in Sweden, and at Schlager night, a number of artists happily came back and provided the audience with a reprise of their big hit song. Charlotte, for example, sang Hero twice, simply because the audience asked her to.

And what a response they all received. I don’t know how many people attended, but it was in the tens of thousands. And almost everyone sang along with every song. There was happiness, there was joy, there was much schlager to be enjoyed.

I was a bit overwhelmed by the experience, to be honest. It was great to be in a large crowd where there was such joy and happiness in listening to music.

And like I said yesterday, there was just no evidence of the drug culture you often find associated with gay and lesbian events in Sydney. Cheers!