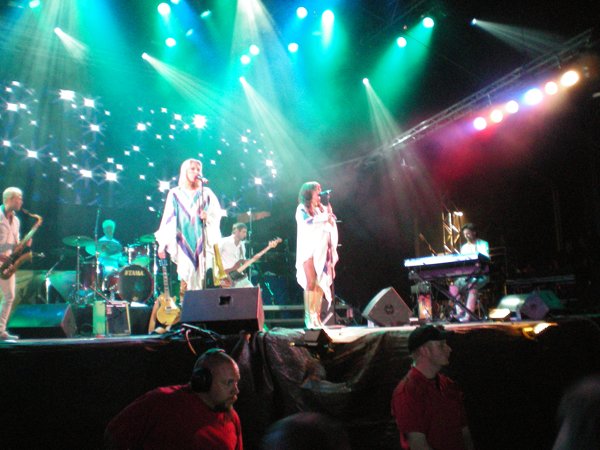 As soon as I saw his name in the program, I headed straight for Pride Park. I’m talking about Carl Magnus Palm, the author of six books about ABBA, including “Bright Lights Dark Shadows”, the definitive ABBA biography to date. Oddly enough, the book has never been released in Sweden due to a range of contractual matters.

“Oh my god, what are you doing here”, he said to me, recognising me from about seven years ago when he visited Australia. I was genuinely surprised he remember me, though someone may have tipped him off. Anyway, after his initial surprise at seeing someone from Australia in the audience, he told me it’s a book that contains a lot more information, but also a lot less than “Bright Lights”. There’s less about Bjorn and Benny’s solo careers prior to ABBA, and more about what’s happened since the release of the “Bright Lights”. It’s so up to date, it will contain information about the premiere in Stockholm recently of “Mamma Mia”, where all four members of the group were united briefly.

In the brief interview, he did on the “Author’s Stage” at Pride Park, he was reasonably candid. He was asked why ABBA had a gay following and hypothesised on why. He also said there were a number of rumours that Frida was a lesbian. “There are people who will swear it’s true, though I don’t believe it”, he said. He estimated about 75% of the “hardcore male fans” (as he described them) are gay.

In writing six books about ABBA, he was asked if he was a hardcore fan. He replied he wasn’t, “Well not in the sense that I live my life around the people and want to be near them”. In fact, he said that when he was growing up, he didn’t think it was cool to like ABBA, and only really developed an interest in the group after they broke up.

He also spoke candidly about his experience last year at meeting Agnetha. “She’d only ever replied to my interview questions in writing”, explaining why he hadn’t met her until then. “It was at the release of a book about Metronome Studio”, he recalled, saying he was quite shocked to see her for the first time in the flesh.

Today, I was in the second row as she sang the song with as much if not more enthusiasm than she did a dozen years ago. “I love Stockholm. Thank you so much for supporting me”, she said on a number of occasions, remembering her performance ten years ago when Sweden hosted Eurovision.

“And I love the fact you speak English”, she laughed. At that point, she invited a couple of Swedish drag queens she’d met earlier onto the stage.

Another highlight, from the Swedish drag queens, was a piss-take about Eurovision. In a decidedly un-PC moment, two drag queens wearing full-length berkas came out, backed by Middle Eastern music, and were declared this year’s Eurovision winners. You could almost hear everyone in the audience under their breath say “I know I shouldn’t laugh, but that’s incredibly funny”. Without any European baggage of my own to contend with, I laughed out loud, as they made fun of the changing nature of the Eurovision Song Contest, because of the changing nature of Europe.

But of course, the day’s entertainment highlight was seeing the ABBA cover band, Arrival perform as the evening’s major act. “I can’t see the end of the crowd”, Frida declared at one point, genuinely surprised at the large number of people attending.

I agree with everyone else who has told me when it comes to ABBA tribute bands, they’re about as good as it gets. They take the music seriously. In fact, they were joined on stage by Finn Sjoberg who played many years ago with ABBA. And they don’t do those stupid accents, and the crowd loved them for it. They particularly played to the hometown audience with their Swedish language version of “Ring Ring”.

I was lucky enough to be joined in the second row by two fellow members of ABBAMAIL, Tony and Stephen (who made it, despite problems with his plane bookings). We danced and sang and had the time of our lives. We even chatted to a few locals who were also big ABBA fans.

You can do that because in some ways, Stockholm Pride is a bit daggy and a bit “hometown”. There’s a fair bit of “community theatre” (which is dodgy at the best of times), the drag acts fail to live up to the standard of some of the worst gay bars I’ve been to, and there’s endless talk. Talk, talk, talk. I don’t know why, but a common characteristic of every musical act I’ve seen on this trip has been overly-lengthy spoken introductions for each song.

But these elements are also what gives Stockholm Pride the charm and honesty that Sydney’s Mardi Gras lacks. Unfortunately, Sydney’s event, these days, is all about a generic international gay culture, defined by a particular type of male body, a type of sexual sleaziness, a particular style of music, and a huge drug culture.

In contrast, I don’t think I saw any evidence of a drug culture today. There was no evidence of people shagging mindlessly in the bushes. And there weren’t even too many people who were pissed. Mind you, it’s only day one and things could change. I’ll keep you posted, and happily admit if I’m wrong.