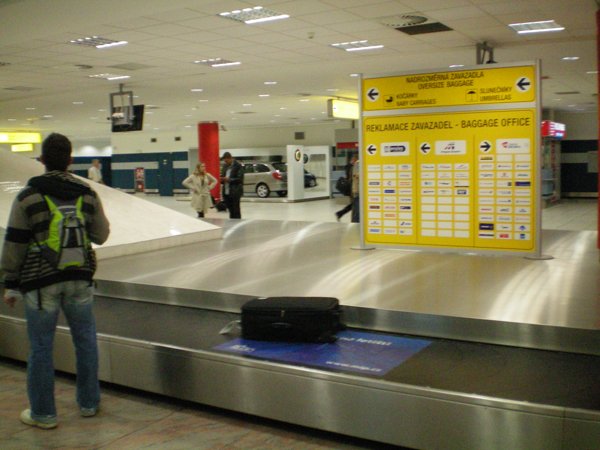 So which airport would you like me to describe first? Today, I’ve visited three different airports in three different countries: Latvia, Belgium and now the Czech Republic. And although it sounds like a bit of a drag – all in the name of a cheap airfare – it was actually loads of fun.

My first mistake though was joining the queue at Riga Airport this morning. By the time I’d arrived – 75 minutes before my flight – the queue was already out the door. What I hadn’t realised was that wasn’t the queue I needed to join. My queue had only 5 people in it by the time I’d realised the error of my ways. When I told the woman on check-in how long I’d been waiting in the wrong queue, she just smiled. Maybe as some form of consolation, she gave me an excellent three-person seat all by myself.

Airport security at Riga was fairly intense. Much tougher than anything I’ve ever seen in Australia. I’ve never, for example, been asked to take my belt off as a matter of course, since I know my belt is “airport safe”. And that’s when I thought to myself, I’m glad they’re being tough as “Riga Airport” sounds just like the kind of place for a hi-jacking or terrorist plot in one of those page-turning novels you pick up and read on planes.

Still, all of this queuing wasn’t so bad after all, as I had time to look around, check out the people flying, all of that stuff I love doing. The only unfortunate thing about the waiting time in the queue was having to listen to the inane ramblings of an awful American bloke behind me. “Did you bring your pretty red shoes?”, he said in a syrupy-manner to his Latvian-born wife at one point. And then when he told her he loved her because she smelled pretty, and began singing a little made-up song about how why he loved her because of the way she smelled, I just about vomited.

Meanwhile, in Brussels, there were two poofs sitting close to me in the departure lounge. I didn’t recognise them as poofs at first until I noticed one of them was wearing gold sneakers to match his black t-shirt with gold printing. Case closed, I thought to myself at that point. He looked over at me and smiled and then said something to his friend in that secret code “the gays” (as Andrew likes to call them) seem to have.

I slept most of both flights, so by the time I arrived in Prague I was feeling well and truly rested. Getting into town was smooth – I used one of those mini-buses – as was getting a week-long public transport ticket. Thirty dollars or so will cover all public transport for 5 days. And the hostel. Wow, it’s so clean and modern. And so far, everyone I’ve had dealings with customer-service wise has been so incredibly friendly. After some of the grumbles and sneers (and incompetence) I’ve found in other places, it’s been a really welcome change.

Here at the hostel, for example, the staff have been tremendous, offering maps and advice. Everything you could want. There’s an English bloke here who has also offered a few tips along the way.

I haven’t seen enough of Prague yet to make any serious judgements. What has surprised me, though, is how “western” the place has become so quickly. The big firms like H&M, Tesco, Marks & Spencer have all moved in to dominate retail. And McDonalds is EVERYWHERE. The contrast between the two previous Soviet states and this one could not be more extreme, in terms of their transition to capitalism.

Also, I absolutely agree with the assessment that Prague is a beautiful city. I’ve only walked around a little of the city, but the ornamentation on some of the older buildings is heartbreakingly beautiful.

I’ve been lucky with the weather too. It’s shorts weather today, and the evening continues to be warm. I was thinking of doing a three-hour historic pub tour, but a text message from Damo talked me out of it, when he conveyed how expensive it really was. I’ll probably just spend the night here at the hostel looking for lots of lovely things to do tomorrow.

I’ll have something more sensible to say tomorrow, I’m sure.