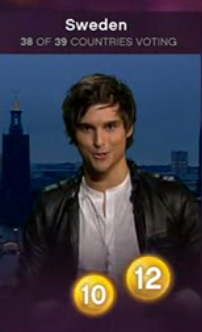 Eurovision came and went for another year. And without Sweden participating, I guess my heart wasn’t really into it this year.

The thought of staying up late on a Sunday night, or going out to a club to watch it on a big screen was all a bit too much.

A couple of friends and I decided instead on a late-afternoon download and screening of the UK broadcast.

It wasn’t easy. Unlike, for example, Melodifestivalen which is quickly and widely shared on that site which shall not be named, the process of getting a copy of Eurovision took considerably longer than we antipated.

The quality of songs this year was quite good, and I liked the winner. I reckon a night out on the town with her in Berlin could be fun, though I also think you just know it would end with her crying in the gutter outside a bar somewhere. A bit emo.

Despite the quality of Eurovision, Melodifestivalen had at least half a dozen songs better than many of the songs on this years ESC. I think Sweden should dig deep into its pockets, throw up some cash, and be guaranteed a place entry every year, making it the big five, not the big four. Maybe the man from IKEA could throw them some money. Or maybe H&M could throw in some cash in exchange for everyone wearing mid-priced consumer fashion?

As I recall, there were Swedish songwriters representing five countries as it was. Ironically, the only Swedish entry that didn’t make it was actually Sweden.

Minus Sweden, I settled on Iceland as my favourite due to the song, it’s neighbourliness to Sweden, and because I felt a kind of pity for all they’ve been through over the last few years with the volcano and the economic crisis.

And minus Sweden, I was able to concentrate on one of my favourite parts of the contest: the painfully slow record of voting, and the various crosses around Europe.

Here’s a selection of my favourites…