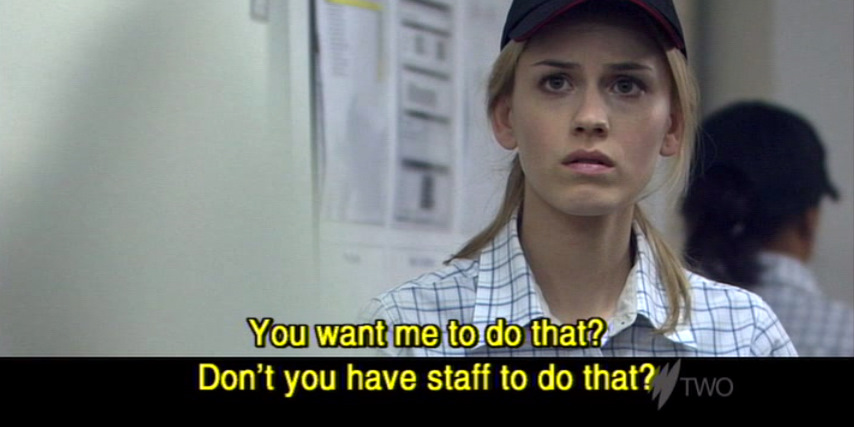 There was a really beautiful Swedish film on SBS-2 tonight which I stayed up to watch. At the centre of the film was an unexpected, albeit brief friendship between an older man and a younger woman.

The younger woman is, for most of the film, quite an appalling character. She’s the stereotypical Gen-Y. When she is sacked from her job for not paying enough attention to customers and for taking too many personal calls at work, she responds with “It’s not my fault if they don’t buy clothes, and it’s not my fault if my friends call me” (or words to that effect).

While at the same time that she’s not working very hard, and buying lots of clothes, and living a reasonably fine young middle class lifestyle” (She lives in Östermalm, a reasonably well-to-do part of Stockholm), she’s also not paying her bills. Eventually, she’s forced to seek unemployment benefits, but doesn’t qualify because she hasn’t worked long enough. She takes a job at McDonalds purely so she can make up the three or four weeks of paid employment to qualify.

At McDonalds she meets the older man. In contrast, he’s 61 years old, is recently divorced, and is desperately seeking work, but having difficulties because of his age.

The contrast between their two lives and attitudes is significant. She blames the world for her mistakes. He accepts his shortcomings and gets on with it.

Nonetheless, they form a brief friendship. Each of them fills something missing in each other’s lives: he has a distant daughter, she has a father she hasn’t spoken to for quite some time. Beyond that, I won’t go into further detail, or else I’ll spoil the plot, the film’s culmination.

I thought it was a really beautiful film. The characters are very likable people, despite their obvious flaws. It’s also a simple story told well, against the background of some beautiful Stockholm imagery. It’s a dark film – a lot of it is set in October/November months you might imagine, ahead of the arrival of the snow – and there are lots of night-time scenes. The film also has a very contemporary setting in bars and nightspots around Central Stockholm. The film also has a gorgeous musical accompaniment.

I’ve saved the film on my computer for later repeat watching.