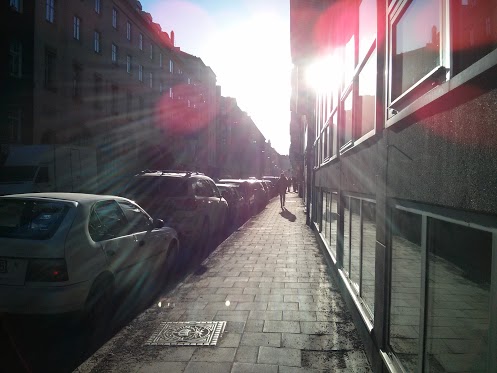 Art and About Tuesday

The “day” started a little later for me, as I enjoyed a reasonably good “sleep in” this morning, after last night going out for a drink at Torget.

After a moment or two of sitting by myself, I was befriended by a young bloke who told me he was originally from the far north of Sweden, near the border with Finland. He told me he was planning to return there after he and his partner get married in about six months time. “How long have you known each other?”, I asked. He blushed when he told me it was less than twelve months. I assured him I knew heaps of people who’ve begun long term relationships which involved living together soon after meeting (myself included).

He was a friendly type, and so introduced us to two other blokes seated nearby. For the next couple of hours we engaged in a terrific conversation about identity, language, politics and so on. It was really, really enjoyable, and really nice to connect with some locals. The conversation was so good that it was past midnight when I made it home to sleep.

So this morning I had a little sleep-in, and watched a bit of morning television before heading out for my daily routine of a morning coffee, and a bit of sight-seeing. As much as I thought I knew Södermalm very well, I found myself discovering parts of the island I’ve never seen before, which was very exciting.

It was then I began to imagine my life in retirement. Admittedly, it’s still twenty years to go (or thereabouts), but I found myself sitting on park benches, enjoying the view, watching the world go by, and exchanging pleasantries with older women. STOP! I’m not ready for that yet, and so went out in search of some interesting, challenging art to view.

I discovered a really terrific exhibition of photographs and videos by Tova Mozard. Although much of her work is centred on the United States, she was born and lives in Sweden.

There’s quite a bit of video work in the exhibition. There’s a lengthy black and white piece, for example, in which a middle-aged man is telling his life-story while digging a grave. He tells the story of an early life with an alcoholic father, spending time in an orphanage, taking lots and lots of drugs, and fathering and then leaving children. When he uttered the words, “When I went to prison”, I decided I couldn’t take any more. It was all a bit too grim, and so I wandered on.

Later I found a video piece which I quite liked, which featured an older woman who was possibly a cabaret singer in her early life. As she told the story of her life, she would sometimes burst into song, half-remembering the lyrics of the songs she had sung during her cabaret career.

There’s definitely a “blackness” to much of Tova Mozard’s work, as many of the photographs dealt specifically with death. There was everything from a rather touching photograph of an older man and a younger woman (father and daughter, I thought) with grief-stricken faces, to a photograph of the “Bates Hotel” sign, underscored with “No Vacancy”. Another favourite was a young man and a woman standing in front of the grave of Jean-Paul Satre and Simone de Beauvoir.

I liked the exhibition very much, and it was a lovely way to spend a couple of hours.

And then later this afternoon/earlier this evening I went to the Östasiatiska museet (East Asian Art Museum) on Skeppsholmen, which has an IMPRESSIVE collection of art from Japan, Korea, China etc. I’m not really one for the antiquities; I’m much more interested in contemporary art. And there’s a terrific exhibition there called “Secret Love” which is about homosexuality in China.

One of the most impressive works for me is a four panel work called “Hello Comrades” which one the surface, purports to show just lots of faces involved involved in similar pursuits including construction, the military, and playing ping-pong. When you look more closely, however, there are obviously homosexual images. The same “hidden” depiction is also found in a series of paper cuts in a dark room which only become apparent when light is shined on them. Most memorably, there’s a video work which depicts a demonstration of and public reaction to same sex couples seeking to be married.

I actually went on a tour of the exhibition delivered entirely in Swedish. I estimate I understood about 40% of what was said. Even if I missed some of the jokes along the way, I understood most of what was being said to convey issues and ideas covered in the works. There was one point when the tour guide asked all of the group what we thought of a particular work. He looked directly at me first for a response. Although I could have resorted to the Swedish word for all occasions, “bra” (good), I looked to the woman standing next to me, and thank goodness she responded.

On arriving home tonight I was greeted by the first fall of snow on this trip. It’s pretty light. Just a few flurries. I’m hoping that when I wake in the morning there’ll be white streets to great me.