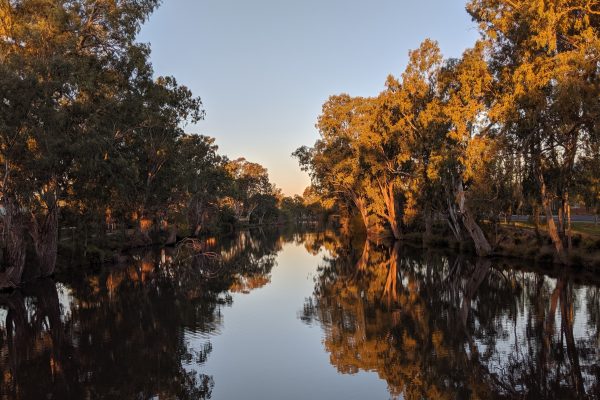 It’s Sunday night, I’m in Wagga Wagga and I’m killing time, ahead of catching the XPT back to Sydney. Though I’ve gone first class on travel, I’ve booked economy for accommodation for my brief visit back to Wagga.

I’ve been staying at Romano’s. Co-incidentally, it’s the place where I stayed for my first week in Wagga Wagga, when I moved here at the end of 1991. For a moment, I thought I might have been staying in exactly the same room as I was almost thirty years ago. I have a strong memory of a “romantic liaison” in the hotel room here. The room has changed little. The beds are the same, the furniture is the same, and the shared shower facilities are most definitely the same. They’ve done a terrific renovation on lower floors of the hotel, which clearly hasn’t made it to Level 2 (especially the bathroom). But that’s all okay, as this was always a brief, nostalgic visit.

This visit also has a “death” theme to it all. My friend Kate, who I met here many many years ago, is back here to support her son, as he winds up his father’s estate. When Kate mentioned she was coming, I asked if she would like company for the trip down. So yesterday morning, we began a road trip, taking in sites like The Big Merino, The Dog On The Tuckerbox, and serial stops along the way to look at the mixed-emotion beauty of paddocks filled with Paterson’s Curse and Canola, and to see the Murrumbidgee River.

I’ve been trying to remember how I felt when I left Wagga Wagga at the beginning of 1995. As I recall now, I was still pretty happy about living here. I’d made an excellent circle of friends, in part due to my involvement in co-establishing the Riverina Gay and Lesbian Social and Support Group. I had a very “social” house, located on the shores of Wagga’s Wollundry Lagoon. Here, I’d fulfilled a few of my career dreams, and thought it was probably time to move on, which is why I’d moved to Sydney.

There was a further trip down memory lane, as I revisited the studios of ABC (Radio) Riverina, Wagga Wagga. This was my second ABC Radio station, having previously worked at ABC Radio in Renmark, South Australia. A lot can happen between 1992 (aged 26) and 2019 (approaching 54). Many thanks to Mollie from the bureau (station) who let me in and took the pic.

As I wandered around the city, I was reminded of some of the wonderful people I met here. A few of them are no longer with us, including Colin Anderson and Chris Jones.

Others, I am still friends with, including Glenn and Greig, and Kate. It was a really wonderful period of my life, and I look back on it with much fondness. It’s been great to enjoy a trip down memory lane.

Suitably, my weekend ended with some theatre. My friend, Kate alerted me to some “Shakespeare In The Pub”, she’d seen mentioned in the paper. Without much thought, I booked some tickets to https://bardwork.com/. The show was a modern, abridged, and very colloquial version of “Twelfth Night” which I enjoyed very much.

And suitably, the production was in the downstairs restaurant.

With about an hour to go until the train back to Sydney, I feel like I’ve come “full circle”.